The Trudeau government is promising $300 million in foreign aid over the next three years to help the hundreds of thousands of ethnic Rohingya affected by a brutal campaign of violence by Myanmar's military.

Bob Rae, Canada's special envoy to the region, has called for more money to help the situation

Federal cabinet ministers pledged money and diplomatic leadership on Wednesday as they promised that Canada will spearhead international efforts to stop the campaign of ethnic violence against Myanmar's ethnic Rohingya people.

Yet Foreign Affairs Minister Chrystia Freeland and International Development Minister Marie-Claude Bibeau also found themselves on the defensive as the amount of Canadian aid dollars earmarked for the crisis fell short of expectations. 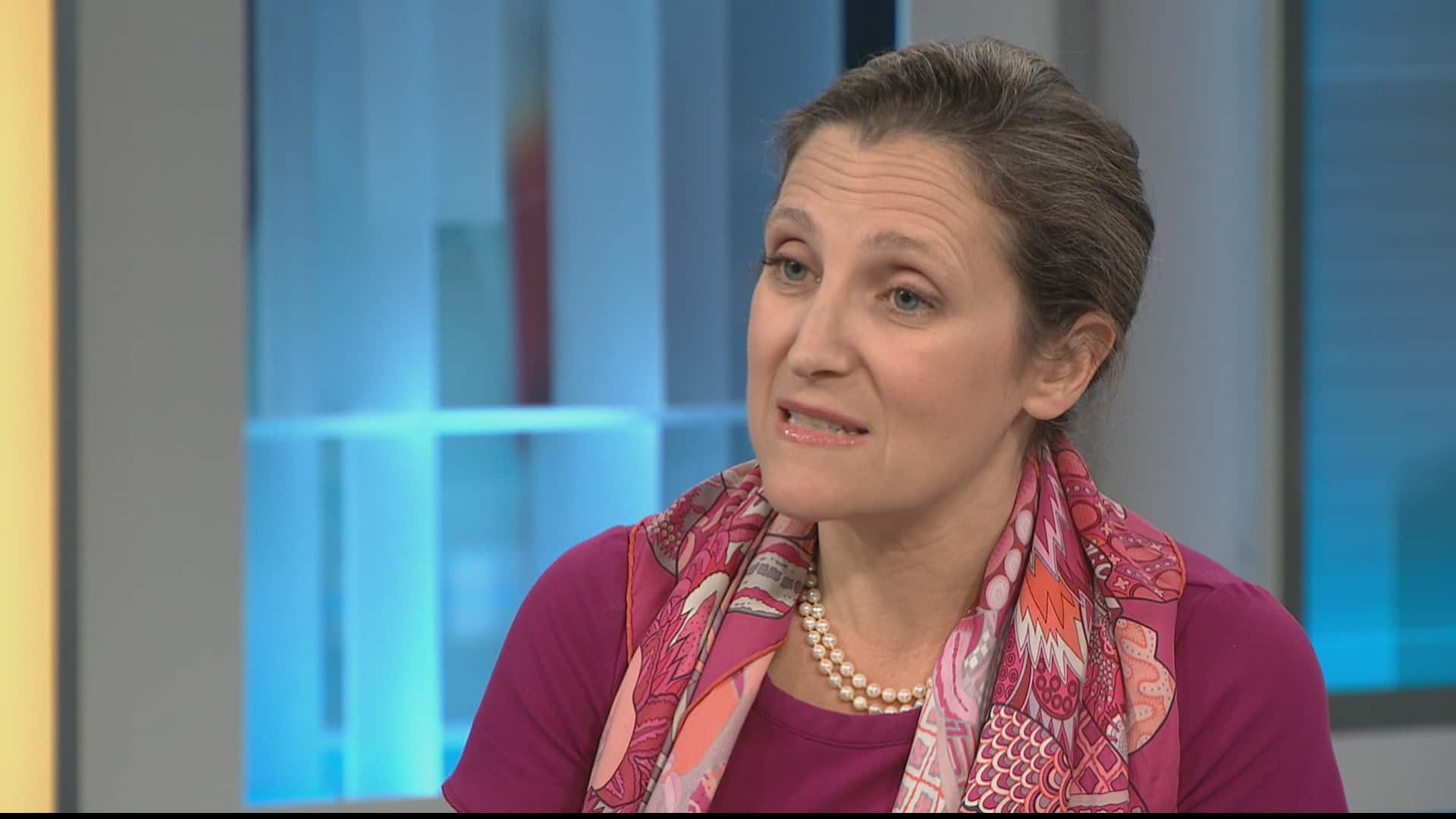 2 years ago
9:07
'We always believe in being polite and fact-based,' says the Minister of Foreign Affairs on Power & Politics. 9:07

Bob Rae, Canada's special envoy to Myanmar, called on the government last month to set aside $600 million over the next four years to help the hundreds of thousands of Rohingya Muslims affected by the violence.

Freeland and Bibeau, however, announced during a news conference that Canada would contribute $300 million over the next three years, which will go toward emergency assistance and education and reproductive health programs.

The ministers admitted their plan amounted to less than Rae had requested, but said it still represented a significant amount of money and was largely in the spirit of his recommendation.

"We carefully evaluated the situation, the report by Bob Rae and other humanitarian crises that are currently ongoing," Bibeau said in French.

"Canada needs to do its fair share, but also take into consideration that there are several crises happening. The $300 million over three years is a major response."

The money is expected to be channelled through the UN, the International Committee of the Red Cross and various NGOs and will include a specific focus on helping women and girls, especially those dealing with the aftermath of sexual violence. Bob Rae on the government's response to his Rohingya report

The government's plan for this crisis, which Freeland described as a classic case of ethnic cleansing, comes amid mounting concern from foreign aid and human rights groups about the fate of the Rohingya.

Freeland promised that Canada would support efforts to hold those responsible to account.

'No place to hide'

That includes imposing sanctions on those in the Myanmar government and military deemed responsible for atrocities against the Rohingya and supporting any UN Security Council referral to the International Criminal Court.

"They will face justice," Freeland said. "The world community is watching. We are determined. We will stick to this. We will gather our facts. There will ultimately be no place to hide."

Human rights groups have reported mass executions, rapes and arsons by the Myanmar military, which is predominantly Buddhist, though Amnesty International reported evidence Wednesday that Rohingya armed groups had massacred dozens of Hindus.

"There is certainly violence on both sides, but I think it's very important not to muddy the waters here," said Freeland, who noted that there were reports of serious atrocities against an estimated one million Rohingya.

"The core objective is for the crimes against the Rohingya to stop. And persecution is still happening and people are still fleeing."

Despite that, the ministers said the government doesn't have any plan — at least not yet — to begin resettling some of the estimated 700,000 Rohingya who have fled Myanmar and are now living in squalid conditions in neighbouring Bangladesh.

Canada will instead work with other countries and the UN to come up with a broad international plan for resettlement, the ministers said — at which point Canada will stand ready to resettle the most vulnerable families and individuals.

In the interim, the government will expedite applications from family members already here.

"The most important thing to understand is the Rohingya, the vast majority of them, want to go home," Freeland said.

Noticeably absent from the ministers' comments was another major issue: how to address the matter of Nobel laureate and honorary Canadian citizen Aung San Suu Kyi, Myanmar's de facto political leader who has been widely criticized for not speaking out against the atrocities being committed against the Rohingya.

However, the Liberal government previously has expressed the view that Suu Kyi is not in charge of her country's powerful military, which once held her under house arrest and that targeting her does not address the main crisis.