An Ottawa-based Chinese reporter covering Prime Minister Stephen Harper's tour of the North was hauled away by RCMP officers after he was denied the chance to ask a question and grabbed a microphone. 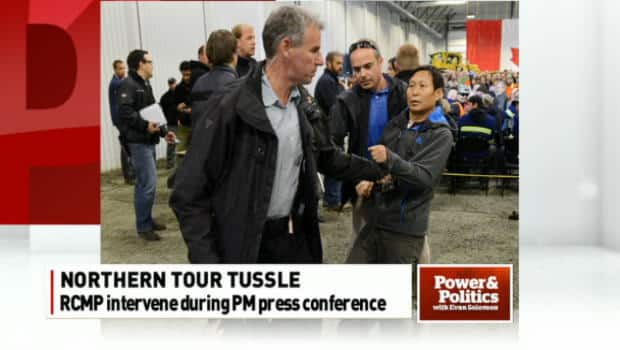 7 years ago
0:22
A Chinese reporter travelling with Prime Minister Stephen Harper's Northern tour was hauled away by RCMP after grabbing a microphone to ask a question 0:22

A Chinese reporter was hauled away by Prime Minister Stephen Harper’s RCMP security detail Friday after he grabbed a microphone and tried to ask Harper a question during a news conference at a mine in northern Quebec.

The reporter had just been involved in a brief physical altercation with Harper’s press secretary, Julie Vaux, as he waited in line to ask his question.

Li Xue Jiang, Canadian bureau chief for the Chinese People's Daily, is one of 10 reporters travelling with Harper on his tour of the North this week.

The tussle came on the last stop of a six-day trip that featured some frayed nerves and sharp words between reporters and members of the Prime Minister’s Office, but was generally seen as relatively smooth considering its length and the rough nature of the travel.

Video of Friday’s incident shows Li brushing Vaux's hand away, and then later shoving her.

A few minutes later, Li grabbed a microphone being operated by a member of the Privy Council Office. After a brief tug on the mic, three members of the RCMP team assigned to protect the prime minister grabbed Li and hauled him to the back of the room. He was only briefly detained.

Li says Vaux pushed him first and was trying to get him to step out of line.

The prime minister's director of communications, Andrew MacDougall, responded to the incident on Twitter.

"Agree or disagree with how events are run, there was no excuse for the Chinese state reporter to get physical with our staff," he wrote. "We will be raising the matter with the [parliamentary] press gallery and Mr. Li should apologize immediately."

The press gallery is the organization that represents journalists who work in Ottawa covering politics and Parliament Hill. Li is a member of the gallery.

As is now common practice at Harper news conferences, the number of questions is decided by the prime minister’s staff and announced to members of the media, who determine by consensus which issues need to be addressed and which reporters are best to pose them.

Political reporters have long complained about the practice, but Harper’s office for years has refused to do things any other way.

On this trip, the prime minister’s deputy director of communications, Stephen Lecce, changed the established practice and instead alternated which reporters he would call upon — one group the first day, the remainder the next.

The two Chinese-language reporters on the trip did not ask for questions until Friday.

In advance of Harper’s news conference at Raglan Mine, reporters were told they would get either four or five questions in English. On this trip, the fifth question has gone to a reporter from the local media. There were also one question reserved for French-language media

Among themselves, the travelling media agreed Li should have a chance to quiz the prime minister on a topic that mattered to his readers and would provide the rest of the reporters with potentially useful material.

"I wanted to clarify the federal government policy and the regulations toward foreign state-owned company investment," Li said later.

The other media members offered to dump one of their questions so Li could ask his. At first it seemed that plan would be acceptable. In fact, Li said Lecce asked him his name in order to add it to his list.

In the end, Lecce stuck to four questions in the alternating format and refused to allow Li to occupy a slot voluntarily vacated by a Canadian reporter.

The first sign of trouble arrived before the news conference even began, when Li was heard speaking to Lecce and saying, "It’s unfair. Not fair."

Later, Li was seen stomping toward Lecce and having another animated conversation.

As the CBC was called on to ask a question on Syria, press secretary Julie Vaux spoke to the Privy Council Office audio technician who operates the media microphone.

Vaux then started whispering to Li in the media line and Li was heard again saying, "unfair, unfair."

The video reveals that Vaux was talking to Li and perhaps touching him. Li is seen responding angrily and pushing Vaux. He then turns his attention from her and, as she tries to talk with him, he shoves her again.

"She asked me to give up this question to your Canadian journalist," Li said later, adding he told Vaux it was his last chance on the trip to ask a question.

"I didn't agree to give up. So I am in the line, and ready to ask a question and she grabbed me several times, so that's why I pushed her," Li said.

Following the CBC's question, Lecce called another reporter to the mic. At that point, Li tried to grab the microphone from the technician, "to ask a question," he said.

Three RCMP officers were nearby and grabbed him.

The highly trained unit is deployed wherever the prime minister goes and travels with him in order to protect him, though it is unclear what risk, if any, they believed Li posed.