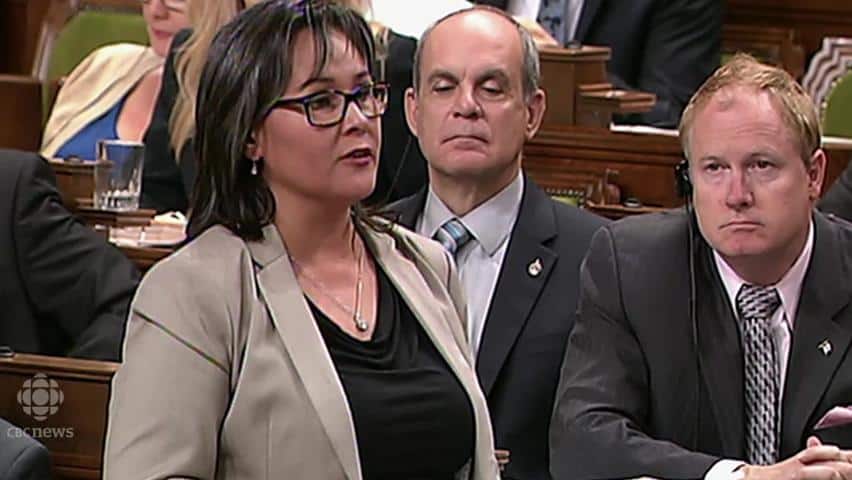 6 years ago
1:17
Environment Minister Leona Aglukkaq tells MPs the government has ordered the RCMP to drop a plan to stop using muskrat fur on its hats. 1:17

The Conservative government says it is overturning an RCMP decision to doff their muskrat hats in favour of more animal-friendly tuques.

Environment Minister Leona Aglukkaq told the House of Commons that the public safety minister is directing the Mounties to reverse the move.

The RCMP recently wrote to an animal-rights group to say it had found a tuque that works well in very cold weather and would therefore begin buying them for officers.

The Association for the Protection of Fur Bearing Animals says muskrats are caught in body-gripping traps, which can leave them exposed to the elements, dehydration, starvation and predators before they die.

The association says a single fur hat like that traditionally worn by the RCMP requires at least three muskrat pelts.

Aglukkaq, who hails from Nunavut, is a staunch supporter of fur trappers.

Association spokesman Michael Howie heard the news with "a combination of shock and disgust."

"The RCMP made a decision based on facts, scientific testing and the collective attitudes of their members and the public," Howie said. "The government of Canada is clearly trying to pander to a dwindling industry and disregarding the rest of the country's views."

In the Commons, Conservative MP Robert Sopuck said the "egregious anti-fur decision by the RCMP" had threatened to devastate thousands of livelihoods.

"The fur trade is vital to the economy of many remote rural communities — communities who often have few other economic options."

Howie said the majority of Canada's fur cultivation actually takes place on factory farms where hundreds of thousands of mink and fox are kept in tiny cages and slaughtered for their skin.

The association has launched an online petition demanding the government honour the RCMP's original decision.

"Interfering with what the public clearly believes in is what is disrespectful here," Howie said. "And right now, we are disgusted with our government."