RCMP Commissioner Brenda Lucki today defended the conduct of Mounties in Nova Scotia against claims that the police have done little to curb the violence directed at Mi'kmaw people behind a lobster fishery.

RCMP Commissioner Brenda Lucki today defended the conduct of Mounties in Nova Scotia against claims that the police have done little to curb the violence directed at Mi'kmaw people behind a lobster fishery.

Lucki rejected Indigenous Services Minister Marc Miller's assertion that the RCMP has "let down" the Mi'kmaw fishermen grappling with arson and abuse apparently linked to a local conflict over the Indigenous fishery.

"We must also recognize that once again, as evidenced by the scenes of violence, Indigenous people have been let down by the police, those who are sworn to protect them," Miller told reporters Monday.

Lucki was asked today whether she agrees with Miller's description of events.

"Absolutely not," she said.

She said the RCMP has a liaison team working on the conflict that's composed of Indigenous officers from Nova Scotia who understand the longstanding fishery issues well.

Chief Mike Sack — the leader of Sipekne'katik First Nation, the band behind the lobster fishery — has said RCMP has been "useless" to this point because the force has not sent enough officers to the area.

Hundreds of commercial fishermen have been effectively blockading the fishery, he said, and the few officers on hand are powerless to stop them. 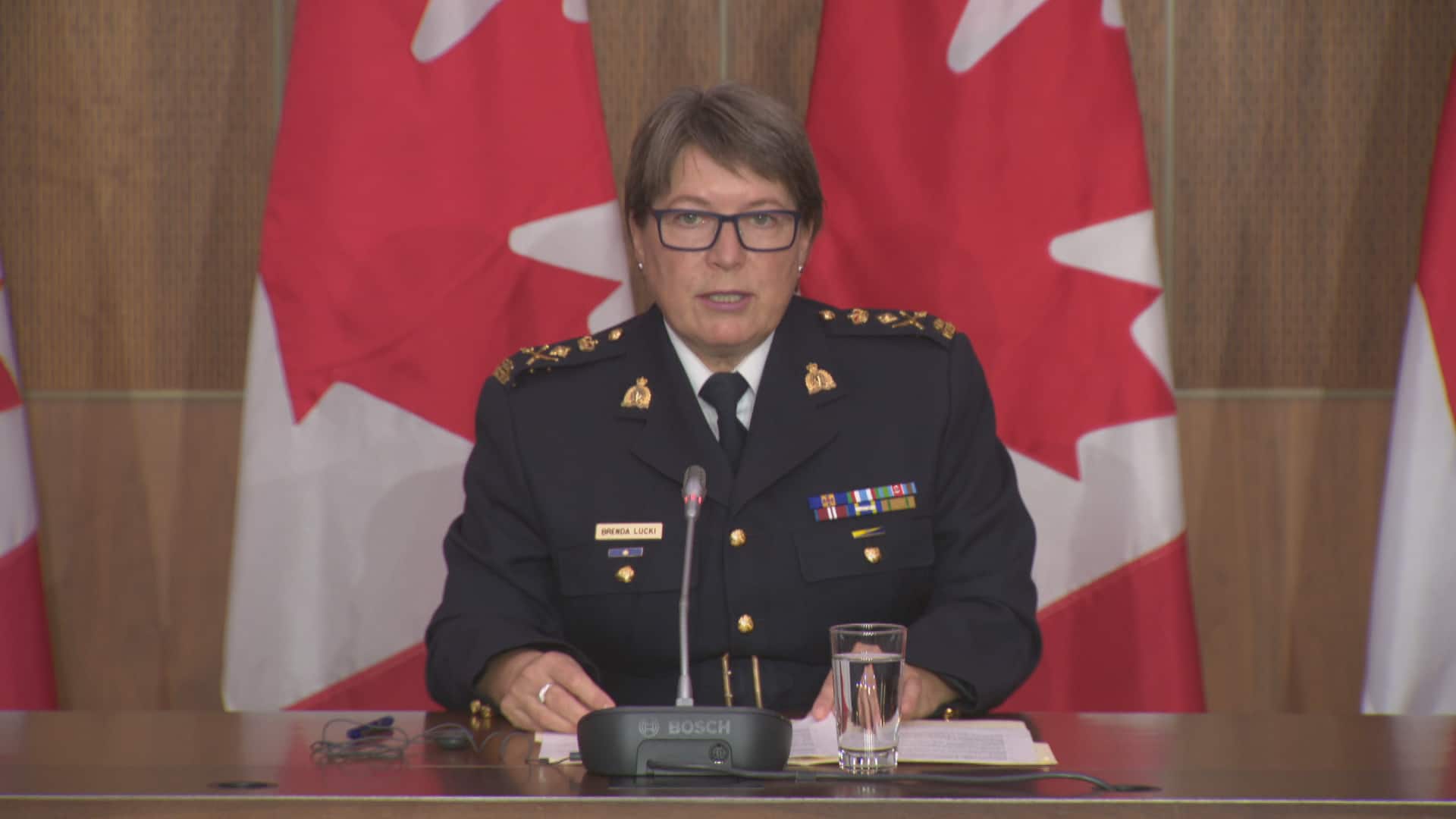 Sack has warned that if there isn't sufficient protection from the police, band members are prepared to defend themselves against further abuse. He said he's received offers from other Indigenous communities to provide security for Mi'kmaw fishermen.

Lucki said the RCMP has already sent in more officers from neighbouring Prince Edward Island and New Brunswick to support the existing contingent of law enforcement officers in southwestern Nova Scotia — where individuals linked to the commercial fishery are alleged to have burned a building to the ground and violently confronted Indigenous people behind an upstart fishing operation.

"The RCMP's increased involvement is necessary as part of the effort to increase peace and order and uphold the law," Lucki said.

"We take every incident seriously. It's very dynamic, very fluid and that assessment changes constantly," she said, when asked if the force is ready to send even more officers to the area as the standoff continues.

"I want to assure the people of Nova Scotia — we are managing this issue. We are as well deeply concerned by the acts of violence and the property damage linked to this dispute."

Sack said Wednesday he wants to see more officers out on the water, where commercial fishermen have been accused of cutting lobster traps to disrupt the catch.

Asked if he was reassured by Lucki's commitment to send more resources to the area, Sack said he won't be happy until someone is brought to justice.

"It's the same old song and dance, right? It's, 'We're working on it, we're investigating it, we'll let you know later' ..." he told reporters.

"But for us, it's not good enough. We feel hate crimes will continue, the threats are out there. Hopefully, charges will be laid."

Asked why RCMP officers stood by as commercial fishermen vandalized an Indigenous lobster pound and torched a vehicle last week — incidents documented on a video circulated on social media — she said the RCMP has since arrested a man in connection with that crime.

"I can assure you when criminal actions occur, the RCMP will investigate," she said.

RCMP arrested Michael Burton Nickerson, 31, of Yarmouth County and on Sunday charged him with arson and damage of property.

After years of legal wrangling, the Sipekne'katik First Nation started fishing outside the federally mandated lobster season last month. The 1999 Marshall decision from the Supreme Court found the Mi'kmaw have a right to a "moderate livelihood" from the fishery, but that term has never been defined in federal law.

Commercial fishermen, who are largely white, have said this sort of fishing could damage the health of lobster stocks, and they're demanding that Fisheries and Oceans Canada (DFO) stop them from catching the prized crustaceans.

The federal government, led by Fisheries Minister Bernadette Jordan, is locked in negotiations with Chief Mike Sack over how to best manage the Indigenous fishery. The Nova Scotia minister has called for calm as those talks continue.

Two lobster facilities in southwest Nova Scotia were targeted and vandalized by commercial fishermen last week. One of the facilities, located in Middle West Pubnico, N.S., was destroyed in a Saturday blaze RCMP have deemed suspicious.

The national police force has a contract to provide policing service in some parts of Nova Scotia, including this largely rural area some 225 kilometres west of Halifax.