The Liberal government is asking the public to weigh in online on what it sees as 10 key national security topics, ranging from threat reduction to terrorist financing, as it moves toward amending the Anti-terrorism Act.

Review deals with problems Liberals have identified with Anti-terror Act 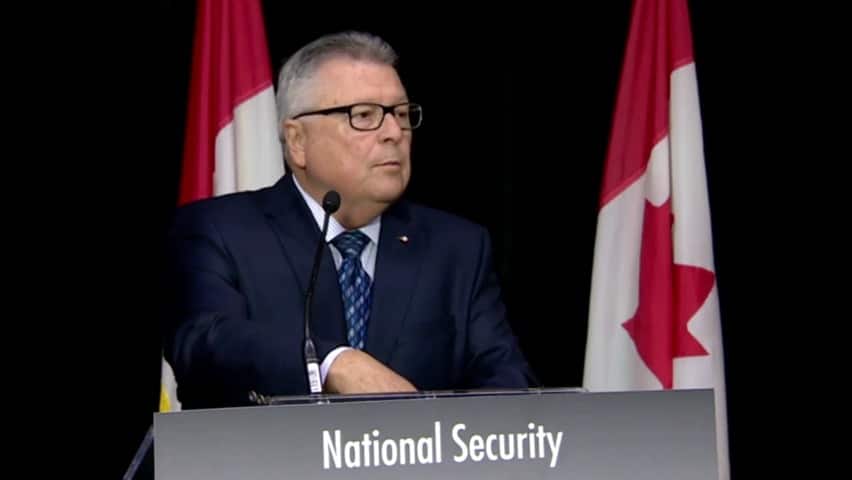 The Liberal government is asking the public to weigh in online on what it sees as 10 key national security topics, ranging from threat reduction to terrorist financing, as it moves toward amending the Anti-terrorism Act.

"We want to hear from Canadians about what needs to be fixed about the previous government's Bill C-51," announced Ralph Goodale, minister of public safety and emergency preparedness at a news conference in Edmonton on Thursday.

​The Liberals' discussion paper outlines the government's main issues and asks the public specific questions on each topic.

The consultation form includes questions such as, "What should the role of the government be in efforts to counter radicalization to violence?" and "In what circumstances, if any, should investigators have the ability to compel individuals or companies to assist with decryption?"

Goodale's department said it's also open to general feedback and people can email in with other topics of concern.

The public safety minister, flanked by Justice Minister Jody Wilson-Raybould, stressed that the government's policy has not been set and the consultations were meant as a conversation starter.

Canadians have from Sept. 8 until Dec. 1 to weigh in online.

Goodale said that because the consultation is online "it's a low-cost endeavour."

Security balanced with rights and freedoms

During the 2015 election campaign, the Liberals promised to repeal what they called the "problematic elements" of Bill C-51, brought in under the previous Conservative government. The Liberals, then with third-party status, did vote to support the controversial anti-terrorism legislation, arguing they could change it if they took power.

Bill C-51, now known as the Anti-terrorism Act, allows Canada's intelligence agencies to share Canadians' personal information more widely with meaningful parliamentary oversight. Authorities can detain someone for up to seven days if it's believed a terrorist event may occur.

The Liberals have checked off some of the promises that had been on that to-do list.

After ISIS sympathizer Aaron Driver was killed by police last month in Strathroy, Ont., Goodale said the government is in the final stages of hiring a senior adviser who will spearhead an anti-terror program to counter radicalization, with a new national office opening sometime in the fall.

Following news that a six-year-old boy had been flagged on Canada's no-fly list, the Liberals announced they've created an office to assist passengers mistakenly barred from flights.

The nine-member committee would consist of seven MPs and two senators who would have the clearance required to explore "any and every dimension of national security that they want to look at," Goodale said at the time.

"Right now, we don't even have a way to meaningfully assess the efficacy and legality of Canada's national security activities. We need serious evidence-based reform, not legislative tweaking," he said in a release.