As the Harper government's bill to scrap the long-gun registry becomes law, a Quebec Superior Court judge has granted an injunction to prevent Ottawa from destroying data contained in the registry. 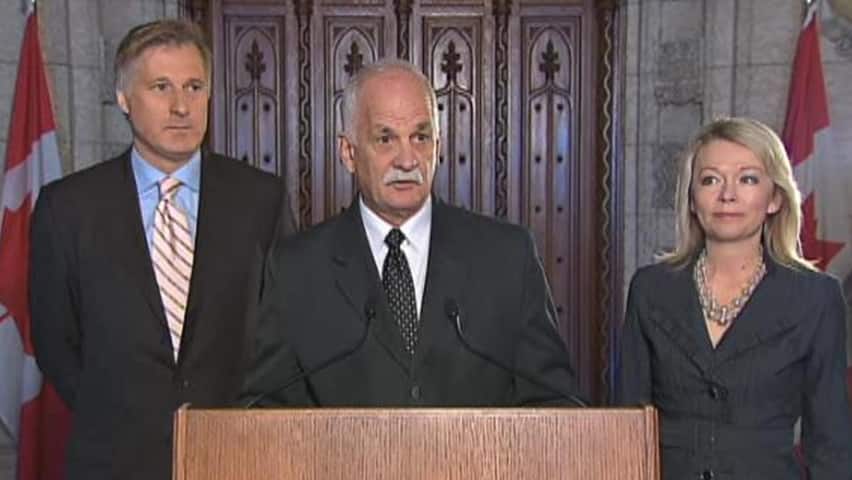 Just as the Harper government's bill to end the long-gun registry becomes law, a Quebec Superior Court judge has granted a five-day injunction against destroying the data about Quebec gun owners found in the registry.

The Quebec government sought the injunction in court in Montreal Thursday, in anticipation of royal assent for C-19, the Harper government's legislation to fulfil a longtime campaign promise to scrap the registry.

The injunction granted Thursday applies to the data collected on residents of the province of Quebec, but also covers the accessibility, availability and integrity of the system holding the registry, as well as the equipment and tools that allow access to the Quebec data. That means the federal government can't take further steps on ending the registry while the injunction is in place. And Quebec can keep adding data to the registry.

"Quebecers are extremely lucky to have a government that cares about public safety, that sincerely cares," said Heidi Rathjen, a former engineering student who survived the 1989 shooting at Montreal's École Polytechnique.

"The battle continues, and hopefully other provinces will see there is a case to be made to fight the federal government," Rathjen told reporters.

Legal arguments will continue on April 12 and 13 on the larger case brought by the Quebec government questioning the constitutionality of the federal government's legislation.

"This is an interim order that is in effect until [5 p.m. ET] on the last day of the hearing of Quebec's application, presently April 13, 2012," Julie Carmichael said in an email.

"This injunction is temporary and doesn’t diminish our commitment to ending the long-gun registry once and for all. We are disappointed to see that, contrary to the will of Canadians and of Parliament, the wasteful and ineffective long-gun registry is still alive."

Bill C-19, the Act to Amend the Criminal Code and the Firearms Act, received royal assent just before 2 p.m. ET Thursday afternoon, after passage at third reading in the Senate Wednesday by a vote of 50-27. The new law takes effect just after midnight.

Its passage into law not only ends the collection of information, enforcement and use of the long-gun registry by law enforcement officials, but begins the process to destroy all the data it contains about registered gun owners across Canada.

"We're really disappointed," Candice Hoeppner, the parliamentary secretary to the minister of public safety told Rosemary Barton on CBC News Network's Power & Politics Thursday. "The impact of it is put on hold until next week."

Hoeppner noted that Quebec is free to set up its own provincial registry, but the federal government does not want to help any other jurisdiction create a registry using the existing data, which she called "flawed," "inaccurate" and "old."

"We're not giving up," Hoeppner added. "We believe in our jurisdiction as a federal government... We're certainly prepared to fight this and go as far as we need to," she said, suggesting a Supreme Court appeal was possible.

Hoeppner accused Quebec of fighting the federal government on this for "political reasons."

Ministers from the Harper government were celebrating the imminent end of the oft-maligned registration system earlier Thursday.

"Many of us have waited for this day for a very long time," Toews told reporters in Ottawa.

Should the gun registry data be saved? Take our survey.

Hoeppner, who has been the public face of the Harper government's efforts to kill the registry, said she was proud to stand with her colleagues to "mark this momentous time when our government's commitment to ... stand up for law-abiding Canadians and end the long-gun registry today is being fulfilled."

Hoeppner noted in reply that two NDP MPs and three Liberal senators had voted in favour and helped pass the bill.

Quebec Justice Minister Jean-Marc Fournier said Tuesday that more than a million long guns would disappear from the radar screens of law enforcement agencies in Quebec if the data is destroyed.

"In 2010, we [seized] 2,500 guns from people who owned those guns, because they were dangerous [to] themselves or other people," Fournier said.

The province believes that it has a right to the data because it helped collect it and claims that its destruction is unconstitutional.

Quebec has long demanded relevant registry information be transferred to the province, so it can create its own list. It says starting a new registry from scratch would be prohibitively expensive.

The federal government argues that a criminal law measure like the long-gun registry does fall under federal jurisdiction.

"The data registry will be destroyed as soon as feasible," Toews told reporters in Ottawa Thursday. When asked to clarify what impact the Quebec court case could have on the timing of the destruction of the data, Toews declined to comment on the court case specifically.

"As soon as the legislation is passed, there is a requirement to destroy the data. If there is no legal impediment to destroying the data, that process continues," Toews said.

The prime minister's office later confirmed that the federal government would respect any injunction from the Quebec Superior Court.

Federal government lawyers at the Quebec Superior Court in Montreal told reporters that because of physical, bureaucratic and logistical reasons, the data in the gun registry cannot be physically destroyed until August.

The legislation allows for a phased implementation, the federal lawyer said in explaining the delay in the actual destruction of the data.