A video posted by the Public Service Commission (PSC) that depicts only white bureaucrats sent the wrong message to minorities and failed to reflect the diversity of the federal public service, Treasury Board President Jean-Yves Duclos said today. 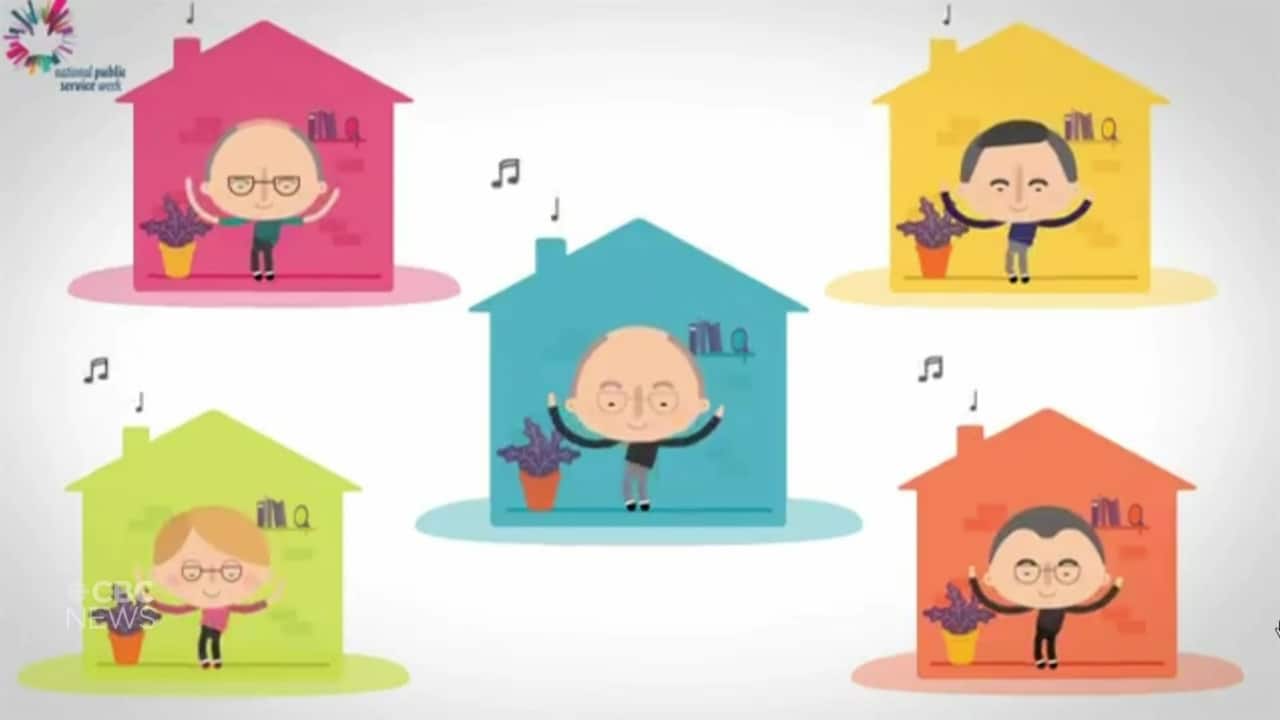 4 months ago
1:08
A video posted by the Public Service Commission (PSC) that depicts only white bureaucrats has been pulled after the agency faced criticism online. 1:08

A video posted by the Public Service Commission (PSC) that depicts only white bureaucrats sent the wrong message to minorities and failed to reflect the diversity of the federal public service, Treasury Board President Jean-Yves Duclos said today.

The PSC, an agency of the federal government that manages "merit-based hiring" and helps develop hiring policies for the larger public service, posted a short video to its social media channels on Friday to mark National Public Service Week, an occasion meant to recognize the contributions of the country's public servants.

The video shows five cartoon-like characters — four of them appear to be older white men — dancing in front of homes. The video thanks public servants for participating in "NPSW 2020."

"Here is a video that will likely give you the urge to get moving!" the post reads.

After getting criticism from some Twitter users, the PSC pulled the video and deleted its post. "We sincerely apologize for the video thanking PSC employees," the commission said in a subsequent post.

"I think it not only sends a wrong message but also a wrong description of what the public service is now and what we want it to be in the future," Duclos told CBC's Power & Politics.

Duclos said he has a "personal mandate" from Prime Minister Justin Trudeau to bolster diversity in the ranks of the public service and make the bureaucracy "a better representation of Canada and what Canadians are."

He said he is determined to make the public service "more inclusive and more effective."

The video was criticized, in part, because PSC is the government agency tasked with ensuring the public service reflects the diverse country it serves, and with "identifying and eliminating barriers in recruitment and staffing" that might place some groups at a disadvantage in hiring.

The video also comes at a time when institutions in North America are grappling with how to do away with systemic racism. Systemic racism refers to entrenched discrimination in certain institutions that puts minorities at a disadvantage.

The Federal Black Employee Caucus (FBEC), a group that represents Black federal public servants, has said its members still face anti-Black racism on the job — even though the public service is required by law to hire a certain number of people from four employment equity designated groups: women, Aboriginal peoples, persons with disabilities and members of visible minorities.

"Like all public servants, we strive to be professional, loyal and hard-working. Each day we go to work to seek solutions to issues that affect all Canadians, despite facing the institutionalized anti-Black racism that is a barrier to our full participation in the federal public service and in our personal lives. We are Black federal employees and we are resilient," the FBEC said in a statement.

Asked Monday who in the PSC approved the post, the commission said its internal communications team drafted the short message and it remains "committed to diversity in all its forms and advocate[s] for inclusive representation at the PSC and in the public service."

"The video depicted avatars representing five members of the PSC's senior management team. These avatars don't illustrate the full diversity of the PSC. We recognize that, without context or explanation, this video meant for PSC employees created an impression at odds with our commitment to diversity and inclusion," a spokesperson for the commission said in a statement to CBC.

Since 2000, there has been a slow but steady increase in the number of Canadians of colour in the federal public service — from just under six per cent of the total then to more than 16 per cent today.

It's so low, in fact, that the Privy Council Office won't release the figure; it argues that releasing it would compromise privacy rights because it would be easy to work out who these senior civil servants are.

The federal government fares far better when it comes to appointing women; the ranks of deputy ministers and other high-level positions are close to gender parity now.