Treasury Board president Tony Clement has announced that the government has reached a deal with its public sector unions to double the amount retired federal employees pay in premiums for health benefits. 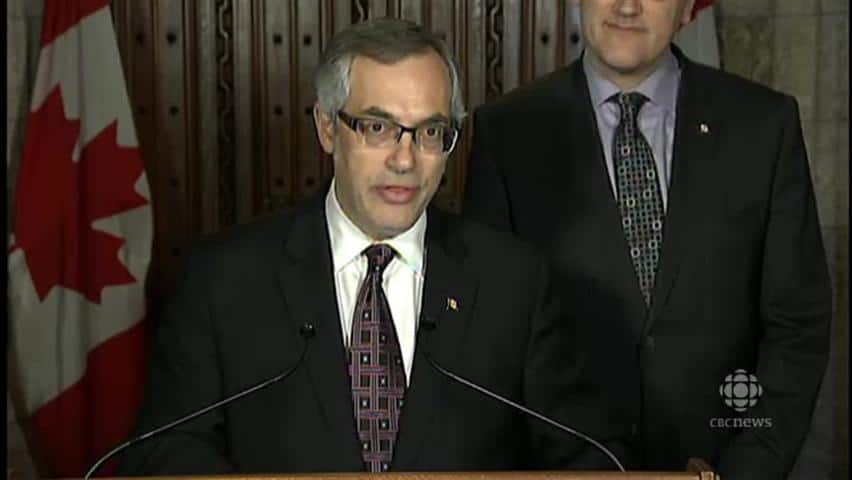 Treasury Board president Tony Clement announced today that the government has reached a deal with its public sector unions to double the amount retired federal employees pay in premiums for health benefits.

Clement made the announcement at a news conference Wednesday.

However, public service union leaders and the group representing retirees argue the deal was not negotiated in good faith, considering the government had outlined its plan in the 2014 budget and threatened to make the changes through legislation.

"The reason we agreed to this deal is to mitigate the harm to our members. We did not agree to this deal as a negotiated deal," said Sylvia Ceacero, the executive director of the National Association of Federal Retirees (FSNA) in an interview with CBC News.

Ceacero said the association has considered challenging the deal in court.

"We had a gun to our head ... so that leaves the potential for some sort of legal action if our organization so feels it could be beneficial to our members."

The Conservative government announced in its Feb. 11, 2014, budget that it would transition from the government currently paying 75 per cent of benefit costs under the Public Service Health Care Plan to equal cost sharing.

"I'm certain that we, in terms of our public communications, we did concentrate the minds just as they did as well. Their position was publicly communicated as well," he said.

"Quite frankly, we both put some water in our wine," but that's something that happens in any negotiation, Clement said.

The new 50-50 cost-sharing plan is expected to save the government significant cash. The savings are estimated to be $6.7 billion over six years.

The deal also changes the eligibility from two years of service to six.

In the budget, the government said the change was to move toward comparable plans of other large employers in the public and private sectors.

The new cost-sharing formula is expected to be phased in over four years beginning April 1, 2015. It will exclude low-income pensioners. Current retirees with incomes that make them eligible for the Guaranteed Income Supplement (GIS) will continue to pay 25 per cent of the premiums.

The FSNA's Ceacero said they had asked that the low-income threshold be $30,000 under which 65 per cent of their members fall. But she said the Treasury Board said no. The GIS threshold is just under $17,000 for a single person and just over $22,000 for a couple.

For retiree Susan Barker, it's not the additional cost, but the fact it affects both current and future retirees that bothers her. Barker worked for 30 years in the public service in Ottawa and now lives in Windsor.

"It's reneging on the deal. It's not an ethical thing to do. I'm angry," Barker said in an interview with CBC News. "We were often told we received a lower salary than the private sector because our benefits were better. Now it's being cut back on us."

The president of the Professional Institute of the Public Service of Canada, which represents some of the retired employees, said she is not telling members it's a good deal.

"It was a success we're able even to convince the government to negotiate," said Debi Daviau in an interview with CBC News.

But the union adds the government did make some concessions.

Starting next year, all health-care plan members (active and retired) will no longer have to pay the annual deductible for health claims, currently set at $100 per family or $60 for a single member.

And three new benefits will be added beginning Oct. 1, 2014:

In his news conference Wednesday, Clement also hinted at more savings to be found in the public service, something the national president of the Public Service Alliance of Canada said does not bode well for upcoming bargaining on new collective agreements.

"None of us thought it would be a walk in the park," said Robyn Benson. "We're all very prepared for a difficult set of negotiations."