Prisoner self-injury on the rise in Canada

Incidents of federal prisoners slashing, burning, banging their heads and choking themselves behind bars have more than tripled in the last five years, according to documents obtained by CBC News. 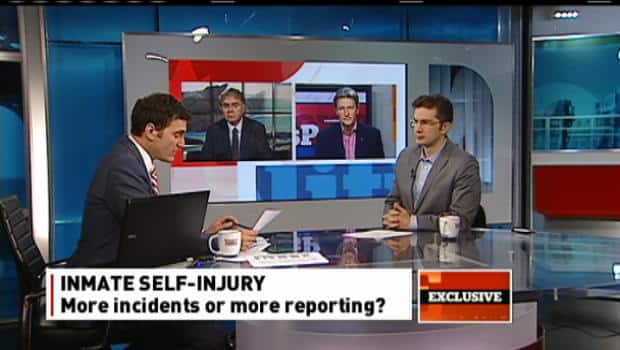 8 years ago
13:28
Figures obtained under Access to Information reveal that incidents of self-inflicted injuries by federal prisoners has more than tripled int he last five years in Canada 13:28

Incidents of federal prisoners slashing, burning, banging their heads and choking themselves behind bars have more than tripled in the last five years.

Figures obtained by CBC News Network's Power & Politics under Access to Information show a dramatic rise in cases of self-inflicted injuries and suicide attempts — and reveals the biggest spikes in regions where overcrowding, violence and gang proliferation are most acute.

And the data released by Correctional Service of Canada reveals another alarming trend in the Prairies — incidents of self-inflicted injury involving aboriginal women have soared from just 8 in 2006 to 214 last year. Numbers include some repeat incidents by the same offender.

Source: Correctional Service of Canada, under Access to Information request

Conservative MP Pierre Poilievre could not explain the spike in numbers, but said many cases are linked to mental illness. He said it was "tragic" whenever any one deliberately harms themselves in or outside of prison.

"It's difficult to say exactly what is behind the numbers, but what we do know is the steps that can be taken in order to help," Poilievre told host Evan Solomon.

New measures include a mandatory psychological assessment of prisoners within 90 days of intake, he said. Improved training protocol also helps correctional officers identify inmates at risk and take steps to remove tools that can be used to inflict self-injury.

Poilievre also said there is no demonstrated link between double-bunking and over-crowding with self-harm and violence behind bars.

But NDP MP Jack Harris called the figures a "terrible indictment" of the Conservative government's approach to fighting crime — and predicted the looming closure of Ontario's Regional Treatment Centre will exacerbate the problem.

"I think this government has really lost it in terms of its obligations, not only to keep the staff safe, to keep the prisoners safe, but also to look at rehabilitation," Harris said.

"These people who are in prison are going to be out. We want safe communities. We want people to have safe access to programs — not be stuck in a situation where their circumstances are such that they're prone to self-inflicted injuries. This is terrible."

Liberal MP John McKay called the spike in self-injury cases the "logical outcome" of the Conservative government's tough-on-crime policies he claims are "inherently racist." Policies such as mandatory minimum sentences hit the most vulnerable people in the prison population hardest, McKay said, including aboriginals, the mentally ill and the illiterate who are already over-represented in the system.

McKay warned that if the Conservative government continues on its path, there will be more crime, violence, suicide and costs with fewer programs and practices that actually lead to public safety.

Julie Carmichael, spokeswoman for Public Safety Minister Vic Toews, said the government takes the issue seriously and is taking many steps to tackle the problem, including increased investments for mental health services and more staff training.

"However, the fact remains that prisons are not the appropriate place to treat those with mental illness," she said. "The NDP want prisoners to access needles that would cause prisoners harm — this is a policy we absolutely do not support."