Premiers meeting in Victoria have announced the creation of a working group dedicated to health innovation. 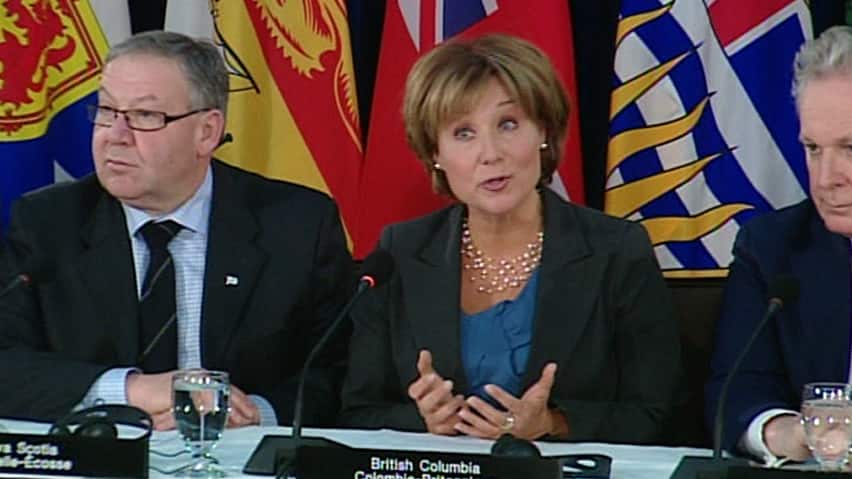 9 years ago
1:42
Canadian premiers are forming a committee to study ways they can improve the health-care system 1:42

Canadian premiers banded together and found common ground at their meeting Tuesday, announcing the formation of a working group on health-care innovation.

Prince Edward Island Premier Robert Ghiz and Saskatchewan Premier Brad Wall will co-chair the group, whose members will include health ministers from the provinces and territories.

British Columbia Premier Christy Clark called the development a "bold" move when she announced it with Wall and Ghiz on the second day of the Council of the Federation meetings in Victoria.

The premiers also agreed that Manitoba Premier Greg Selinger will chair a meeting with finance ministers from across the country so they can figure out a funding formula that leaves no province worse off than it is now, Clark said at the closing news conference. That's a discussion some of the premiers say the federal government has neglected to lead.

The finance ministers' group will look at how newly announced federal funding will affect the provinces and territories, Selinger said.

The provinces expected to sit down with the federal government to talk about a new funding arrangement for after 2014 but were caught off guard last month when Finance Minister Jim Flaherty abruptly announced what the new transfers would look like in the years ahead.

Ottawa will guarantee health-care funding increases of six per cent until the 2016-17 fiscal year. After that, the annual increase will be tied to the nominal GDP, the monetary value of all goods and services produced within the country annually, including inflation. Funding increases of at least three per cent will be guaranteed.

Some of the premiers, including Jean Charest of Quebec, were very vocal about the government's unilateral announcement and have been calling for more dialogue. They haven't given up hope that Prime Minister Stephen Harper will talk to them about funding.

The innovation group will work in consultation with health-care providers and will cover three key areas: scope of practice of health-care workers, human resources and clinical practice guidelines. It will provide its first report at a meeting of premiers and territorial leaders in July in Halifax.

The premiers came to Victoria with differing views on the federal government's funding formula, but they all agreed they can do more to work together to share best practices in health care.

"We run 13 distinct health-care operations now across this country, and certain provinces are doing things better than others," Ghiz told reporters. "We think there's a great opportunity for us to be able to collaborate together, look for best practices and really look for more innovations across our health-care systems."

Clark, Ghiz and Wall were also united in saying that provinces need to stop competing with each other for health human resources. Limiting competition is one way of ensuring sustainability of the system, Clark said.

The working group plans to work in close consultation with frontline health workers and the organizations that represent them.

The Canadian Medical Association and Canadian Nurses Association issued a statement commending the premiers for establishing the working group.

"We are pleased that the Council of the Federation will consult with health-care providers in their health-care innovation working group in order to transform our publicly funded health-care system," the statement said. "We look forward to better understanding the roles and mandate of this initiative."

Wall was one of the premiers trying to gain support for the idea of a health innovation fund that would get cash from the federal government in addition to the health transfer payments.

Harper rejected that idea during an interview Monday with the CBC's Peter Mansbridge, saying the government has already been clear about what it intends to contribute to provincial health-care budgets and doesn't plan to spend more than that.

He said he wanted premiers to put the funding issue aside and concentrate on reforming their health systems.

"We haven't dropped engaging with the federal government on the issue of funding," Wall said.

The premiers said, however, that they don't need the federal government's help on the working group.

"It's about what we are going to do as provinces and territories, with or without the federal government," Wall said. "We think that there will hopefully be increased pressure for them to be a part of this, in terms of health care. It's the number one issue in the country and I can't see why they wouldn't want to be interested in it."