Tom Mulcair's New Democrats start the early days of the prolonged campaign with the advantage according to the polls. Analyst Éric Grenier looks at the latest numbers as the campaign gets underway.

But seat projection averages have the two parties even with 127, and the Liberals trailing

As battle lines are drawn now that the campaign is underway, the New Democrats' slim lead over the Conservatives has widened slightly. And as leaders begin to jet across the country, regional contests are taking shape as well.

The latest numbers from CBC's Poll Tracker give the NDP 33.2 per cent support, for a lead of just more than two points over the Conservatives, who trail in second with 30.9 per cent. The Liberals follow in third with 25.9 per cent, while the Bloc Québécois and Greens each have 4.7 per cent support nationally.

The polls are painting a relatively clear picture of where things stand. Though a few individual polls have shown some striking results, including the first survey conducted after the writs were issued that put the NDP as high as 39 per cent, five of the last six polls have pegged the New Democrats to between 30 and 34 per cent support. The Conservatives have scored between 28 and 33 per cent over the last six polls, while the Liberals have registered between 25 and 26 per cent in five of the last seven.

Considering these surveys were taken in the midst of the summer vacation period, that is a fair degree of consistency between them.

The most recent standout poll giving the NDP a crushing 11-point lead, by Forum Research for the Toronto Star, could be a sign that Tom Mulcair's party is poised to make some major gains — or it could be an indication of how difficult it can be to gather a representative sample of Canadians on a Sunday that also happens to fall on a holiday weekend in much of the country.

But translating the average support levels into seats, the NDP would likely win between 116 and 143 seats if an election were held today. That puts them in a near tie with the Conservatives, who would take between 112 and 148 seats. The average projection from the Poll Tracker shows how close things really are, with both parties pegged at 127 seats.

The Liberals would likely win between 63 and 93 seats, putting a minority government for them — at this stage — out of reach.

The Bloc Québécois could win as many as two seats, and the Greens one.

Movement in Ontario, stability in Quebec

Though the race looks three-headed at the national level, with the main head-to-head match-up being between the NDP and the Conservatives, there are important variations in different parts of the country.

British Columbia appears to be moving strongly over to the NDP, with the party leading in the province in each of the last 16 polls. At about 40 per cent, the NDP's support has been very consistent. The Tories, meanwhile, have scored less than 30 per cent in 12 of the last 15 surveys in B.C. 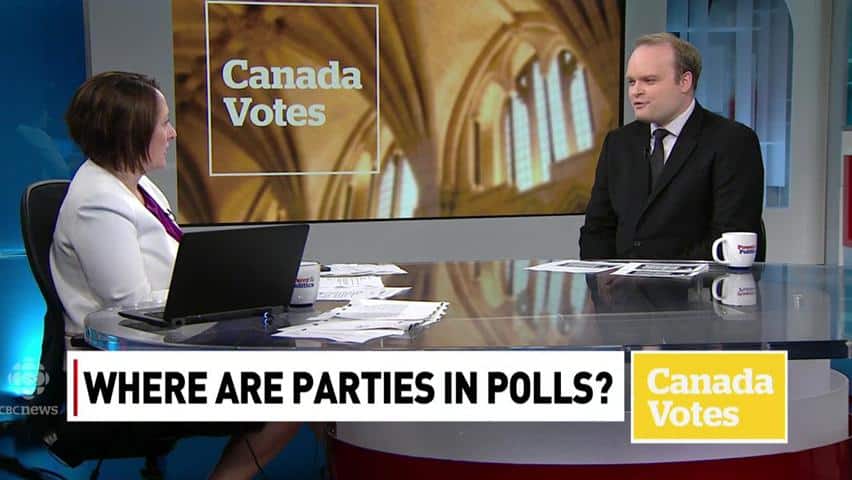 Party support as campaign kicks off

5 years agoVideo
3:39
Poll analyst Eric Grenier discusses where the parties stand in the polls as the campaign begins 3:39

The Conservatives still hold sizeable leads in Alberta and the Prairie provinces, but the New Democrats are showing some sign of life in Manitoba and, particularly, Saskatchewan.

In Ontario, the Tories are also ahead. They appear to have recently experienced an uptick in support, averaging 36 per cent. That is a gain of four points since mid-July. The NDP has surpassed the Liberals in the average, though at 30 per cent to 29 per cent the race remains tight.

That is not the case in Quebec, where the New Democrats have shown very consistent numbers. They have registered 36 to 38 per cent in each of the last nine polls in Quebec. The Liberals, Conservatives, and Bloc Québécois trail at a distance, with the Liberals having the strongest claim on runner-up status.

The only regional lead the Liberals hold is in Atlantic Canada, where they might be in the midst of a small rebound after suffering some poorer recent poll results. But the New Democrats are still in a strong position at 33 per cent, seven points behind the Liberals.

These are, of course, just where the parties stand at the starting gates. The 2011 campaign began with the contours of the race well defined, only for those expectations to be turned on their heads. The same could happen in 2015.

But for now, the election is looking to be a closely contested one from coast to coast.

CBC's Poll Tracker aggregates all publicly released polls, weighing them by sample size, date and the polling firm's accuracy record. Upper and lower ranges are based on how polls have performed in other recent elections. The seat projection model makes individual projections for all ridings in the country, based on regional shifts in support since the 2011 election and taking into account other factors such as incumbency. The projections are subject to the margins of error of the opinion polls included in the model, as well as the unpredictable nature of politics at the riding level. The polls included in the model vary in size, date and method, and have not been individually verified by the CBC. You can read the full methodology here.

The questions asked in the polls mentioned in this article were as follows:

Forum: "If a federal election were held today, which party are you most likely to vote for?"