The federal government is beginning the process of replacing its troubled Phoenix payroll system, the Treasury Board announced Thursday from the Liberals' cabinet retreat in Nanaimo, B.C.

Ottawa still needs to fix Phoenix, despite plan to replace it

The federal government is beginning the process of replacing its troubled Phoenix payroll system, the Treasury Board announced Thursday from Nanaimo, B.C.

The 2018 federal budget included $16 million to fund an exploration phase that's now underway, with government officials talking to companies interested in landing the contract to design a better payroll and human resources system for employees.

"We're moving forward now with an open, transparent procurement process, shaped by user needs of public servants, working in conjunction with the public service unions and vendors," Treasury Board President Scott Brison told reporters on his way into the federal cabinet retreat in Nanaimo on Thursday.

Brison said the government would no longer run a digital procurement process by drafting "250-page" requests for vendors to bid, and receiving back equally long proposals, only to get "a product that wasn't actually what we thought we asked for and it would already be out of date."

Instead, the government is soliciting working prototypes and will try them out in departments and agencies.

"So more show and less tell, and opportunity to actually test working prototypes with public servants," he said.

"One of the failures of the launch of Phoenix under the Conservatives was the lack of end-to-end user testing and the rush to get it done. We are not going to cut corners on time, or lines or resources, and we're going to have the kind of procurement process that defines modern digital projects."

The previous Conservative government made a mistake in treating information technology transformation as "a cost-cutting opportunity," Brison said. "There may be cost savings down the road once fully implemented, but you don't take the savings during the actual digital transformation. That is folly."

The exact value of a future contract is not yet known. It will need to be budgeted once this process is complete — essentially, the government will learn how much it will cost by evaluating and testing the various pitches from vendors.

"We don't want to rush the process. We want to make sure we get it right," Brison said. They won't know realistic timelines for how long this will take until they've spoken to companies interested in designing it.

In the meantime, the Phoenix payroll system — which has underpaid, overpaid or not paid at all thousands of federal public servants — still needs to be fixed.

No resources from that effort are being diverted to pay for this new procurement process. The stabilization of the Phoenix system is being "pursued relentlessly," according to the Treasury Board's press release.

Public Works and Government Services Minister Carla Qualtrough told reporters Thursday that her department has seen "excellent results" in its efforts over the last five to six months to clear the backlog of cases of improperly paid employees.

According to the government's online tracking system, there were still over 300,000 cases of improperly paid employees to be dealt with in late June.

Angry federal civil servants rallied outside the cabinet retreat in Nanaimo, B.C., on Wednesday, venting their frustration at what they see as the government's persistent inability to accurately and promptly pay its employees.

Chris Aylward, national president of the Public Service Alliance of Canada, flew in from Ottawa to join the protest.

"For two and a half years this government has not paid public-sector workers properly. This government seems to have money for everything else, but yet they can't pay their employees on time.

"We have a message for the prime minister and his cabinet: you start showing respect to federal public-sector workers, or you will pay in October of 2019," he said, referencing the fixed date for the next federal election.

"We will make sure that we do to you what we did to the Conservatives in October of 2015."

Phoenix was developed initially under the previous Conservative government, and launched in February 2016. Conservative Leader Andrew Scheer has pushed the blame back at the Liberals, insisting the Trudeau government was in a rush to launch the payroll system despite warnings it was not yet ready. 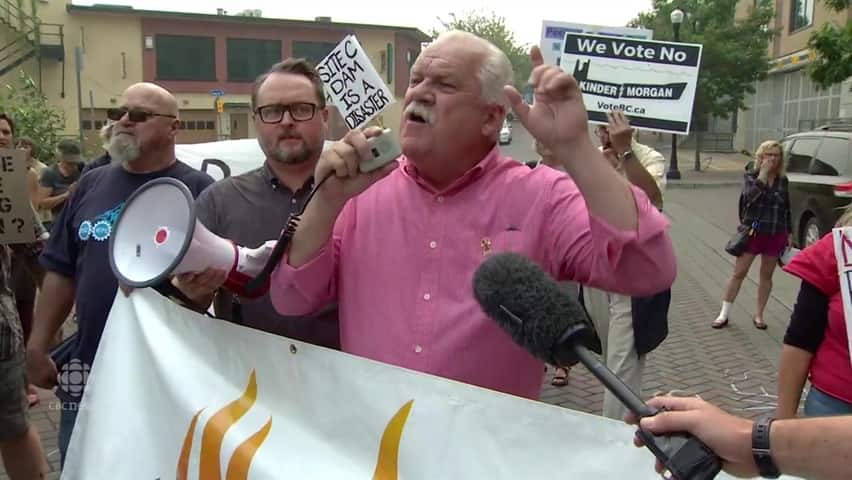