Health Minister Jane Philpott says that provincial guidelines on doctor-assisted dying are "insufficient" and will create a "patchwork approach" as medically assisted dying becomes legal in Canada after midnight tonight.

The Supreme Court of Canada gave the federal government until the end of today to pass new legislation on doctor assisted death, but Bill C-14 — the Liberals' proposed bill on assistance in dying — is still undergoing scrutiny in Parliament.

"While I have faith in Canada's healthcare providers to carry out these responsibilities responsibly and ethically, I believe that regulatory guidance alone is insufficient, given the nature of what you will be asked to do," Philpott said during a speech to a national health conference in Ottawa on Monday.

"We will have a patchwork approach to protection of the vulnerable, as safeguards vary across the country."

The Senate's legal and constitutional affairs committee is hearing from experts today as it continues to study the bill, which could be put to a vote by week's end — at the earliest.

But any major amendments would see Bill C-14 sent back to the House of Commons, further delaying its passage.

Among the witnesses at the Senate committee was Peter Hogg — whose book on constitutional law in Canada is often cited by the Supreme Court — who says C-14 is inconsistent with the top court's landmark ruling, known as the Carter decision, last year. It struck down the ban on assisted dying as a violation of the right to life, liberty and security of the person.

Hogg noted that the Supreme Court specifically said Parliament could respond to its ruling "should they so choose, by enacting legislation consistent with the constitutional parameters set out in these reasons."

"In my opinion, the bill is not consistent with the constitutional parameters set out in the Carter reasons," he said.

The Supreme Court directed that medical assistance in dying should be available to clearly consenting, competent adults with "grievous and irremediable" medical conditions that are causing enduring suffering that they find intolerable.

C-14 takes a more restrictive approach, allowing assisted dying only for consenting adults "in an advanced stage of irreversible decline" from a serious and "incurable" disease, illness or disability and for whom natural death is "reasonably foreseeable." 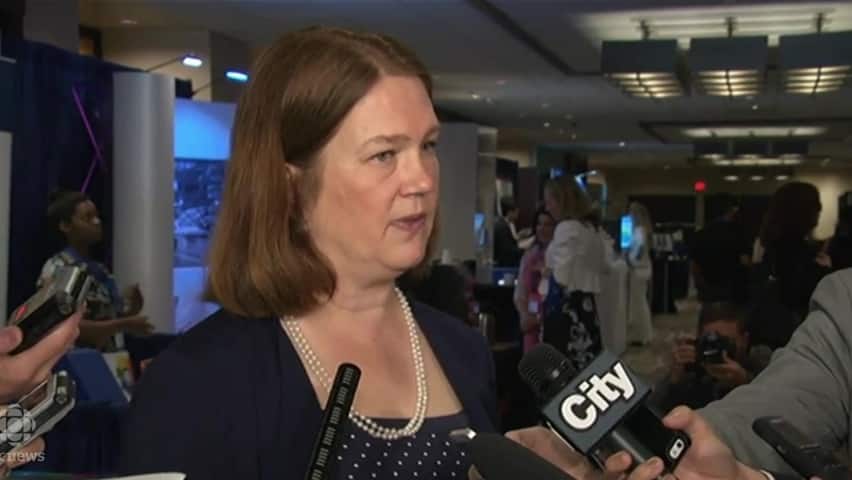 Philpott says there are gaps in assisted dying regulations

4 years agoVideo
3:13
Health Minister Jane Philpott says there is a patchwork and gaps in the guidelines across the country now that the SCOC deadline on assisted dying has been reached. 3:13

If C-14 is enacted in its current form, Hogg said, "the class of entitled persons would no longer include people whose suffering is not an end-of-life condition."

"It is incredible to me that the court in Carter, when it called for legislation by Parliament 'consistent with the constitutional parameters set out in these reasons,' was envisaging legislation that would narrow the class of entitled persons."

Hogg said that Kay Carter herself would not have qualified for physician-assisted death under the regulations proposed in Bill C-14 because she was not considered terminal, and would not have satisfied the condition that her natural death be "reasonably foreseeable."

The New Zealand-born legal expert suggested striking that stipulation, and the requirement that a person be in "an advance state of irreversible decline in capability," would render the government's legislation constitutional.

Justice Minister Jody Wilson-Raybould denied during Senate testimony last week that Carter would not have qualified under the current bill. "Her death had become reasonably foreseeable by virtue of her age and her frailty," she said.

"We have Canada's pre-eminent constitutional scholar, Peter Hogg ... testifying in the Senate to the effect that the government's bill is simply unconstitutional," he said. "This is not just another opinion. He has been cited by the Supreme Court, his text, over 200 times.

"He has come out and so clearly said that this is a bill that is unconstitutional that it is inconsistent with the constitutional parameters in Carter."

Philpott warned Monday of the "gaps" that exist between the different provincial frameworks.

"For instance, safeguards around age are very different across the country. Some of the regulatory recommendations talk about an age of 18 or over and some don't, so there are challenges there.

"There are differences in term of how many witnesses are required. In some cases, it's two witnesses, in others one, and in some of the regulatory guidelines there's no provision for someone to witness the signature of the patient," Philpott told reporters on Monday.

Ontario's health minister, Eric Hoskins, said in a statement Monday morning that the province would ensure drugs needed for medically assisted deaths would be provided at no cost and planned to create a referral service for doctors who are unwilling or unable to provide assistance in dying to send patients to other physicians for assessment.

But the provincial health minister also noted that the absence of a federal law means there is no "national framework" for medically assisted dying and encouraged both patients and doctors to "seek further clarity" by bringing applications to the Superior Court.

Philpott, who is a doctor by profession, said that the responsibility of responding to the Supreme Court has been a "tremendous burden."

She urged doctors, pharmacists and other health care providers to continue voicing their support for Bill C-14.

Philpott said the Trudeau government was "optimistic" the Senate would complete its work "thoroughly and swiftly."