Three mothers who lost their children to impaired drivers were invited to sit in the House of Commons gallery as Justice Minister Peter MacKay introduced new legislation Tuesday to stiffen penalties for drunk driving. 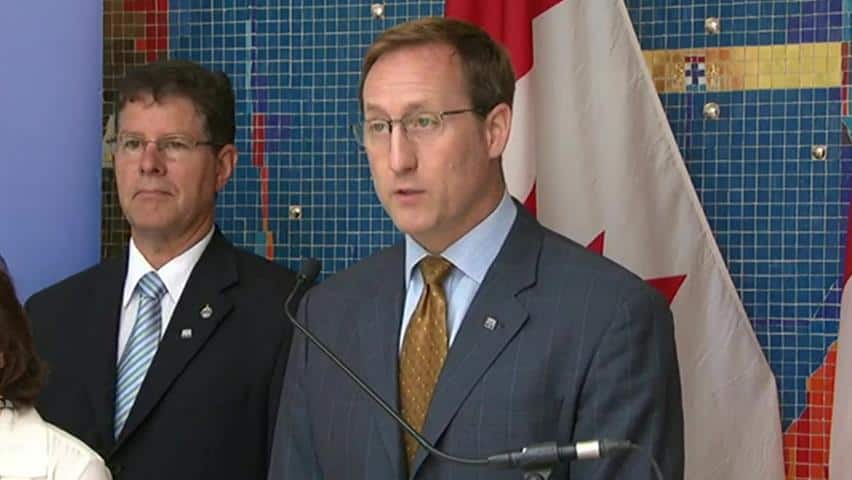 RAW: Peter Mackay says future Parliaments will have to pass his bill

6 years agoVideo
3:45
Justice Minister Peter MacKay introduced new legislation that would increase penalties for drunk drivers. When asked why when it has no chance of getting passed before the election, he said it will be for future governments to pass it. 3:45

Three mothers who lost their children to impaired drivers were invited to sit in the House of Commons gallery as Justice Minister Peter MacKay introduced new legislation Tuesday to create tougher penalties for drunk drivers who kill people.

The three women — Markita Kaulius, Sheri Arsenault and Grace Pesa — were behind a "Families for Justice" petition that gathered more than 90,000 signatures.

The petition called for a five-year minimum mandatory sentence for anyone convicted of impaired driving causing death.

MacKay's new bill changes the mandatory minimum sentence from a $1,000 fine to six years in prison. Speaking to reporters, MacKay thanked the women and other anti-impaired driving groups for their advocacy.

"The stories of victims and the personal accounts from their families clearly illustrated the need for more action," MacKay told reporters.

Drunk driving remains the number one criminal cause of death in Canada, MacKay said, citing several statistics on the persistence of impaired driving and his government's efforts to date on the file.

The bill would crack down and send "a strong message to Canadians that they don't tolerate this criminal behaviour and the risk to public safety," he said.

The bill limits several technical defences that contribute to the backlog of impaired driving cases in the court system. The bill would restructure the Criminal Code to:

The bill also harmonizes and strengthens penalties for all transportation-related offences so that penalties increase for repeat offenders.

In addition to the new mandatory minimums, the maximum penalties for offences not causing bodily harm would double from five years to ten years for an indictable offence, and from 18 months to two years for a summary conviction.

The current maximum sentence for impaired driving causing death is life in prison.

The pair, along with colleague Randy Hoback, had lobbied their government and introduced their own legislative initiatives to stiffen penalties prior to the introduction of the government bill.

"To say this bill has been a long time in the making is an understatement," MacKay said.

Legislation passing will have to wait

With the session set to end next week, the new legislation will not pass before Parliament rises for the summer.

MacKay called it a marker for future governments to consider after the next federal election, expected to be called this fall.

The bill took a "tremendous" amount of drafting, he said, and bringing it forward now is better than the alternative.

"Could we and should have done it sooner? Probably," he admitted to reporters, emphasizing that this part of the Criminal Code must be modernized.

Down the road, the minister said, the federal government would also consult widely on new penalties for drivers found impaired by drug use.

Sheri Arsenault of Beaumont, Alta., was among those invited to be in the Commons Tuesday. She lost her 18-year-old son, Bradley, in a horrific crash in November 2011. Two of his friends were also killed in the collision.

Jonathan Pratt was convicted of three counts of manslaughter and impaired driving causing death. He was given an eight-year sentence and a lifetime driving prohibition.

Arsenault met with MacKay in the past to advocate for stiffer penalties.

"You know, it's time that this is recognized as a serious crime and alcohol cannot become the excuse," she said. 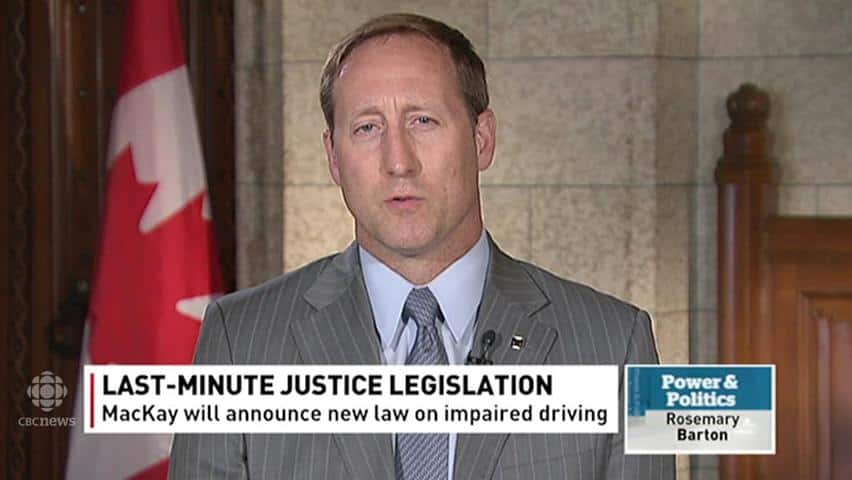