Former Conservative cabinet minister Peter MacKay formally launched his bid to replace Andrew Scheer on Saturday in his home province of Nova Scotia, where he first began his political career more than 20 years ago.

'We've all lived through the realities of what can happen when Conservatives are not united,' MacKay said

Former Conservative cabinet minister Peter MacKay formally launched his bid to replace Andrew Scheer on Saturday in his home province of Nova Scotia, where he first began his political career more than 20 years ago.

MacKay made the announcement in his former riding of Central Nova at the province's Museum of Industry.

"Over four years ago I stood in this very room with family and friends, including Prime Minister Harper and many of you who are here again today, and announced that I would be leaving politics," MacKay told supporters. "It was a tough decision."

MacKay also called attention to divisions within the Conservative Party and referenced his role in establishing the party in 2003, when he merged the Progressive Conservatives with Stephen Harper's Canadian Alliance.

"We've all lived through the realities of what can happen when Conservatives are not united. We know firsthand how important it is that we do our part not to divide ourselves, our party or our nation," MacKay said.

"If divided, we falter, we fail. And I've done my part and I've played my part in uniting the Conservative family into one big blue tent."

Mackay revealed his intention to enter the leadership race Jan. 15 with a four-word tweet, putting to rest months of rumours about whether he would run for the party's top job.

MacKay — who served in three cabinet roles under Harper before leaving politics in 2015 — reflected on his political career in his speech.

"Some of the proudest moments of my life are seeing what Canadians have accomplished both at home and abroad," he said. "As Minister of National Defence I was deeply honoured to do my part in supporting the men and women in uniform."

He also explained how his time as Justice Minister was shaped by his earlier work as a crown prosecutor. 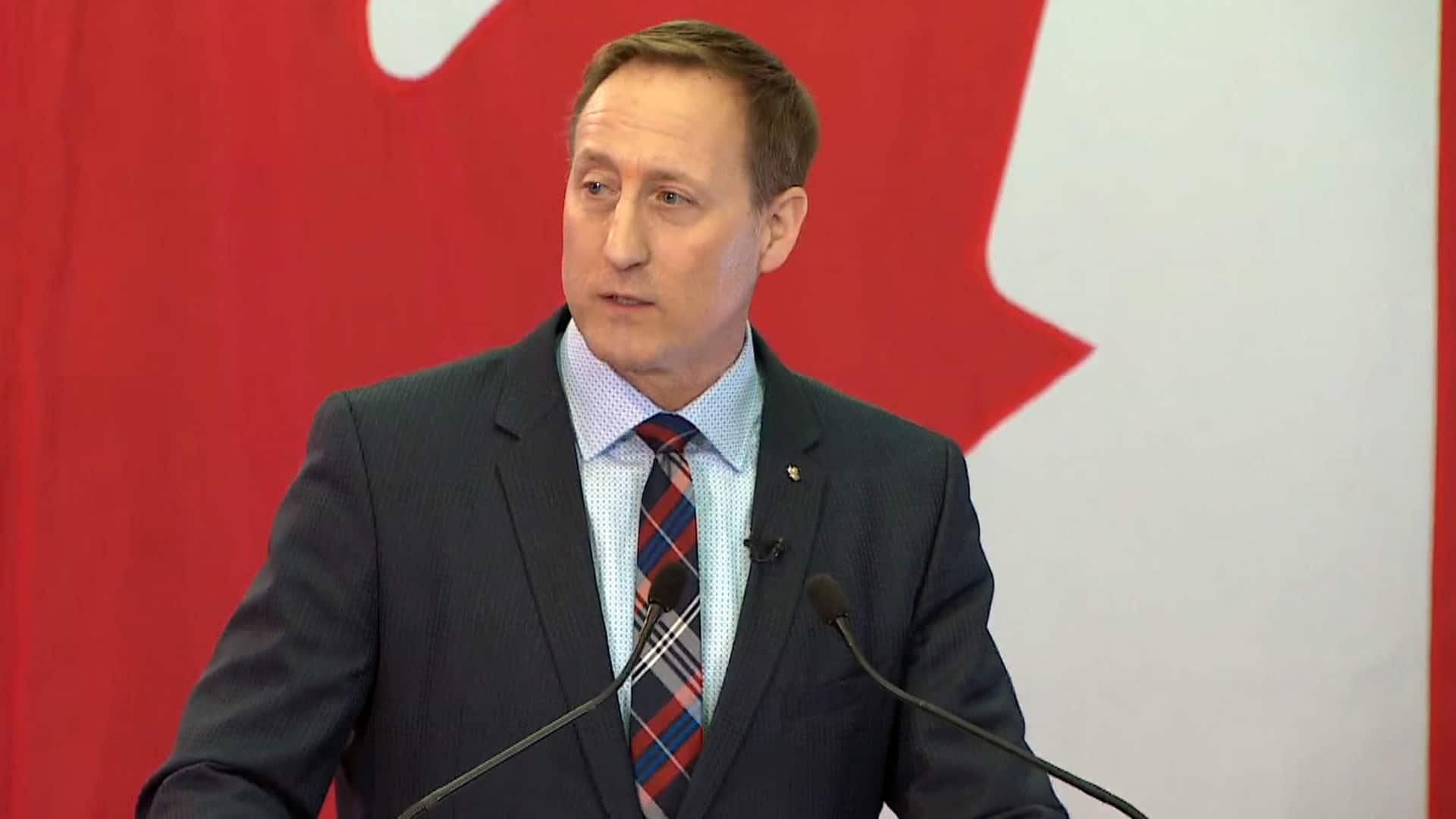 Peter MacKay talks about earning the trust of Canadians

MacKay made no mention of climate change in his speech, though he said Canadians are "stewards of the environment" and that the "country and our planet face big challenges."

He closed his speech with a reference to Canada's LGBTQ community.

"I stand here before you today with my heart on my sleeve, for every Canadian, whoever you love, wherever you live," MacKay said just before leaving the stage.

On Tuesday, MacKay was one of many Conservative MPs who criticized prospective leadership candidate Richard Décarie after the former Harper adviser called being gay a "choice" on CTV's Power Play. 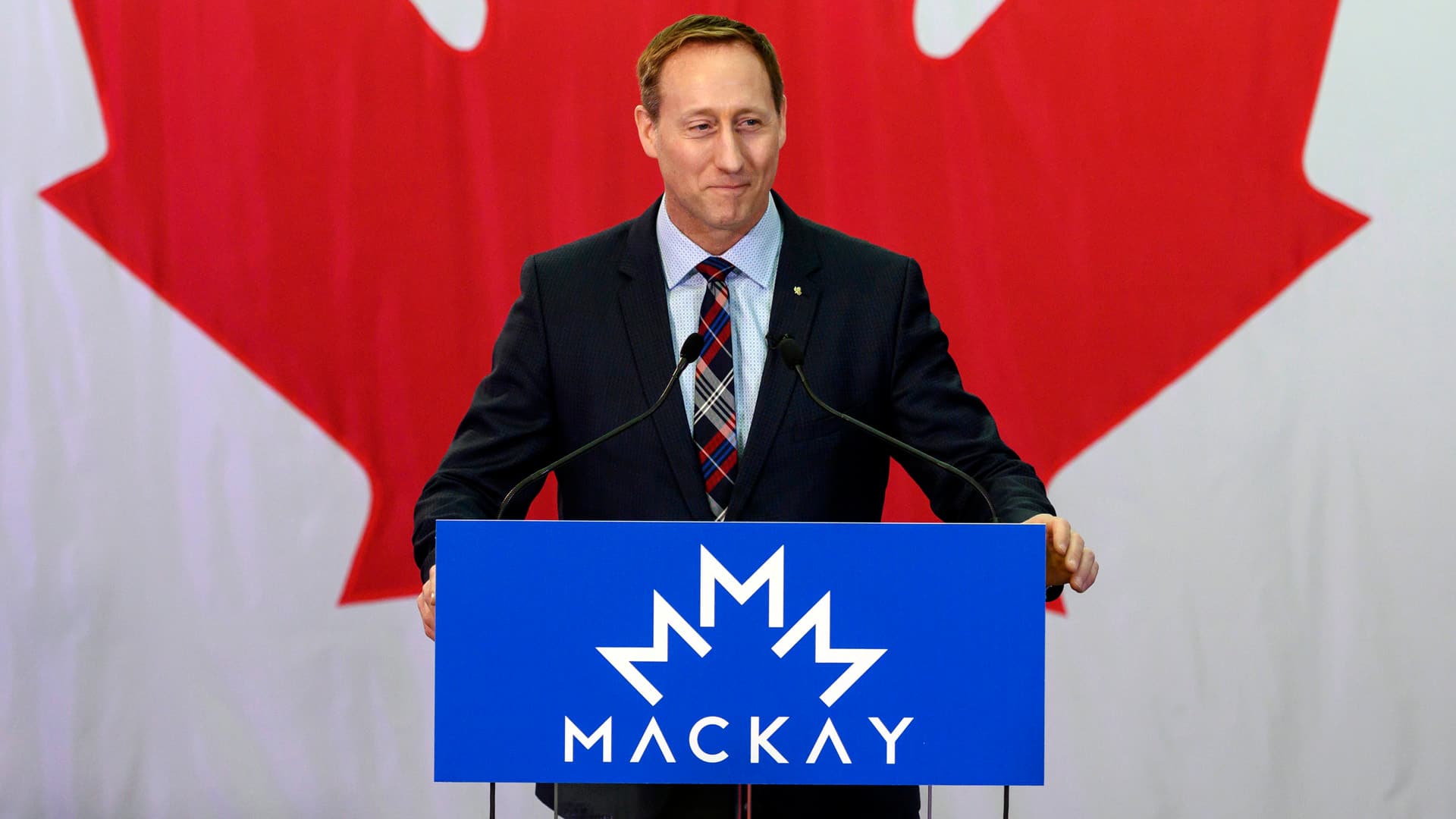 Mackay's launch comes on the heels of several significant leadership drop-outs, including Conservative MP Pierre Poilievre, who abruptly exited the race on Thursday, saying he was committed to spending more time with his family.

Former interim Conservative leader Rona Ambrose revealed the day before Poilievre's exit that she had made the difficult decision to remain focused on her private sector work.

Former Quebec premier Jean Charest also pulled out of the race earlier in the week.

The evolving list of leadership hopefuls positions MacKay as one of the most well-known contenders.

Before Saturday's announcement, MacKay had already garnered support from a bevy of current and former Conservative MPs and prominent provincial politicians.

He told CBC News he hopes to run in Central Nova again if possible.

His father Elmer MacKay, who previously held the riding for much of the 70s and 80s, said his son's recent absence from political life made him a stronger candidate.

"I told him that he had to do the very best he could for as many people as he could and I think he's going to do just that," he said. "I think he did the right thing by taking a break and assessing things from the point of view from someone who wasn't in Parliament. Now he can come back with a renewed sense of purpose."

MacKay, MP Marilyn Gladu and MP Erin O'Toole are the most prominent Conservatives to announce leadership runs so far.

O'Toole posted a concisely worded announcement tweet of his own Saturday and is expected to formally mount his second bid for party leadership Monday.

With files from the CBC's Elizabeth McMillan