Portrait of PM Paul Martin who ruled from the cheap seats: Neil Macdonald

As the portrait of former prime minister Paul Martin goes up on Parliament Hill, Neil Macdonald recalls a politician who was decent and honest and worked harder than just about everybody else.

A political eternity ago, after delivering one of his pitiless budgets, Paul Martin headed out to sell the plan across the country.

He flew commercial, in the cheap seats. He was finance minister, and slashing government, and reasoned that if he was going to preach austerity, he should demonstrate some.

I sat across the aisle from him on a westbound flight out of Ottawa.

Up front, in business class, a clutch of backbenchers were yukking it up on the way back to their ridings, sipping the pre-takeoff bubbly.

Some of them were MPs from the Reform Party, which had thundered into Ottawa a few years earlier, denouncing, among other things, business class travel for public servants and MPs.

Remember, the fellow across the aisle from me in economy was not just the most powerful minister in cabinet, he was also the owner of Canada Steamship Lines, and probably able to afford his own airplane if he wanted one.

So I jerked my thumb at all the fun going on up in business class and asked him if he didn't see something weird in the whole picture.

He just shrugged, and put on that rueful grin of his, and went back to the pile of business on his lap.

Rueful. That was always his look. Almost apologetic, somehow.

He wore it again yesterday as one speaker after another praised him to the skies on Parliament Hill, where his official prime ministerial portrait, a totem of legacy if ever there was one, was officially unveiled.

The unveiling was largely ignored, as such echoes from the past often are. But a few words about that legacy: Paul Martin was decent and honest and he worked harder than just about everybody else.

He certainly didn't need the job, or the migraines that come with it. He was one of those politicians whose ambition was fuelled by noblesse oblige, rather than naked self-interest.

I've known politicians like him in every political party — every journalist has, and we probably should climb down from our cynical perches and acknowledge them more often.

Unlike most other important people, Martin never needed every conversation to be about him; he in fact usually made it about the person he was talking to.

Intelligent argument lit him up and he surrounded himself with eccentric wonks who generally gave reporters straight answers.

Minestrone and his message

They in fact dispensed early with the strange rule of budget secrecy; by the time Martin delivered one, his people had ensured the main points had already been absorbed by the public.

A lunch invitation from Martin when he was finance minister meant 45 minutes and a bowl of minestrone soup in his office, while he evangelized about the public accounts.

His message was that he had to cut government in order to save government, that shrinking the debt would divert taxpayers' money from interest payments to funding proper governance.

He cut every department in Ottawa (except one, and more about that in a moment).

But he went about it, well, ruefully. The political left despised him for what he was doing, including a fair number of his fellow Liberals, and he felt it.

He once actually apologized to me for making the deepest cuts in the CBC's history, then went on to explain, as though some explanation was required, that the alternative was closing hospital beds.

And then it all worked.

Martin began running surpluses for the first time in a quarter century. Five consecutive surpluses, which shrank the debt and, yes, allowed restoration of program spending.

Yesterday, he was referred to as the greatest finance minister in our history.

There was one department he refused to cut, though: Indian and Northern Affairs. Indigenous people, to whom so many Canadians remain indifferent, were always Martin's great matter.

"The depth of feeling he has on aboriginal issues is almost impossible to understand," says Elly Alboim, an Ottawa strategist and Martin confidant since the days at Finance. "It's just ingrained."

Martin has worked constantly for Indigenous rights in the 10 years since he retired, and he went quickly to that subject in his speech at the ceremony yesterday, declaring that "when we look at Indigenous Canada, we are blighted by our blind spots."

Martin didn't really accomplish a great deal during his two years as a prime minister leading a minority government. He was mocked for indecisiveness and then lost to Stephen Harper.

I ran across him by chance during the final week of the campaign in 2006. I hadn't seen him for years.

By then, reporters covering the race were announcing he was having a bad day even before the day began.

Emerging from yet another speech to yet another crowd of sagging Liberals, he looked … rueful. A man who'd known such successes, staring at public failure.

"At that point, we thought we were headed for 50 or 60  seats, and some of us were just trying to arrange a dignified exit," says Alboim. "But he wouldn't stop. That we managed 104 seats was a tribute to his willingness to keep going."

Last night, at the after-party following his portrait unveiling, in a hall filled by hundreds of chirpy young Liberals who were still in high school when he left office, Martin posed for pictures off to the side, smiling dutifully.

I asked him what it was like to have his portrait hanging in that famous corridor between the Hall of Honour and the House of Commons.

Well. I suppose he already has. 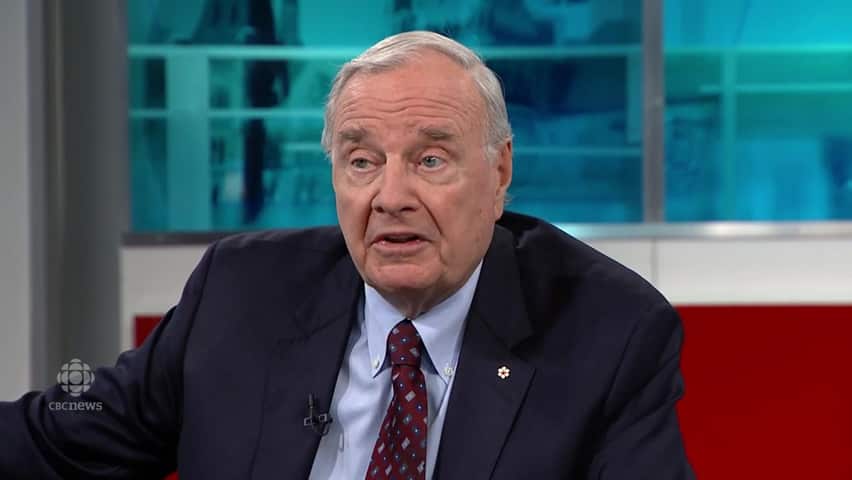 Paul Martin asks the 'what if' question

5 years agoVideo
0:57
What if Harper hadn't canceled the Kelowna Accord? Indigenous children would have had a much different experience over the last 10 years, Martin says. 0:57