Conservative MP Paul Calandra choked back tears as he apologized Friday for his non-answers to NDP Leader Tom Mulcair in the House this week. But CBC News has learned Calandra was put up to the responses by a senior staffer in the Prime Minister's Office. 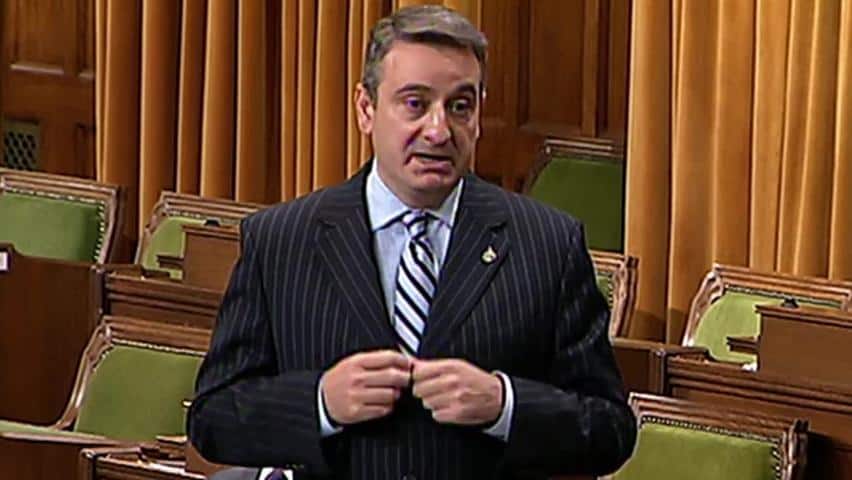 Conservative MP Paul Calandra choked back tears while apologizing Friday for responding to NDP Leader Tom Mulcair's questions on Canada's mission in Iraq this week with an attack on the NDP position on Israel.

But CBC News has learned that Calandra was put up to the responses by a senior staffer in the Prime Minister's Office. Several Conservative MPs also told CBC they were furious as they listened to Calandra's answers in the House.

A teary Calandra rose after question period Friday to "unconditionally, unreservedly apologize to the House" for his glib non-answers earlier this week.

"Clearly, I allowed the passion and anger at something I read to get in the way of appropriately answering the question to leader of the Opposition," Calandra told the mostly empty Commons chamber.

"For that, I apologize to you and to this entire House, and to my constituents," he said.

He also went out of his way to exonerate the so-called "kids in short pants" — the catch-all derogatory term opposition members use to refer to senior political staff, particularly within the Prime Minister's Office — for his actions.

"I take full responsibility, and I apologize to the leader of the Opposition, and to all of my colleagues."

But sources tell CBC News that Calandra was handed material by Alykhan Velshi, director of issues management in the PMO, during the Conservatives' daily preparation for question period and was told to use it in his answer no matter what question was asked in the House.

Many Conservative MPs were upset when they heard Calandra give his answers in the House. At least one wrote an angry email to the PMO saying it was wrong and had to stop.

In an exclusive interview with CBC Radio's The House airing Saturday, a penitent Calandra again took the blame and repeated his assertion that the answers were his. Asked by host Evan Solomon about Velshi's role in the answers, Calandra denied that version of events and said he wasn't given anything to say.

In his apology Friday, Calandra, who serves as Prime Minister Stephen Harper's parliamentary secretary, did not promise that it won't happen again.

"I'm fairly certain there will be other opportunities in this House where I will be answering questions that you don't appreciate," he said. "I don't think this will be the last time that I get up and answer a question that doesn't effectively respond."

But in The House interview, Calandra told Solomon he didn't mean his words to come out that way, and he would clarify his remarks in the Commons.

Calandra's non-sequitur replies sparked sharp criticism from across the media and political spectrum. His conduct was roundly rebuked by CBC's At Issue panel on Thursday night.‎

On Friday, the Globe and Mail published an editorial lamenting the lack of respect for Parliament both Calandra's comments, and the approving response from his Conservative colleagues, had revealed.

"To call Mr. Calandra a clown is to do a disservice to the ancient profession of painted-face buffoonery," the Globe editorial writer wrote.

Meanwhile, Calandra's unapologetic appearance on CBC News Network's Power & Politics on the day he made his initial remarks became an international viral sensation due to the remarkable response it elicited from NDP MP Paul Dewar, whose "face palm" was quickly immortalized in clip and animated gif format.

Shortly after Calandra expressed his regrets in the House, Dewar made a point of acknowledging the apology before returning to regular parliamentary business.

Outside the House, Mulcair told CBC News he accepted Calandra's apology, and noted his party intends to put forward an opposition day motion on Monday that would change House rules to explicitly authorize the Speaker to crack down on irrelevant or repetitive answers.

"I hope that Mr. Calandra and all his colleagues will be voting for the NDP motion to allow the Speaker to do that," he said.

If passed, that motion would take effect immediately.