NDP MP Pat Martin had a somewhat uncomfortable explanation for a brief absence from his seat in the House of Commons on Thursday morning. 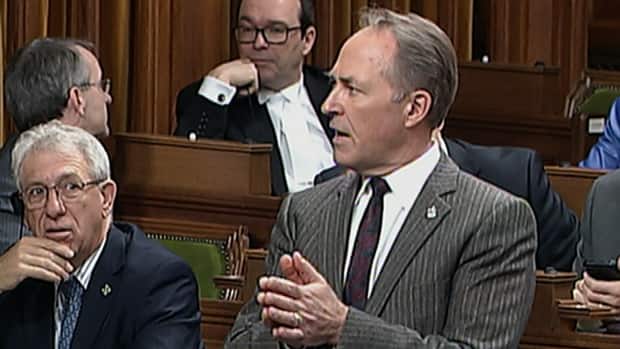 6 years ago
2:32
How tight skivvies nearly cost him a procedural vote 2:32

NDP MP Pat Martin had a somewhat uncomfortable explanation for a brief absence from his seat in the House of Commons on Thursday morning.

The Winnipeg Centre representative voted on a procedural motion to adjourn debate, then left his seat for a moment.

When Conservative MP Royal Galipeau asked deputy speaker Joe Comartin if a vote still counts if an MP leaves while it's being counted, Martin stood up to offer his explanation.

"I can blame it on a sale that was down at the Hudson's Bay [Company] – they had men's underwear on for half price. I bought a bunch that was clearly too small for me and I find it difficult to sit for any length of time," he said.

"I apologize if it was necessary for me to leave my seat briefly, but I did not mean to forfeit my right to vote."

After a mix of cheers, applause and laughter from the benches, Comartin was forced to rule on whether Martin's vote would count.

"Let me try to deal with this with at least some seriousness, we all understand that we have to be in our seats at the time the motion is read ... the member for Winnipeg Centre was in his seat at that time. He did step out of his chair for a very short time and was directed by me to sit down again," Comartin said.

"I didn't understand the explanation at the time, that he subsequently gave … can't say I really understand it at this point."

Comartin then said that since Martin was in his seat when the vote was read and also when he voted that his vote was able to stand.

Later, on CBC News Network's Power & Politics, Martin allowed that tight briefs were only part of the story.

"Some Conservative MP got his knickers in a knot, I think, about the fact that I stepped away from my chair for a couple of seconds, and so, you know, I believe that his point of order was tongue in cheek and it warranted a cheeky response," Martin told host Evan Solomon, while admitting that a sale of 50 per cent off is like "catnip to a Winnipegger."

"But ... that's not why I left my seat in the House of Commons, I left to go and have a chat with the Speaker and I think Mr. Galipeau overreacted heavily by saying I should forfeit my vote for having the temerity to ask the Speaker a question during a vote," Martin said.

"It was a cheeky answer to what I thought was a cheeky question," Marin said. "But it begs the question, I mean, a lot of the grumpiness in the House of Commons might be traced to the fact that MPs are buying one size too small in their knickers."

Martin said that in the end, at least his vote was allowed to stand.

"Let's face it, I was caught with my pants down for stepping away from my seat briefly," Martin said.

<a href="https://twitter.com/RosieBarton">@RosieBarton</a> so tired of wedgie politics.