Britain’s Iron Lady once said she loved argument and debate. But even Margaret Thatcher would find the clash of views now underway in Canada over the number and manner of the leaders’ debates a little bizarre.

Britain's Iron Lady once said she loved argument and debate. But even Margaret Thatcher would find the clash of views now underway in Canada over the number and manner of the leaders' debates a little bizarre.

If the Conservatives get their way, there will be five. The party will decide which of the 20 or so proposals put forward by potential hosts will be accepted heading into the 2015 campaign.

And, as unlikely as this may seem, the NDP is shaping up as the Conservatives' ally in re-framing how and with whom the debates will be held. The reason? Both parties are determined to marginalize Liberal Leader Justin Trudeau.

The only real debate now is whether they'll succeed.

The Conservatives have already confirmed that Stephen Harper will take part in four debates. They will accept one — and only one — more proposal, but not the one put forward by the consortium of Canada's major broadcasters, including the CBC and Radio-Canada. The consortium on Thursday proposed two debates, one in French and the other in English.

"We said we were were going to do five,'' Conservative spokesman Kory Teneycke said Thursday on CBC News Network's Power &  Politics. "We are going to pick the five that we think are the best five... and the consortium didn't make the cut.''

New Democrats have agreed in principle to the same four debates as the Conservatives. But party leader Tom Mulcair is willing to participate in others, including one that will focus on women's issues, as well as the two debates being proposed by the major broadcasters, provided questions of timing, format and moderators can be worked out.

"Our priority is to have Tom Mulcair debate Stephen Harper as often as possible, whenever and wherever possible,'' said  NDP spokesman George Soule. "We want as many Canadians as possible to see him present the NDP's plans.''

That leaves the Liberals, who have yet to commit to any proposals, and yet to rule any out. But the party did set out a list of requirements this week, including at least one town hall format that involves the audience. The party also believes there should be an equal number of debates in French and English.

It's a big game of chicken, with Teneycke accusing the Liberals of being scared that their leader can't handle so many debates.

Trudeau is, of course, the least experienced of the three main leaders. The Conservatives want to exploit that apparent advantage, in part by agreeing to debates focussed exclusively on the economy and another on foreign policy issues, topics they believe will highlight Harper's strengths after nearly a decade in office, and his record in guiding Canada through both a global recession and an increased threat of terrorism at home and abroad.

But there's another concern, shared by both the Harper and Mulcair camps.

Neither wants Trudeau to be seen as "winning" a debate by simply surviving it. That's the underlying rationale for demanding more than the two debates that were held in the 2011 campaign, and why both parties want debates that focus on specific issues.

Both camps are also looking for that "gotcha moment," the kind of campaign-defining exchange that former NDP leader Jack Layton used against then-Liberal leader Michael Ignatieff four years ago when he raised Ignatieff's attendance record in the Commons.

"Most Canadians, if they don't show up for work, they don't get a promotion,'' Layton said, a barb that was repeated over and over again on social media in the days that followed.

But with risk, comes upside for the Liberals. Trudeau's relative inexperience means lower expectations. He's seen as more likeable than his opponents. He represents generational change. His campaign can benefit if he just does better than anyone thinks he will.

It's why the party wants a live audience, and a chance for voters to ask the leaders direct questions.

So, what should voters expect as this debate over debates continues to rage.

Will the French and English events proposed by the broadcast consortium go ahead with Stephen Harper represented by an empty chair? 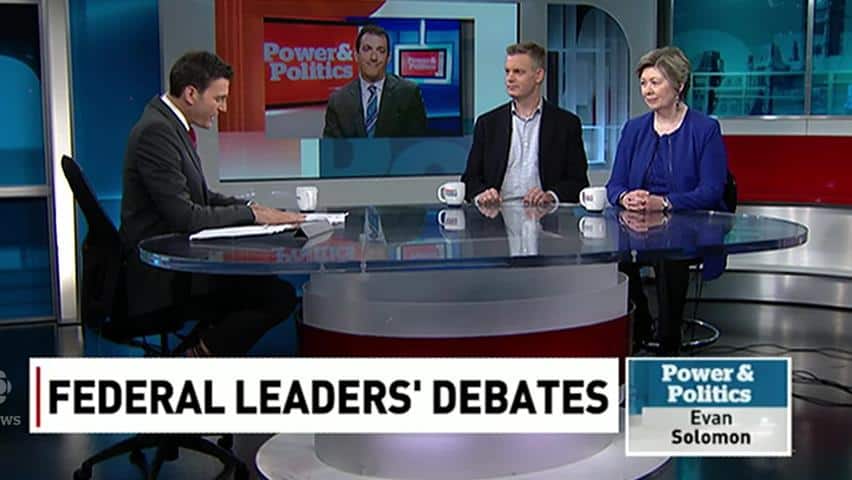 Can the Liberals afford to stay away from the four debates the Conservatives have agreed to: the one on economic issues sponsored by the Globe and Mail and Google Canada, one on foreign policy sponsored by the Munk Debates, a French-language debate sponsored by TVA and a pre-election debate proposed by Maclean's/Rogers?

Will Tom Mulcair agree to a debate that includes Trudeau, but not Harper?

There's time for compromise, but in this current game of chicken it's hard to see where it can be found.

For Harper's Conservatives, there's even some comfort to draw from the U.K., where David Cameron said he would agree to just one televised debate involving the other party leaders…  a position for which he was roundly criticized in the mainstream media.

Cameron didn't budge. He skipped a televised debate, leaving the field wide open to his opponents.

And his Conservatives went on to win a majority.