Prime Minister Justin Trudeau found some humour in his controversial trip to India as he and other federal leaders spoke Saturday at the annual parliamentary press gallery dinner.

Prime Minister Justin Trudeau found some humour in his recent controversial trip to India, as he and other federal party leaders spoke at the annual parliamentary press gallery dinner on Saturday night.

With his February tour being the focus of many of the jabs, Trudeau himself addressed the subject by showing a slideshow of the trip and joking that he never wanted to take another trip again. 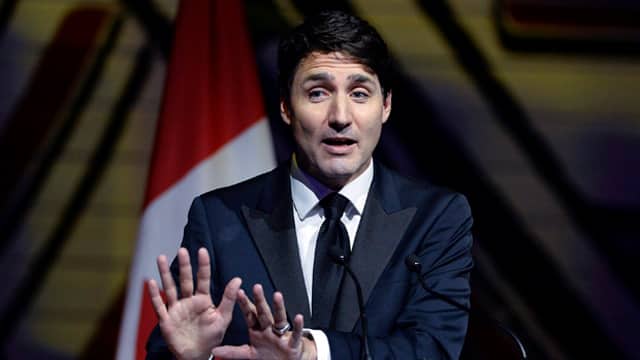 2 years ago
0:56
There were jokes and jabs at the annual parliamentary press gallery dinner in Ottawa, where the three federal party leaders all took to the stage 0:56

While Trudeau's wardrobe of colourful, traditional clothing was the target of jokes by the Indian media during the trip, the prime minister turned it around with his presentation on Saturday night.

"And here I am, meeting with the CEO of  Infosys, a company that, for the record, announced new investments in Canada during the course of this trip. But you guys didn't report on it — because I was wearing a shirt and tie. Boring."

Trudeau also joked that some people he met in India, such as Bollywood star Shah Rukh Khan, were "seriously under-dressed." 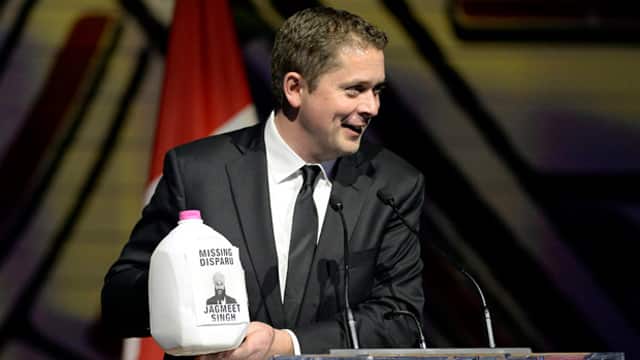 Earlier in his speech, he playfully took a shot at the Conservative leader's appearance, saying: "Andrew, it's a pleasure, as always. Your dimples are looking extra sinister tonight."

NDP Leader Jagmeet Singh poked fun at the prime minister for his attempt at an Indian bhangra dance while on the trip, then proceeded to lead an instruction of the proper way to perform the dance.

Andrew Scheer got a chance to turn the tables on Trudeau, and also brought up the India trip. 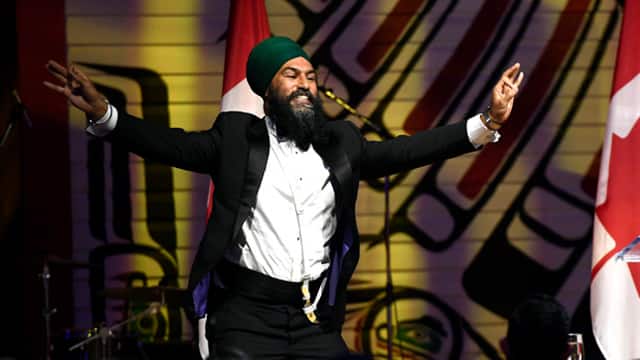 "I have to hand it to the prime minister. It was very very smart of you — you pre-empted all my jokes. [The] India trip, that was half my material tonight, so it's going to be a little bit shorter."

Resurrecting his milk-carton joke from last year's press gallery dinner, Scheer brought a milk jug onstage with him, bearing a photo of Singh and the word "missing" on it — a reference to criticism Singh has faced for not spending enough time in Ottawa.

"Jagmeet, it's great to see you here," Scheer said. "I don't know which table you're sitting at, but it's so good to see you with a seat here in Ottawa after all this time."

Several joking references were also made about Scheer and Singh being lesser known to the public.

Ending his remarks on a serious note, Trudeau thanked the journalists for their work, stressing the importance of an independent news media that holds governments to account.​