The parliamentary budget officer has calculated that the decision in this year's budget to defer a scheduled small business tax cut will have a relatively small impact on real gross domestic product, but could mean an extra $815 million a year in federal revenue within five years.

The parliamentary budget officer has calculated that the decision in this year's budget to defer a scheduled small business tax cut will have a relatively small impact on real gross domestic product, but could mean an extra $815 million a year in federal revenue within five years.

The final federal budget of the previous Conservative government legislated a gradual decrease of the tax rate and corresponding effective dividend tax rate for small businesses to nine per cent from its current 10.5 per cent by 2019.

The rate was scheduled to be cut by 0.5 percentage points per year for up to $500,000 of active business income. The general tax rate for business income is otherwise 15 per cent.

Conservative MP Pierre Poilievre asked budget officer Jean-Denis Fréchette's office to study the economic and fiscal implications of the new Liberal government's decision to defer this change for an unspecified amount of time.

In 2017-18, the federal government is estimated to realize an additional $155 million in revenue from putting off the cut. By 2020-21, that annual revenue take rises to $815 million if the Liberals don't start reducing the rate before then.

An estimated 1,240 fewer jobs may be created or maintained, according to the PBO's calculations.

At Poillievre's request, the PBO included an alternative calculation of the total impact in person-years (the annual change in full-time equivalent workers). The Liberals' deferral was estimated to result in a reduction of 3,600 person-years of employment over the period from 2016-17 to 2020-21. 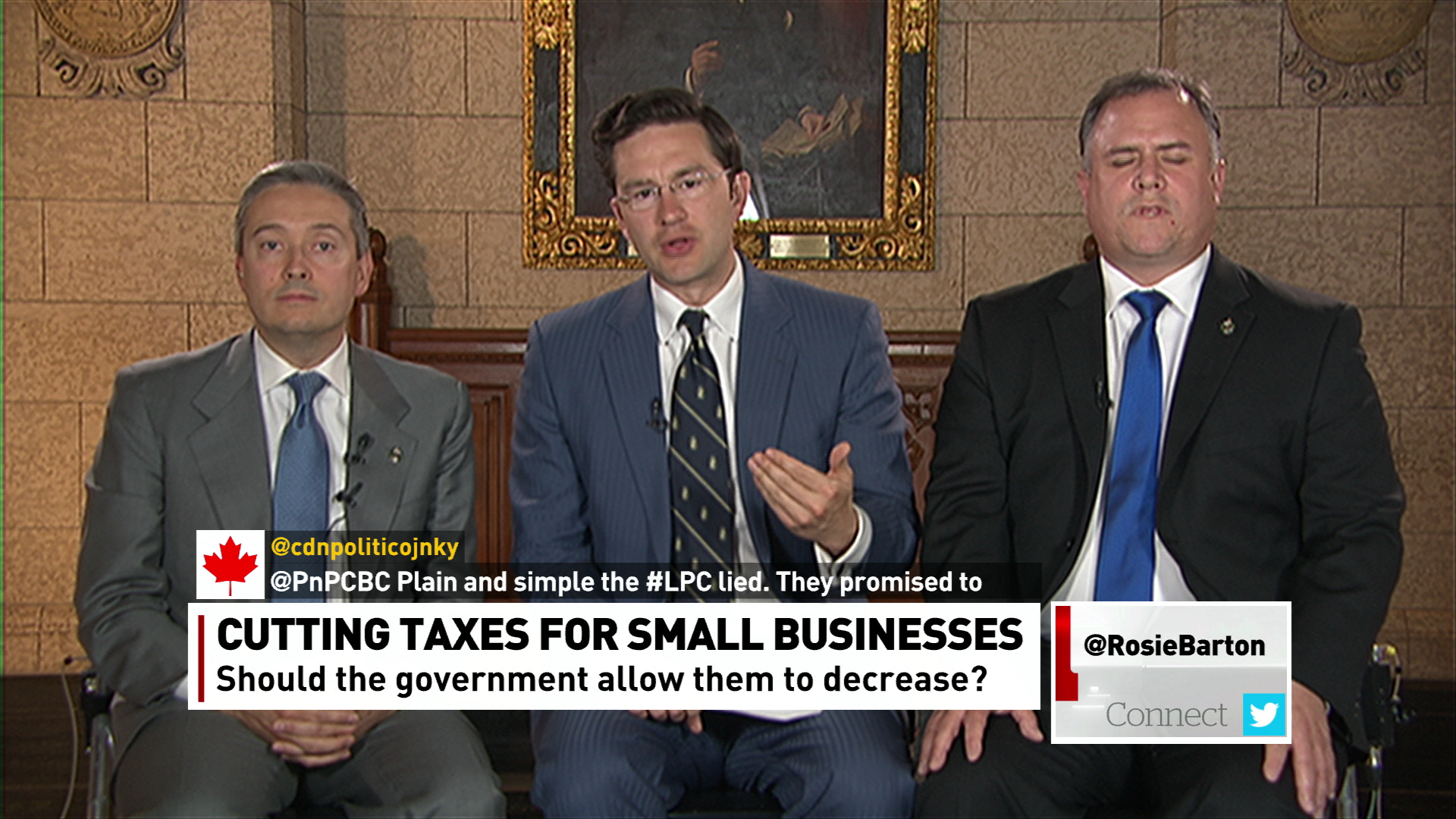 Added up over five years, the total cost to small businesses of not changing the tax rate could be $2.15 billion, the Poillievre told reporters Tuesday.

The Conservative MP drew a comparison with the billion dollars in assistance reports had suggested the Liberal government was considering for aerospace company Bombardier. The Liberals have so far made no announcement about funding.

"During the election, all three parties promised to lower the small business tax rate to 9 per cent," the NDP's small business critic, Gord Johns, said in a press release. "I'm surprised the Liberals aren't suffering from whiplash given how fast they turned around on that promise."

Finance Minister Bill Morneau has defended his government's focus on middle-class taxpayers instead, with tax cuts that improve the situation of "every customer of small- and medium-sized businesses in this country."

In question period Tuesday, Small Business and Tourism Minister Bardish Chagger noted the rate for small businesses was reduced on Jan. 1 (from 11 to 10.5 per cent — the first scheduled cut by the Conservatives.)

The PBO's report, she said, confirms the decision to maintain the current rate was the right one, because the previous approach would cost $2.1 billion but create just over a thousand jobs "with no growth to the economy."

A previous PBO report said the budget as a whole would have "significant positive impacts on the Canadian economy and create tens of thousands of jobs," she also told the Commons.

The Canadian Federation of Independent Businesses warned in March that the Liberals' broken campaign promise to lower the small business rate would cost small firms more than $900 million by 2019.

"The reason the small business tax rate exists is to allow small firms to reinvest their earnings back into their businesses," said CFIB president Dan Kelly said in a press release Tuesday. "Freezing the rate handcuffs middle class entrepreneurs' ability to grow the Canadian economy."

"The long-term impact on employment will be even more significant because small firms are so much more labour intensive than larger ones," he said.

Kelly is scheduled to appear at the Commons finance committee Thursday to discuss the budget.

Poilievre told reporters that the full behavioural impacts are not fully accounted for in the PBO's figures and echoed the CFIB's point on employment consequences.

"A small businessman or woman who owns a coffee shop and decides not to expand because their tax rate is higher, will hire fewer people and jobs will ultimately be lost," he said, while adding that he does believe the PBO's methodology is sound.

"I'm very glad that we created this office," the former Harper cabinet minister said with a smile. "Especially over the last eight months, I've come to appreciate more and more the PBO."