Chaos erupted today around Parliament Hill when gunfire broke out around the National War Memorial, and carried on in Parliament and around the downtown Ottawa area. Here's some of what MPs and other witnesses saw and heard. 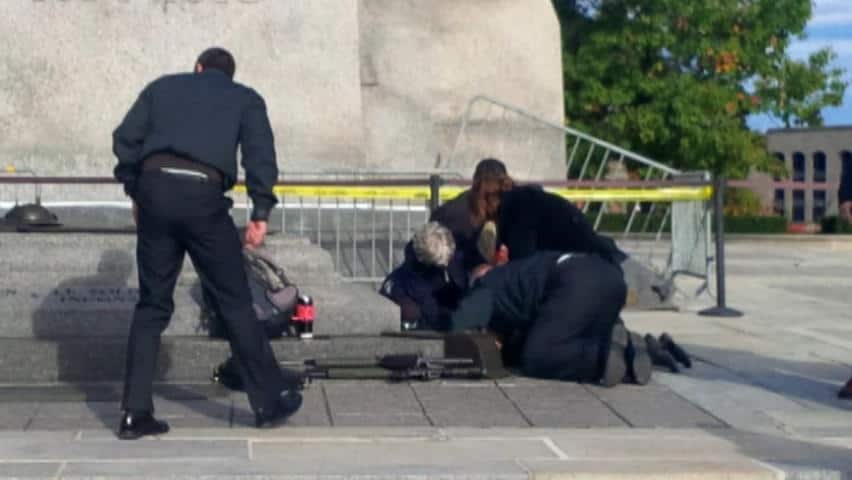 6 years ago
2:37
Witnesses describe chaotic scene on Parliament Hill after shooting at the National War memorial 2:37

Chaos erupted today around Parliament Hill when gunfire broke out around the National War Memorial, and carried on in Parliament and around the downtown Ottawa area.

Here's some of what members of Parliament and other witnesses saw and heard after gunfire started just before 10 a.m. ET:

Jan Lugtenborg, tourist from Holland who was near the war memorial:

"We were waiting there for a city tour and suddenly I heard four shots. No fireworks can be possible during the day. Suddenly I saw a small guy with long black hair ... with a long rifle and he ran away after the shots, across streets in the direction of Parliament HIll."

"I was just passing ... all of a sudden I just heard a shot, turned around and there was a guy with a rifle....and just pow pow. And then I saw one of the other Armed Forces guys just running. He barrelled over, just ran right over. The other guy just dropped.... I looked back and just dived underneath and immediately called 911."

"We were leaving Centre Block... and when we got to the top step we saw two women ahead of us get down on the ground... someone in uniform was yelling 'get down, get down' and then finally someone yelling 'gun'... Three of us kind of huddled by a pillar... I put my head up and there was a man walking up the ramp right next to the stairs and I looked at him and didn't really think much and he was fairly non-descript... I then saw a gun, a large gun... a rifle or a shotgun or something like that. I put my head back down... It was only ten or twenty seconds later when I snapped back into it and understood what was happening. It was a very long, really sustained volley of shots... The woman we were with... a tourist... started crying very violently and said her kids were inside. That's the single worst thing I could possibly imagine... There was nothing to indicate I should panic until I saw the gun... I didn't notice any expression on his face."

Ryan Cleary, MP in the NDP caucus room just steps away from shooting:

"We could hear the gunshots just outside the doors... We turned over our tables. We got down on the floor. We didn't know what was happening. What you think about is the school shootings in the United States or whatever. God only knows what was happening outside the doors... One MP brought in her new baby, and our first thoughts were when this happened, everyone said 'the baby, the baby...' After about 15 minutes we were escorted outside of the caucus room, and through the corridors of Parliament. And if the sound of gunfire wasn't chilling enough, the smell of gunsmoke... you could smell the gunsmoke as we were led outside to a secure location... This is Canada. It's not supposed to happen here."

"The caucus is on the ground floor at the back and somebody rushed in from one of the security guards and said ... 'We've heard shots, let's evacuate the building.' On our way out, somebody said, 'Those shots were from outside, let's stay in the building.' And a minute later, somebody said, 'No, those shots were from the inside, let's get out of here.' So the usual sort of chaos that is perfectly normal in situations like this.

"We could smell that gun powder. So we all stood outside waiting for further orders. I did see the prime minister's calvacade and three armoured SUVs appear in the back. So I assumed he was being evacuated. Police started to appear with machine guns and obviously the security machine, if you like, was ramping up and we stood there and waited for further instructions and eventually a bunch of security people evacuated us away from the parliament buildings and so we're no longer there."

"I stuck my head out of the office door, thinking, 'What's going on?' I saw someone running up the stairs and knew something immediately was wrong, locked the door, turned off the lights and crawled under my desk and basically stayed there for 20 minutes until security came by, guns drawn. They said, 'You're doing the right thing. Stay where you're at.'"

Kevin Lamoureux, MP who had just arrived for caucus meeting:

"I just personally thought it was like a fire alarm or something of this nature. So I casually took my time getting out of the room. And then, upon exiting the room, I hear this rapid gun fire and it was very, very loud and instantaneously, you know that there's something seriously wrong here and you could see people in a little bit more of a hurry to exit. At the time, I thought maybe it was just down the hall or around the corner because it was so, so loud."

"I've been in lockdown in the same room for about six hours now... It's been a really scary morning... A security guard came in immediately to our room, he barricaded the door with his body and he motioned for us all to get down. We did, and he made a hand signal like a gun and that's the first time I realized that those noises, that was gunfire. And it just kept going and going... There was no time to feel anything. We just did what we were told. We got down, we then quietly tried to barricade doors with chairs, with whatever we had around us. And we waited for security to tell us what would happen next. There wasn't much thinking in that moment. It was afterwards where it really hit home."