Prime Minister Justin Trudeau signed the Paris agreement on climate change during a ceremony at the United Nations in New York City this morning, giving his word that Canada will harness the power of renewable energy as a way of reducing greenhouse gas emissions.

"Today, with my signature, I give you our word that Canada's efforts will not cease," Trudeau said Friday. "Climate change will test our intelligence, our compassion and our will. But we are equal to that challenge."

The Canadian government has committed to reducing greenhouse gas emissions by 30 per cent from 2005 levels by 2030 — a goal set by the previous Conservative government.

The Trudeau government has said this objective is a "floor" rather than a "ceiling" for what can be accomplished.

During his opening remarks at the UN ceremony on Friday, Trudeau said the Paris agreement will be tabled in Parliament next month and will be formally ratified later this year.

The Liberal leader said the business case for investing in clean energy was clear, with nearly a third of a trillion dollars invested in renewable power globally last year.

"That's a trend that will continue to grow, and it's one that represents a tremendous opportunity for Canada. One that we cannot — and will not — ignore," Trudeau said to rousing applause from the UN assembly.

Trudeau drew further applause from the crowd when he defended developing countries who are facing extraordinary challenges.

"They shouldn't be punished for a problem they didn't create, nor should they be deprived of opportunities for clean growth that developed nations are now pursuing."

Trudeau told the UN that the Liberal government has committed to investing $2.65 billion over the next five years to help developing countries fight climate change.

"We're not making these investments simply to be nice, although I know Canada does have a reputation to uphold in that department," joked Trudeau.

"We're making these investments and we're following through on our commitments because it's the right thing to do."

Trudeau urged other countries to follow through with their commitments.

"We are all in this together," he said.

6 years ago
Duration 6:09
At the signing ceremony for the climate change agreement, activist and actor reads, 'the fiery trial through which we pass, will light us down, in honour or dishonour, to the latest generation'

"We are in a race against time," Ban said at the opening of the ceremony, urging all countries to quickly sign the treaty.

"Let us never forget — climate action is not a burden," said Ban. "Indeed, it offers many benefits. It can help us eradicate poverty, create green jobs, defeat hunger, prevent instability and improve the lives of girls and women. Climate action is essential to achieve the sustainable development goals."

The United Nations says it will set a record for the most countries signing an international agreement in one day.

The hope is to keep the world engaged in making the accord's goal a reality: to reduce greenhouse gas emissions enough to limit global temperature rise to well below 2 C compared to pre-industrial levels, ideally even limiting them to 1.5 C.

Following Trudeau's speech to the UN, Ed Fast, the Conservative critic for the environment and climate change, said the new Liberal government was "misleading" Canadians on the "true economic costs" of climate change.

"Fighting climate change is serious business and Canadians need to be prepared to have a frank discussion about who pays for it. Sadly, despite promises to announce a pan-Canadian framework on climate change within 90 days of the Paris climate change conference, Prime Minister Trudeau has failed to do so," Fast said in a written statement sent by his office to CBC News.

The NDP has criticized Trudeau for going to the Paris signing with "no plan", while Canada's parliamentary budget officer said the status quo isn't enough.

A new report published Thursday said that the commitments made by the provinces and territories won't be enough to get the Trudeau government where it wants to go.

According to the PBO, if Canada does hit the emissions targets it's aiming for right now, household incomes and Canada's gross domestic product would be affected, though the economic pain would not be "substantial."

The report concluded that to meet Canada's international target of 30 per cent reduction in GHGs by 2030, Canada will have to bring its emissions down by 208 million tons.

This is equivalent to taking more than all the gasoline and diesel-powered cars and trucks in the country — including off-road vehicles — off the road. 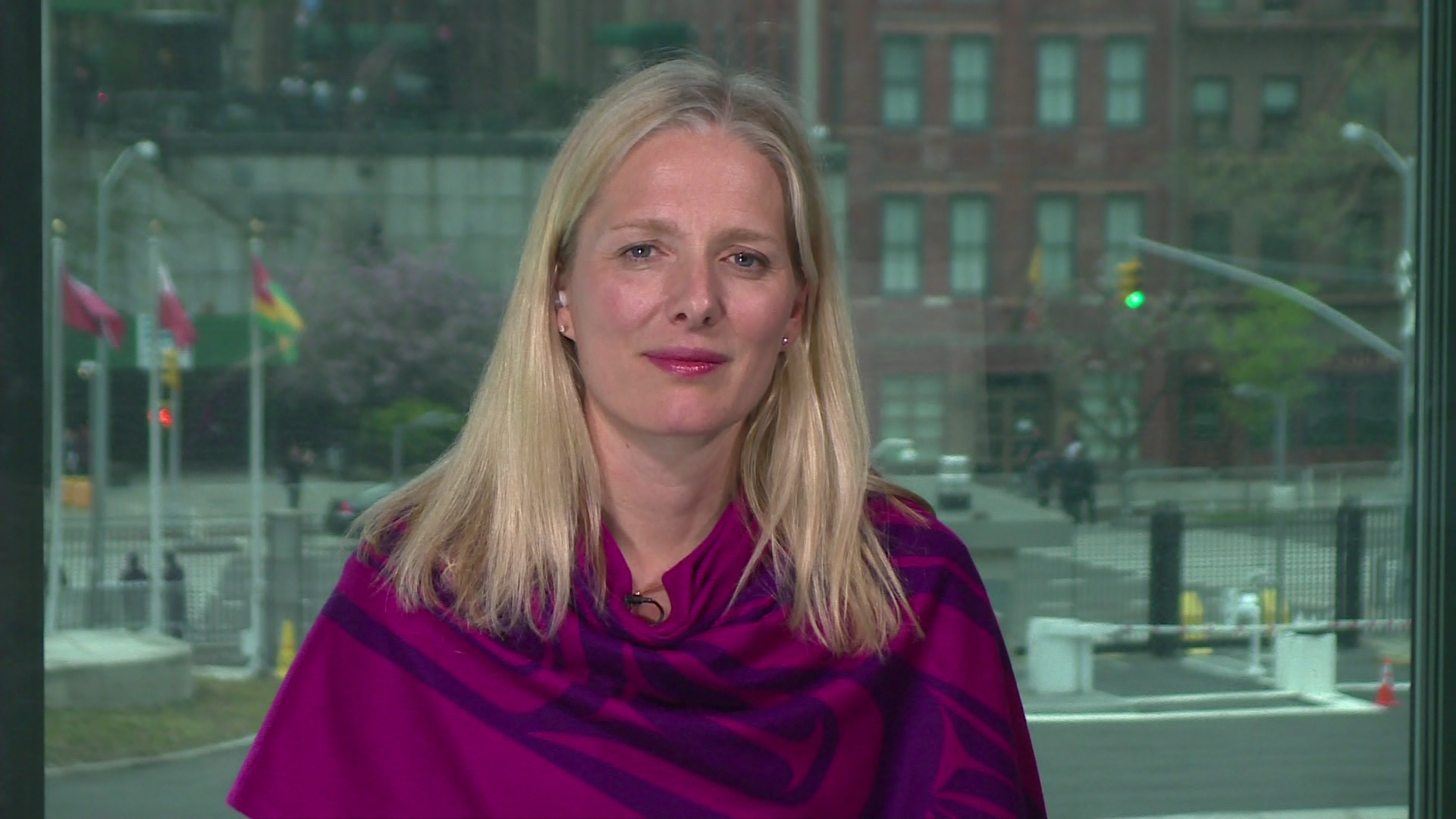 6 years ago
Duration 8:04
Environment Minister Catherine McKenna discusses how Canada plans to meet its emissions targets under the Paris agreement

Trudeau has talked of Canada showing leadership in the fight against climate change, and said that while it presents a challenge it is also an opportunity to innovate and share solutions with the world.

But in the four months since the world met in Paris, the prime minister hasn't yet found consensus between Canada's provinces and territories about precisely how to scale back those emissions.

The Trudeau government has let it be known it favours a price on carbon, but push back from some, including Saskatchewan and Yukon, means discussions about what should count as carbon pricing are still ongoing.

The environment minister told CBC News this week she believes there will be a plan by the fall, when Canada intends to ratify the Paris agreement.

The agreement enters into force once it's signed by 55 countries accounting for 55 per cent of global emissions, a threshold it appeared to have clearly surpassed Friday.

The new pact differs from the old Kyoto accord in several important ways:

The broad goal of the agreement is to keep global temperatures from rising less than 2 C from pre-industrial levels, in an effort to stave off the most catastrophic effects of rising sea levels.