The defence department has reported a sudden increase in the number of COVID-19 positive tests among soldiers. There are 28 confirmed cases now, up from five last Friday. Defence officials were unable to explain the sudden jump.

The Department of National Defence says 28 Canadian service members — 12 in Ontario and 16 in Quebec — have tested positive for the novel coronavirus after serving in long-term care facilities in both provinces.

It's a dramatic increase in the number of military pandemic cases. Less than a week ago, the Department of National Defence (DND) was reporting only five cases of COVID-19 among its members.

Late Thursday, defence officials attributed the spike in cases to several factors, including the fact that formal confirmation of a number of test results had not come back at the time of the last update.

Military members are being tested regularly, according to provincial guidelines, he added.

But it's not clear if the tests are being carried out weekly or monthly, or if Canadian Forces members showing symptoms are the only ones being tested.

Le Bouthillier said that when a military member taking part in the mission at long-term care facilities reports an illness, they're removed from duty and given medical attention, including isolation and quarantine when required. Additional troops are sent in to fill the gaps.

It's also not clear how and where the military is quarantining troops who test positive, or whether any of the reported cases are serious.

There are 1,675 service members taking part in the pandemic response operation in both provinces. Most of them are backstopping Quebec's network of long-term care homes.

The defence department did not release a breakdown showing which nursing homes the infected troops were serving in, or say whether contact tracing is taking place.

The operation was launched in response to pleas from both provincial governments as infection rates at long-term care centres overwhelmed civilian support staff.

DND committed last week to releasing information every 14 days about the number of soldiers who have become infected — but changed course today and announced there would be a daily update.

Lt.-Col. James Stocker, the commanding officer of Territorial Battle Group 1 in Ontario, said every mission has its unique challenges. He said the troops under his command are well-trained and equipped to operate in what are turning out to be hazardous conditions.

"I think they are quite well prepared for the task," Stocker told CBC News today, prior to the release of the new figures by DND. 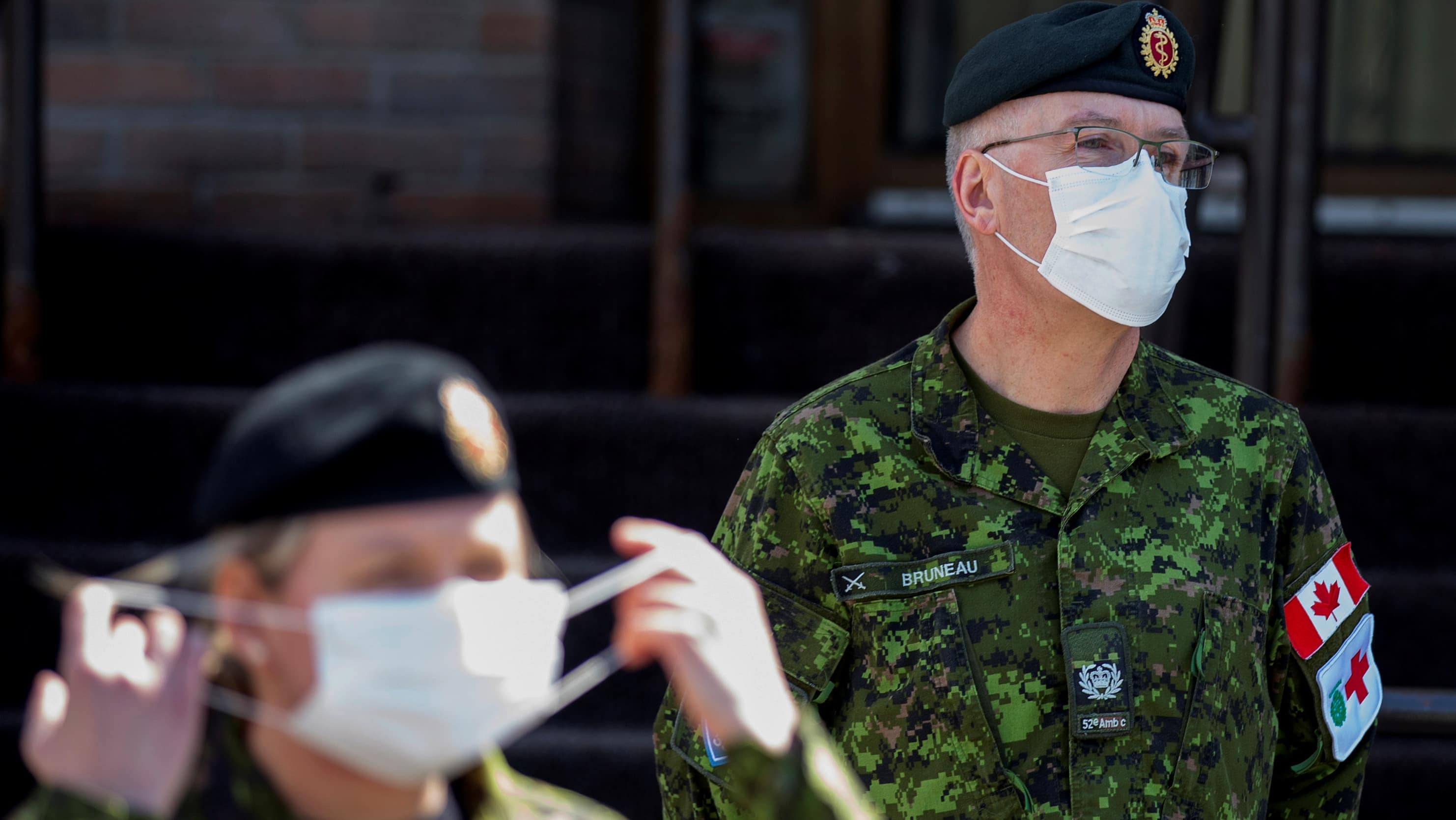 What the military is doing inside long-term care homes

10 months ago
7:33
Lt.-Col. James Stocker explains what duties Canadian soldiers are taking on inside long-term care facilities and how they're driven by a desire to serve. 7:33

The sudden jump in cases will lead to greater scrutiny of the safety precautions taken by the military, and of their personal protective gear.

The troops in each nursing home — a mix of medical personnel and general purpose soldiers — take their cues on the protective equipment they need (such as masks, gowns and face shields) from provincial authorities and the guidelines laid down by the military's medical branch and the Public Health Agency of Canada.

Whether they wear N-95 respirators on the job depends on the individual circumstances in each home, and how close they are to residents infected with the novel coronavirus.

"All I can offer is that we follow the guidelines of medical advisers," said Stocker. "They offer a range of guidelines on the situation and we govern ourselves accordingly."

He said he remains confident in the advice he's getting from provincial and local authorities.

The military has adjusted the level of protection for Canadian Forces members in some facilities. At the Vigi Mont Royal in Montreal, soldiers started out wearing N-95 masks but shifted to using full shields, visors and hoods when reports surfaced that the virus was being spread through the ventilation system.

A veterans advocate who has been tracking the pandemic deployment of troops said last week he had no issues with the protective equipment issued to Canadian Forces members taking part in pandemic response — but he was worried about their level of training.

Retired corporal Sylivain Chartrand, of Canadian Veterans Advocacy, cited one report from a suburban Montreal long-term care home of troops changing out of their work clothes and back into their uniforms in the same room.

He called for better instruction and for the federal government to designate the long-term care home deployment as a "special duty" operation — which would open the door to participating Canadian Forces members receiving long-term veterans benefits should they need them.