Terry Milewski on what the CBC's raw footage of the Oct. 22 Parliament Hill shooting reveals about what happened and how people reacted. 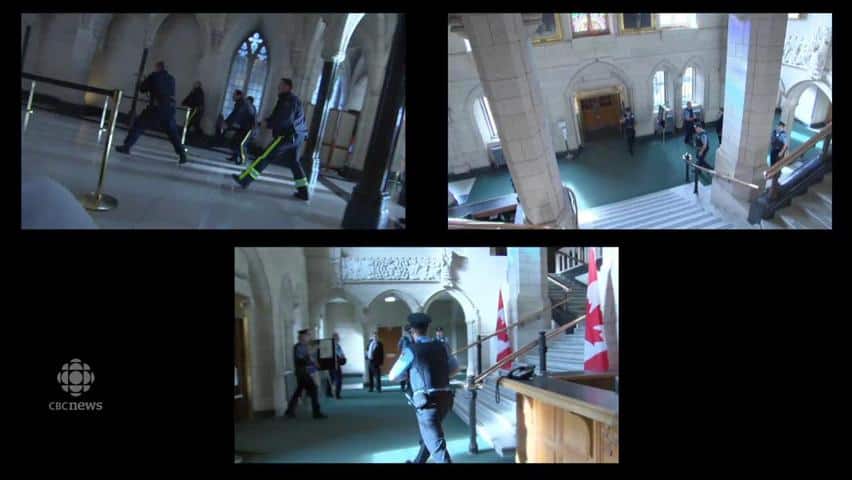 From Jean Brousseau's point of view, it was gunfire and chaos, and then ... nothing. Seconds ticked by, and nobody fired.

A full minute ticked by ... and then, deafening chaos again.

The veteran CBC cameraman was near the Hall of Honour on Parliament Hill when he heard the shots on that Wednesday morning at 9.53 a.m. He knew nothing of Michael Zehaf-Bibeau shooting Cpl. Nathan Cirillo with a hunting rifle just a minute and a half earlier.

But Brousseau knew to take cover.

Hunkering down in a small alcove with soundman Martin Blais, he stuck an arm out to punch the button and start his camera rolling. What he saw tells a story.

The footage picks up after the initial exchange of fire at the doorway. Already, security guard Samearn Son has been shot in the leg while trying to wrestle the rifle out of the shooter's hands.

Zehaf-Bibeau has run out of sight down the hall towards the Library of Parliament just before the camera rolls.

The tape captures the voice of a guard yelling "Drop the gun! Drop it! Drop it!" 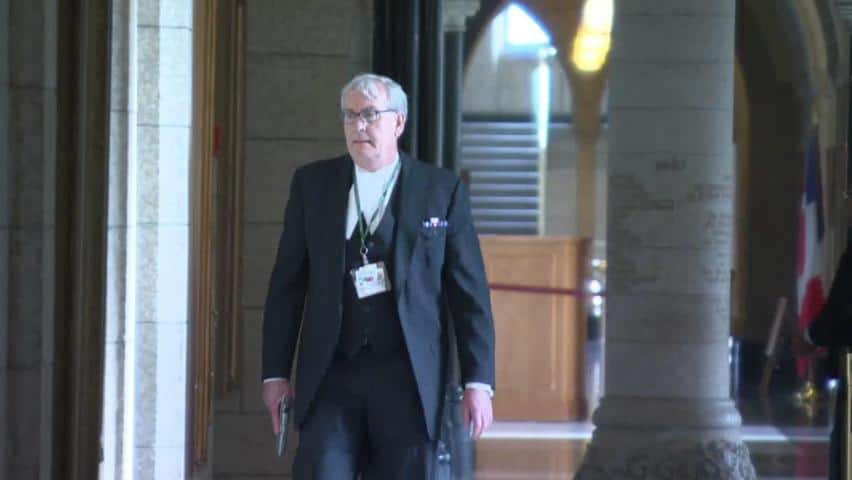 Clearly, Zehaf-Bibeau didn't drop it. Seconds later, two loud shots boom out — but it's not clear who fired them. We can't tell if Zehaf-Bibeau was hit.

Brousseau's lens is pointed across the empty hallway. He steadies the camera as time ticks by.

It keeps ticking. A few shouts — but no shots. Nobody's shooting at Zehaf-Bibeau and he's not shooting back. Is he reloading? That takes a while, bullet by single bullet, with a lever-action deer rifle.

Brousseau steadies his camera for a better view. Finally, 45 seconds after that second shot, some Mounties appear, cautiously advancing down the hallway with their guns drawn. They know they are going towards danger but urge each other on: "Go! Go! Go!"

An officer brushes by Brousseau and tells him, "Stay there!"

But a cameraman is a cameraman. Brousseau edges his camera forward to peer down the hall. By now, just over a minute has elapsed since that second shot. Then, one loud report is heard — perhaps the rifle? — followed immediately by the pop-pop-pop of a semi-automatic pistol.

​Six, seven, eight — at least a dozen rapid-fire shots before there are so many shots simultaneously that you can't count. Thirty, perhaps, before it's all over.
We know who that was with the pistol, of course: Sergeant-at-Arms Kevin Vickers.

Moments later, the CBC's Mike dePaul spots Vickers with gun in hand, walking calmly down the hall to report to terrified MPs that it's okay, "I put him down."

But Vickers isn't the only hero caught on tape.

Vickers himself insisted on sharing the credit — singling out the wounded guard, Samearn Son. So where is this unsung hero and why don't Canadians know more about him?

Answer: he's taking no bows and giving no media interviews. Lightly wounded, he's resting at home. Still, he was captured on tape, too.

Downstairs when the shooting began, another CBC veteran, Yves Levesque, also started rolling as soon as he heard shots. For the first few seconds, people seem not to register the sound, going about their business. Moments later, there's panic.

"Gunshots! Gunshots! Everybody out!"

Caught in the hallway, Liberal MP Judy Sgro darts this way, then that; nobody knows where to go.

Levesque keeps rolling as he runs down a hallway towards the MPs' entrance to the House of Commons.

"Where do we go?" someone asks. Nobody answers. Guards there don't seem to be learning much from their radios.

One says he can't tell whether the shots are from inside or outside.

Then, the final fusillade is heard and more guards, with pistols drawn, race up the stairs towards the fire. Again, people scatter. Levesque is told to run over here, then over there, rolling all the way. Finally, a guard ushers him out of an exit next to the Peace Tower.

There, a wounded security guard is kneeling on the sidewalk. It's Samearn Son, who has stumbled out of the building, nursing his leg.

Someone asks, "Are you OK?"

Samearn replies, "I'll survive." Then, he limps towards the camera for a moment, seemingly still on the job, checking out the black car that the gunman hijacked only three minutes earlier.

He'll survive. But the chances are, he won't forget. 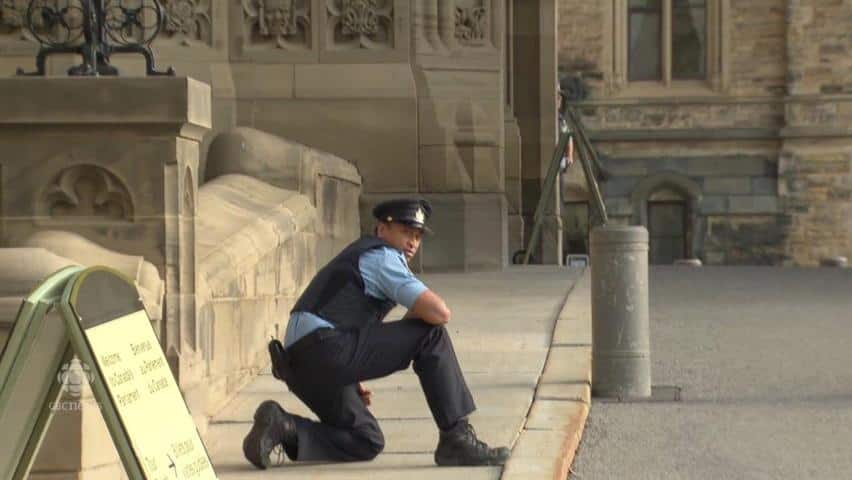