The National War Memorial was the scene of a touching moment between a local paramedic and an imam as Canadians returned to the grounds of Parliament Hill for the first time after an attack in the nation's capital that left one soldier dead. 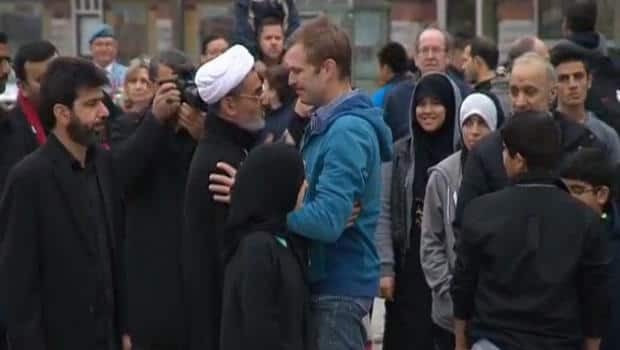 6 years ago
3:14
CBC cameras capture a moving moment between an Iman and another person at the War Memorial in Ottawa 3:14

The National War Memorial was the scene of a touching moment between a local paramedic and an imam as Canadians returned to the grounds of Parliament Hill for the first time after an attack in the nation's capital that left one soldier dead.

On Saturday, many gathered at the National War Memorial to pay respects to Cpl. Nathan Cirillo, including Imam Haider al-Shawi from the Ottawa al-Mahdi Centre. He laid wreaths at the foot of the monument and spoke to the crowd about the shooting and how it doesn't represent his religion.

Ottawa paramedic Kyle Pooler was among the listeners. The speech was so touching, Pooler said, he was compelled to hug the imam.

"It was very beautiful. All of us were in solidarity with Canada," Pooler told CBC News.

"It’s one of those things where there’s no need for animosity or hatred," said a choked-up Pooler. "I just love that … how they went up and said in his language and had someone translate for everybody: ‘This is not Islam. This not Muslim. This is not the people we are representing.'"

Adjacent to the memorial, the grounds of Parliament Hill attracted scores of visitors as it reopened to the public for the first time since the shooting. Many were still stunned by Wednesday's attack, which took place as Prime Minister Stephen Harper was meeting with lawmakers.

Having Parliament Hill open without a huge police presence stopping the public from coming in is very important and symbolic to Canada's openness as a country.- Alex Borisenko, Ottawa resident

Police presence was light at the grounds on Saturday and flags flew at half mast from the tops of stone turrets. The parliament building itself remained closed to the public, though House Speaker Andrew Scheer said the building would reopen for tours and visits on Monday.

"It is very important to me that they reopened Parliament Hill. Terrorism won't stop Canada from being open and people going about their lives," said Alex Borisenko, 25, a software developer living in Ottawa.

"I know that there are measures to increase security, but having Parliament Hill open without a huge police presence stopping the public from coming in is very important and symbolic to Canada's openness as a country."

The attack in Ottawa on Wednesday — as well as an attack in Quebec on Monday that also left one soldier dead — were the work of Canadian citizens, reported to be recent converts to Islam, who appear to have operated independently, police said.

The first victim, 53-year-old Warrant Officer Patrice Vincent died when a man ran him over with a car in Quebec, while the second, 24-year-old Cirillo was gunned down while standing a ceremonial watch at the National War Memorial.

The attackers, 25-year-old Martin Rouleau, who drove over Vincent and another soldier who survived, and 32-year-old gunman Michael Zehaf-Bibeau, described as troubled and drug addicted, both developed their radical views in Canada, police said.

Cirillo's body was returned to his hometown of Hamilton, Ontario, about 500 kilometres southwest of Ottawa, along the "Highway of Heroes" honouring war dead, on Friday. His funeral was scheduled for Tuesday.

Outside parliament, visitors struggled to process the killing.

"I'm here reflecting. My grandson is in the military and I have four brothers who served in World War Two," said Rosemary Errington, 80, a retiree from Sault Ste. Marie visiting the site with family. "It really hits home."

Scheer said counselling sessions will be held on Monday and Tuesday for Commons staff.