When Veterans Affairs Minister Seamus O’Regan left journalism, he said it was “a shock to his system,” a painful time in his life that gave him insight into how members of the Canadian military feel as they take off their uniforms for the last time.

'Good Lord, what a insensitive and inaccurate thing to say,' says veteran

When Veterans Affairs Minister Seamus O'Regan left journalism, it was, he said, "a shock to his system" — a painful time in his life.

And that — he told a roomful of soldiers and civil servants Monday — has given him insight into how members of the Canadian military feel as they take off their uniforms for the last time.

O'Regan's personal recollection featured prominently Monday as his department and National Defence publicly announced another overhaul of the system that is supposed to guide retiring soldiers, sailors and aircrew back into the civilian world.

But his efforts to compare his own career arc to the problems facing many ex-military members struck a sour note with his intended audience.

"Good Lord, what a insensitive and inaccurate thing to say," said Barry Westholm, a former master warrant officer and sergeant-major for the Joint Personnel Support Unit (JPSU) in Eastern Ontario. He resigned from the military to protest the deterioration of the unit that was supposed to help guide injured soldiers back to their jobs or out of the military.

"It shows me he has no concept of what he is dealing with."

The federal government — under both the Liberals and Conservatives — has struggled to find a way to make that transition smoother, less painful and confusing.

There have been multiple studies and recommendations on how to make it better, notably from the former military ombudsman Gary Walbourne.

What O'Regan, Defence Minister Harjit Sajjan and Chief of the Defence Staff Gen. Jonathan Vance announced Monday was a new transition system. They rolled out a series of online and training initiatives, but set aside the details of the new, more integrated and personalized system to further tinkering through a pilot program.

O'Regan told an audience of troops and civil servants assembled for the announcement that he can relate to the pain and confusion soldiers sometimes feel upon leaving the military because of his own emotions as he left an "extremely structured" job in TV journalism.

"As many of you know, I had very difficult transition leaving journalism, but more importantly, leaving what I had for 15 years in a broadcast medium that was extremely structured," he told an assembled audience of troops and civil servants.

O'Regan spent over 10 years as host of CTV's Canada AM and went on to do special correspondent assignments for the network before moving into radio and independent production in 2012.

"And when I left, it was a shock to my system," O'Regan said, citing his battles with alcoholism. "I suffered with addiction. I suffered with depression. I did not transition well, and I felt I'd lost purpose in my life."

He entered rehab in January 2016 and said the experience has taught him a lot.

"I know enough about the military that I would never, ever say that I have, you know, an idea of what it's like to go through a transition [from] serving to becoming a veteran," O'Regan said. "But I got a peek into that window,"

Ever since Canada's Afghan war mission ended, more and more experts have linked rough transitions to civilian life with a spike in homelessness and even suicide among former soldiers.

Westholm said that, even with the minister's qualification, he never thought he'd hear such a comparison.

Conservative MP and former veterans minister Erin O'Toole called O'Regan's comments "very inappropriate" and added that it's not the first time he's heard them from the minister. 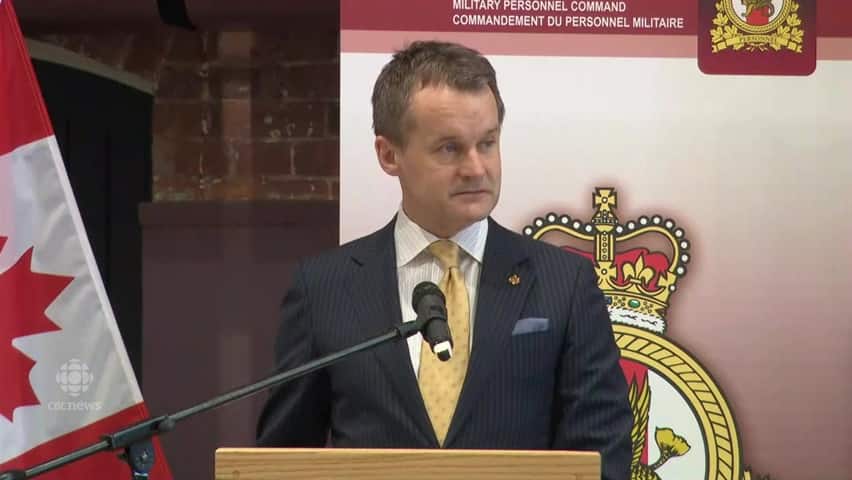 2 years ago
1:04
Veterans Affairs Minister Seamus O’Regan recalls his tough transition from journalism into politics calling it "a shock to his system" during the Canadian Armed Forces Transition Group ceremony Monday. 1:04

"I'm upset by it," said O'Toole, a former air force officer, who said he heard a variation of the minister's story at a mental health breakfast last spring.

"It makes veterans cringe because it shows him out of connection with veterans ... In his case he wasn't in uniform, and I don't believe he should compare leaving a television with the trauma of leaving the military with an injury."

O'Regan said his brother, a serving naval officer, has repeatedly underlined the necessity of fixing a system beset by delays in delivering benefits and services, as well as duplication.

The Liberals made fixing that system a key commitment in both their election pitch to veterans and their defence policy, released 18 months ago.

"We promised that you and your families would be better supported as you navigate the intricacies of military careers and to improve support to those of you who have served as you end your military career and transition to a life after service," said Sajjan.

"And today we are delivering on those promises."

What the Liberals delivered on Monday, however, was a partial fix that includes a number of initiatives that put the burden on departing members to educate themselves and get ready for their new lives.

One of the biggest changes involves allowing members to take their last month on the job to prepare themselves for civilian life, rather than doing their day-to-day military work.

That prep time is crucial, given the dizzying array of paperwork and expectations. Failing to get that paperwork in on time contributes to backlogs in pension payments and benefits.

The federal government's planned major restructuring, which could include more personalized services for departing military members and personal assistance in navigating the system, will await the results of a pilot program that will take place at Camp Borden, north of Toronto.

National Defence and Veterans Affairs are working together "to ensure there are no gaps in services offered to you as you transition out of uniform into your new status as a veteran," said Sajjan.

Westholm pointed to a series of studies going back to the early 2000s, some done by the defence department itself, about the lack of transition services.

"If they have to take five more years to institute a fully integrated approach, then they're really not serious," he said, indicating that by the time the trial is done, "we'll have had 15 years of trial and error."