Omar Khadr hopes an apology from the federal government will help restore his reputation, but tells CBC's Rosemary Barton he's sorry that the apology or monetary settlement could cause pain for the family of the soldier he is accused of killing.

Omar Khadr hopes an apology from the federal government will help restore his reputation, but is sorry that the apology or monetary settlement could cause pain for the family of the soldier he is accused of killing.

"I think it restores a little bit my reputation here in Canada, and I think that's the biggest thing for me," Khadr, now 30, said during a feature interview with CBC's Power & Politics host Rosemary Barton.

The Liberal government confirmed today it has apologized to Khadr and awarded him a settlement as part of the wrongful imprisonment civil suit his lawyers launched against Ottawa. The government  said Friday that details of the settlement are confidential, but sources told CBC News that amount totalled $10.5 million.

"I can't say anything about that one way or the other," Khadr said in an interview. "It's part of the agreement that I don't talk about those things." The full interview is posted at the end of this article.

News of the impending deal drew sharp criticism among those who believe Khadr is a terrorist who killed an American soldier during a firefight in Afghanistan and does not deserve compensation. 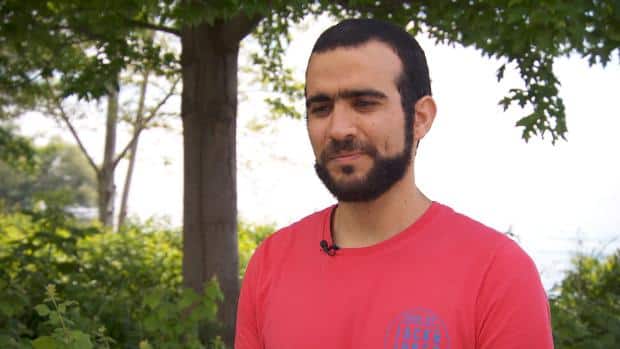 The Toronto-born Khadr moved with his family back to the Middle East when he was 10 years old. His father, Ahmed Khadr, ended up as a money man for Osama Bin Laden and directed his children to support al-Qaeda.

On July 27, 2002, when Omar was 15 years old, he was captured by American soldiers during a firefight at a suspected al-Qaeda compound in Afghanistan that resulted in the death of Sgt. Christopher Speer. Khadr was seriously wounded in the firefight.

Khadr was taken to notorious prisons in Bagram, Afghanistan, and U.S.-controlled Guantanamo Bay, Cuba, and tortured, which contravened two UN Conventions that Canada had signed — those against torture and the rights of the child. The latter convention says signatories should treat child soldiers as victims and "accord to these persons all appropriate assistance for their physical and psychological recovery and their social reintegration."

Canadian intelligence officials obtained evidence from Khadr under "oppressive circumstances," such as sleep deprivation, during interrogations at Guantanamo Bay in 2003, and then shared that evidence with U.S. officials, said the Supreme Court of Canada in a 2010 ruling.

After 10 years, mostly in Guantanamo, Khadr signed an agreement that would allow him to return to Canada in 2012 to serve the remainder of his sentence. He pleaded guilty to five war-crime charges and received an eight-year sentence from a U.S. military commission.

While other countries repatriated their prisoners from Guantanamo, critics argue the Conservative government under Stephen Harper did little to hasten Khadr's return, despite pleas from his lawyers and civil rights groups.

Khadr was released in May 2015 pending an appeal of his war crime convictions, of which he argued that his admissions of guilt were made under duress.

Lawyers for Khadr, who now lives in an apartment in Edmonton, had been seeking $20 million in a wrongful imprisonment civil suit against Ottawa. 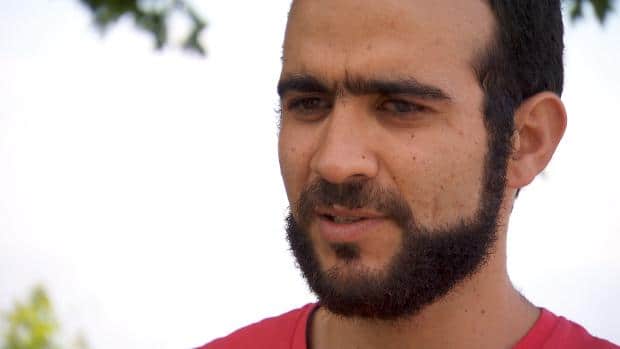 Khadr: 'It's easy to make a conclusion about somebody without knowing them'

"I never was angry or upset about what happened. It's been hard you know, finding jobs or going to school and stuff with my past reputation," he said. "So this is going to help me move forward."

Khadr said he doesn't believe the apology will make people forget his past, but will help them think "that maybe there's more to what happened and maybe look more into it and understand more of what happened."

I have a lot of experience with pain, and I have an appreciation of pain.- Omar Khadr

He said there have been a couple of occasions where job applications have been rejected because of his controversial history.

"They come back and they don't want to do it for no good reason. Sometimes they say people are not comfortable with your past, and I understand people's livelihood. But I would also like to be able to move forward without having that."

"I think it would make it easier for them with this apology to hire me or consider hiring me."

Although Khadr would not comment on reports of the settlement, he said that "this is not a time for celebration" but a time for "reconciliation, remembrance, healing."

"I really hope that the talk about settlement or the apology does not cause people pain and if it does, you know, I'm really sorry for the pain."

Asked if he was talking about the Speer family, Khadr said yes, and that he was "really sorry for their pain" and that causing them pain "is not my intention."

The lawyer for the widow of Speer had said Tuesday an application has been filed so that any money paid by the Canadian government to Khadr will go toward the widow and another U.S. soldier, Sgt. Layne Morris, who lost an eye, during that firefight in Afghanistan.

A wrongful death and injury lawsuit against Khadr in 2014 was uncontested by Khadr or his representatives. In 2015, a U.S. judge granted Speer and Morris $134.2 million US in damages.

​Khadr said he's still in contact with members of his family, who are controversial for their extremist views.

He said he's "very different" from them, and that you can choose your friends, but you can't choose your family.

Khadr said he has no ill feelings toward those Canadians who have strong negative opinions about him, but that it's easy to make conclusions about someone without knowing them.

"All I ask is for them to make an informed opinion about me. But take the time, get to know me personally and then whatever you choose, whatever opinion you want to make of me, I will respect that."

Khadr also told CBC News  that he just wants "to be a normal person" and finish his nursing program and work in hard-to-serve communities, where he'd like to specialize in relieving people from pain.

"I have a lot of experience with pain, and I have an appreciation of pain," he said.

He said his goal is to concentrate on the future — he doesn't want to forget the past so much as not dwell on it, because he can't change it.

"This is how I survived," he said. "I try to focus on the things I can change."​ 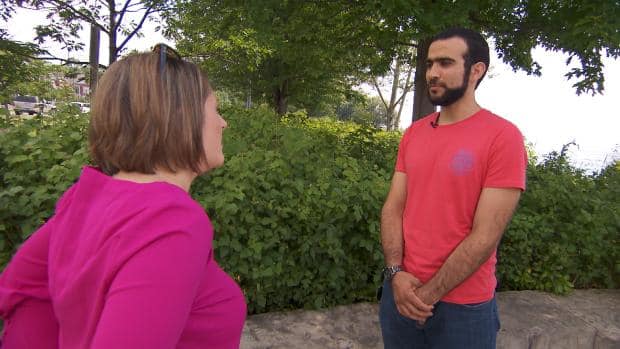 With files from Rosemary Barton and The Associated Press