Cost to build navy's new warships more than doubles to $30B

An independent analysis of the largest military procurement in Canadian history has found the price of 15 new warships for the navy has more than doubled, from $14 billion initially set aside for construction to more than $30 billion. 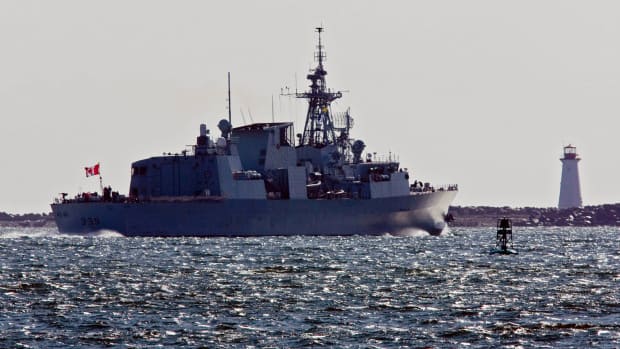 5 years agoVideo
2:38
Independent analysis suggests Canada will have to accept fewer ships in their plan, or spend a total of $30B 2:38

The price of 15 new warships for the navy has more than doubled, from $14 billion initially set aside for construction to more than $30 billion, says an independent analysis of the largest military procurement in Canadian history.

That takes the total cost to upgrade Canada's navy to $42 billion — $16 billion more than the $26.2-billion approved by the government for the Canadian Surface Combatant program.

That would make the warships component alone more expensive than the approved budget for the entire national shipbuilding program, which also includes supply ships, coast guard ships and Arctic vessels.

The cost analysis was conducted by the firm A.T. Kearney earlier this year.

Kearney was asked to provide a qualitative analysis that examines "the relationship between the draft requirements and the feasibility and affordability of delivering a solution that achieves full mission performance."

The report has not been released, but CBC News has learned the blunt answer is that it would be impossible to deliver the ships the navy asked for at the price the Defence Department had set.

A spokesman for the military said the report demonstrates the government is "exercising due diligence" and exploring options to "meet full mission performance."

"The work being done serves to inform our costing process and is certainly not a final, estimated cost for the project," Daniel Le Bouthillier said in an email to CBC News. "It is part of our commitment to being responsible stewards of public funds and ensuring value-for-money as Canada works towards rebuilding its navy."

Le Bouthillier added that "is extremely premature to discuss budgets on a ship for which requirements and capabilities have not yet been set or designed."

The project budget was set years ago at $26.2 billion. Of that, $14 billion was to be spent on the design and construction of warships.

The rest of the budget is for the provision for ammunition, infrastructure costs such as jetties, spare equipment and support.

It's the cost for the design and construction that has been found to have more than doubled.

Why do we need to be better than the Brits and the Americans? We're a middle power.–Former Conservative official

Those costs were confirmed to CBC News by officials and staff of the former Conservative government, some of whom had been briefed on the report's contents.

One of those sources said the navy had specified requirements for its new warships that would make them "the most capable ships in the world."

The former official said the navy's requirements would make the vessels among the fastest single hull warships in operation.

Some capabilities don't yet exist

Many of those requirements are also said to be developmental, in other words a capability that does not yet exist or requires further work before it's ready for production.

Developmental costs are hugely expensive and difficult to peg, industry sources say. It's impossible to know exactly how much it will cost to develop the technology to make a requirement feasible.

That level of complexity — and the budget uncertainty it produced — angered one former Conservative official, who said the navy was demanding a warship beyond Canada's needs.

"Why do we need to be better than the Brits and the Americans," the official wondered. "We're a middle power."

The Kearney report is controversial within government. It was paid for by Irving Shipbuilding Inc., the company selected to build combat ships for the navy.

We are early in a process to select a warship design and to then subsequently refine both reliable costs and final capabilities.-  Vice-Admiral Mark Norman, navy commander

The audit was tendered with the approval of Conservative government officials, who after recognizing increasing budget problems in the $39-billion National Shipbuilding Procurement Strategy were anxious to see an independent assessment of what the Defence Department's demands would actually cost.

The navy's commander, Vice-Admiral Mark Norman, said the navy's operational requirements had been reviewed by a third party and that only some of those findings are reflected in the Kearney report.

"The remainder, which speak to the operational requirements and the potential opportunity for cost-capability trade-offs in the months ahead, are still under review," he said in a statement. "We are early in a process to select a warship design and to then subsequently refine both reliable costs and final capabilities.

"This process will take a couple of years, and we need to explain it better to government and the taxpayers. "

Some allege the Defence Department tried to keep the Kearney report under wraps, claiming the information was protected by regulation.

The tension between Defence and other actors in the procurement system has been high since former public works minister Rona Ambrose forced a reset of the controversial process to replace the CF-18 fighter jets.

That file became problematic once it was learned the full cost to own and operate the preferred F-35s was in the neighbourhood of $25 billion — far more than the $9-billion purchase price Defence had once advertised.

There's a similar discussion underway with ships. The full cost of 15 of those new warships, including personnel, operating and maintenance costs over 30 years, was set at more than $90 billion.

With the production cost increases pegged by Kearney, the full warship budget grows to more than $106 billion.

Others in the industry expect production costs to grow even further.

They point to Australia's current experience with the Hobart-class warship, which is a rough equivalent in air-defence capability to what is proposed for three of Canada's 15 new warships.

Australia's Hobart-class is over budget and projected to cost nearly $3 billion per ship. If that trend holds for Canada, costs could climb yet again.

It's this reality the new federal cabinet was briefed about earlier this month.

Last week, CBC News reported Defence Minister Harjit Sajjan and Public Services Minister Judy Foote were warned the shipbuilding strategy is in need of repair, with costs for some projects soaring by as much as 181 per cent and others on the cusp of being cancelled.

A briefing to the ministers called for an "action plan" to get the program back on track.

Put simply, the government will have to decide how much capability is appropriate for the Canadian navy and at what cost.

Dave Perry, a defence analyst at the Canadian Global Affairs Institute, said there is a significant funding issue that could affect capability.

Perry agreed officials have underestimated the true cost of each ship.

"I certainly think that [the cost is] at least $2 billion for a fully capable ship, the ones they're talking about with sophisticated air defence capability, as well as the ability to lead in a task group function," he said. "And potentially more, depending on exactly what goes into it and when they're built."