'Those scars will never heal': piecing together a gunman's murderous rampage in Nova Scotia

Nobody would believe you if you said last week that Portapique, N.S. and the rural area surrounding it would be ground-zero for one of the country's worst ever mass shootings.

At least 22 people were slain at 16 different crime scenes

Portapique is nestled along the peaceful shores of Cobequid Bay, 130 kilometres northwest of Halifax. It's a close-knit community with fewer than a hundred permanent residents. That number doubles in the summer as people from Halifax make their way north to spend the warmer months in this picturesque part of the province.

Nova Scotia has seen its fair share of tragedy. The Westray mine explosion, the disaster at Glace Bay's No. 26 colliery, the senseless murders at a McDonald's in Sydney River and the downing of Swissair flight 111 all come to mind.

But nobody would believe you if you'd told them last week that this town, and its surrounding rural area, would be ground-zero for one of the country's worst ever mass shootings.

"People are in shock. We're still in shock," Lenore Zann, the MP for Cumberland-Colchester, said in an interview Monday. "We're a beautiful, quiet, peaceful little part of the world. Everyone is warm and caring and we'd prefer to be known as that."

"The mourning is going to go on for some time as the shockwaves keep growing and more and more people realize who was killed so senselessly. We all know each other here."

Police identified the killer as Gabriel Wortman, a 51-year-old denturist and owner of a clinic in Dartmouth. The RCMP promised Monday to release a timeline of the shooter's murderous march later this week. In the interim, CBC News has been able to piece together some of his movements.

The deadly mayhem started Saturday; 12 hours later, at least 22 people would be left dead, in addition to the gunman himself. (The number of victims was revised again Tuesday. In their latest update, police said there 23 were dead, but later clarified that number included the gunman.)

'It's very bad what's going on down there'

The provincial RCMP tweeted shortly after 11:30 p.m. Saturday that they were responding to a "firearms complaint" in the Portapique area and asked residents to stay inside and lock their doors. Wortman owned multiple properties in the area; a neighbour reported multiple homes along Portapique Beach Road were on fire.

"There's a person down there with a gun. They're still looking for him. It's very bad what's going on down there," an officer said just after 11 p.m. according to a transcript of the police scanner.

The relationship between the gunman and the first wave of victims has not yet been confirmed by police but RCMP Chief Supt. Chris Leather said Monday some of them were known to the gunman before the attacks.

The police said they found "several" casualties inside and outside a residence in the area. Locals said people were gunned down as they tried to escape the flames.

Lisa McCully, a much-loved school teacher in neighbouring Debert, was one of the victims.

Jenny Kierstead found out Sunday morning that her sister had been murdered by the shooter — someone McCully had known casually.

McCully put her kids in the basement when word of trouble in the area spread.

"I just wish she had stayed there but she was a natural-born leader and was so helpful to everyone. And she knew that there was a house on fire, that people were in need and she went out to be of assistance," Kierstead told CBC.

"I don't know the details. I'm protecting myself and my family from the gory details."

WATCH | How the 12-hour shooting rampage in Nova Scotia unfolded: 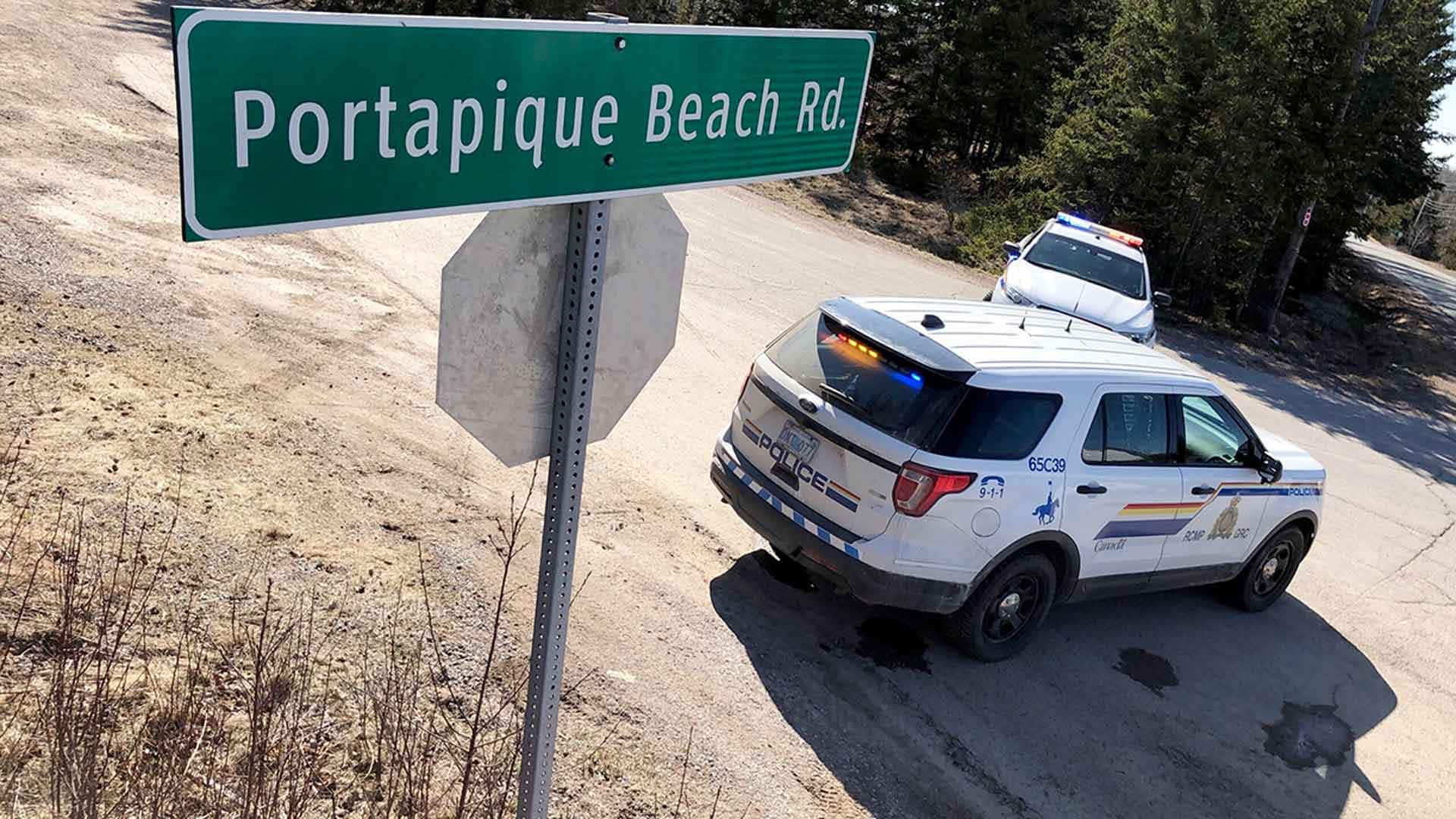 How the 12-hour shooting rampage in N.S. unfolded

11 months ago
3:28
National co-host Adrienne Arsenault looks at how the 12-hour shooting rampage through rural Nova Scotia unfolded overnight Saturday and into the early morning of Sunday. 3:28

The force's Twitter feed then went silent overnight as the shooter evaded police and moved throughout northern and central Nova Scotia in a mock RCMP vehicle.

The police warned area residents that the man in question was also wearing a RCMP uniform — one that was virtually indistinguishable from the kit officers normally wear.

On a map, the gunman's path looks like a triangle — a 50-kilometre route starting in Portapique, moving north through Colchester County to Wentworth and then south along the area's rural back roads to places like Debert.

At least four people were killed in Wentworth, a town near one of the region's most popular ski hills.

Sean McLeod was a Correctional Service Canada (CSC) employee at Springhill Institution, a federal prison in Springhill. He lived in West Wentworth with his girlfriend, Alanna Jenkins, another CSC employee at the Nova Institution for Women.

A neighbour called 911 to report an explosion and gunfire at their home around 8 a.m. Sunday.

Tom Bagley, a retired airport firefighter, was passing by the scene of the McLeod-Jenkins residence when he was shot and killed.

Bagley's daughter, Charlene Bagley, posted on Facebook that her dad had died trying to help others.

"This beautiful soul was taken from me so unnecessarily. I can't even comprehend it," she wrote.

"He died trying to help, which if you knew him, you knew that was just who he was all the time. I know he meant something to so many people."

Lillian Campbell Hyslop also lived in the Wentworth area. Her longtime walking partner and neighbour, Heather Matthews, has confirmed Hyslop was killed while out for a walk in the Wentworth Valley early Sunday morning.

By 10:04 a.m., the RCMP said the shooter had been spotted near Hidden Hilltop Family Campground in Glenholme, a popular local attraction best known for mini-putt and its soap slide.

A half-hour later, the police said the shooter had been seen further east in Debert, a small town of 1,300 that's home to a former Canadian Armed Forces base.

While the Mounties were telling locals about developments through Twitter, the force never sent out a message to the wider community using Alert Ready, Canada's emergency alerting system, which sends messages to Canadians through television, radio and LTE-connected cell phones.

Asked why the RCMP didn't use this system — which also sends out amber alerts in the event of a missing child — RCMP Commissioner Brenda Lucki said "there's always going to be a better way of doing things."

"I do say in any incident such as this, we always have to look back at what they did. Nobody can lose their life in vain," she said.

Nova Scotia Premier Stephen McNeil said Monday his government never received a request from the police to send out an alert.

The gunman, with his mock RCMP uniform and vehicle, began randomly pulling people over and killing them in their cars Sunday morning, police said. One of the victims was Kristen Beaton, a continuing care assistant with the Victorian Order of Nurses.

By 11:24 a.m., police confirmed the gunman had abandoned the RCMP-like vehicle he had been using — Leather later said the car was "no longer driveable" — and had commandeered a silver Chevy Tracker SUV from one of his victims.

While driving near Highway 102 — one of the province's main arteries — on Sunday morning, Shubenacadie resident Darcy Sack said she and her friend saw two police vehicles on fire near a silver vehicle.

She saw an officer run toward one of the burning vehicles as shots rang out, before seeing the shooter — still dressed like a police officer — in the silver SUV being chased by police.

One RCMP officer, Const. Heidi Stevenson, was killed while another, Chad Morrison, was injured after an encounter with the shooter.

By 11:40 a.m., police — exhausted after chasing the gunman for more than 12 hours — were on scene at an Irving Big Stop gas station near Enfield, N.S.

It is there, some 35 kilometres from Halifax, that the gunman died in a standoff with police. The circumstances of his death are now being investigated by the provincial Serious Incident Response Team (SIRT). 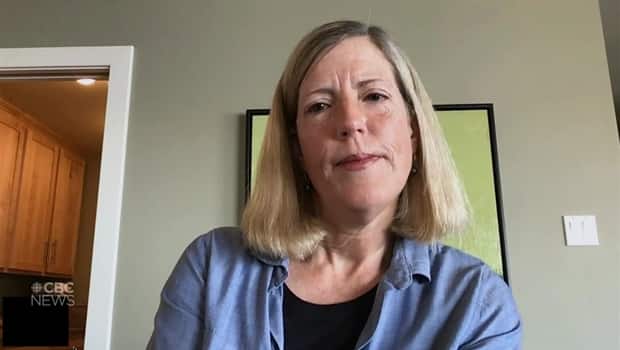 The police have been tight-lipped about what went on at each of the 16 different crime scenes the force has so far identified. The investigation is likely to take months to piece together as local RCMP detachments there wait for reinforcements from other parts of the country to help officers comb through a sprawling territory.

Leather said the number of dead could rise in the coming days as police sort through the five burned-out homes that the shooter left in his wake.

"There are so many places where the crimes took place, it's going to be a jigsaw puzzle," Zann said of the ongoing investigation. "It's heartbreaking for us here on the ground."

Karen Casey is the deputy premier of Nova Scotia and the MLA for the area. She said there likely will be more crime scenes identified in the days ahead.

"While we're in that time of uncertainty, the stress level is very high," she said.

"Nobody knows at this point what motivated the shooter ... that's for the investigation to try and unravel. There are many families whose lives are scarred and those scars will never heal."

With files from CBC Nova Scotia