Alberta Premier Rachel Notley says her government is only weeks away from finalizing a purchase of rail cars to move oil and help close massive price gaps that have short-changed government coffers and Canadian oil producers — and she wants the federal Liberal government to contribute financially to the plan.

'The federal government should be at the table on this. There’s no excuse for their absence,' Notley says

Alberta Premier Rachel Notley said today her government is only weeks away from finalizing a purchase of rail cars to move oil and help close massive price gaps that have short-changed government coffers and Canadian oil producers.

She also said she wants the federal Liberal government to contribute financially to the plan.

"We're not wasting any time," Notley told a Canadian Club luncheon in Ottawa Wednesday, formally announcing the rail car purchase. "Alberta's oil is going to flow one way or another — if not by pipelines, then by rail or by truck.

"Don't mistake me — this is not the long-term answer ... But until pipelines are built, we need to move more oil by rail."

Notley said her government will buy two new unit trains that can transport an additional 120,000 barrels a day, increasing the amount of oil being moved by rail in Canada by a third. Notley said she hopes to announce the final details of the purchase agreement by year's end.

Coca-Cola sells sugar-flavoured water for more. We are essentially giving our oil away for free.- Alberta Premier Rachel Notley

The amount of oil shipped on Canada's railways has reached record highs already, thanks to a bottleneck in pipeline capacity connecting Alberta's oilsands to foreign markets.

The leader of Alberta's United Conservative Party, Jason Kenney, said the rail car purchase might be useful in the "midterm" but does little to help immediately close the price gap "crisis" that has left the energy industry "reeling."

"In the dozens of meetings I've had with industry leaders over the last number of weeks, not a single one has raised the issue of the government buying rail cars," Kenney told reporters in Edmonton. "We don't have a year to wait at a $40 price differential. We have to take extraordinary action now." 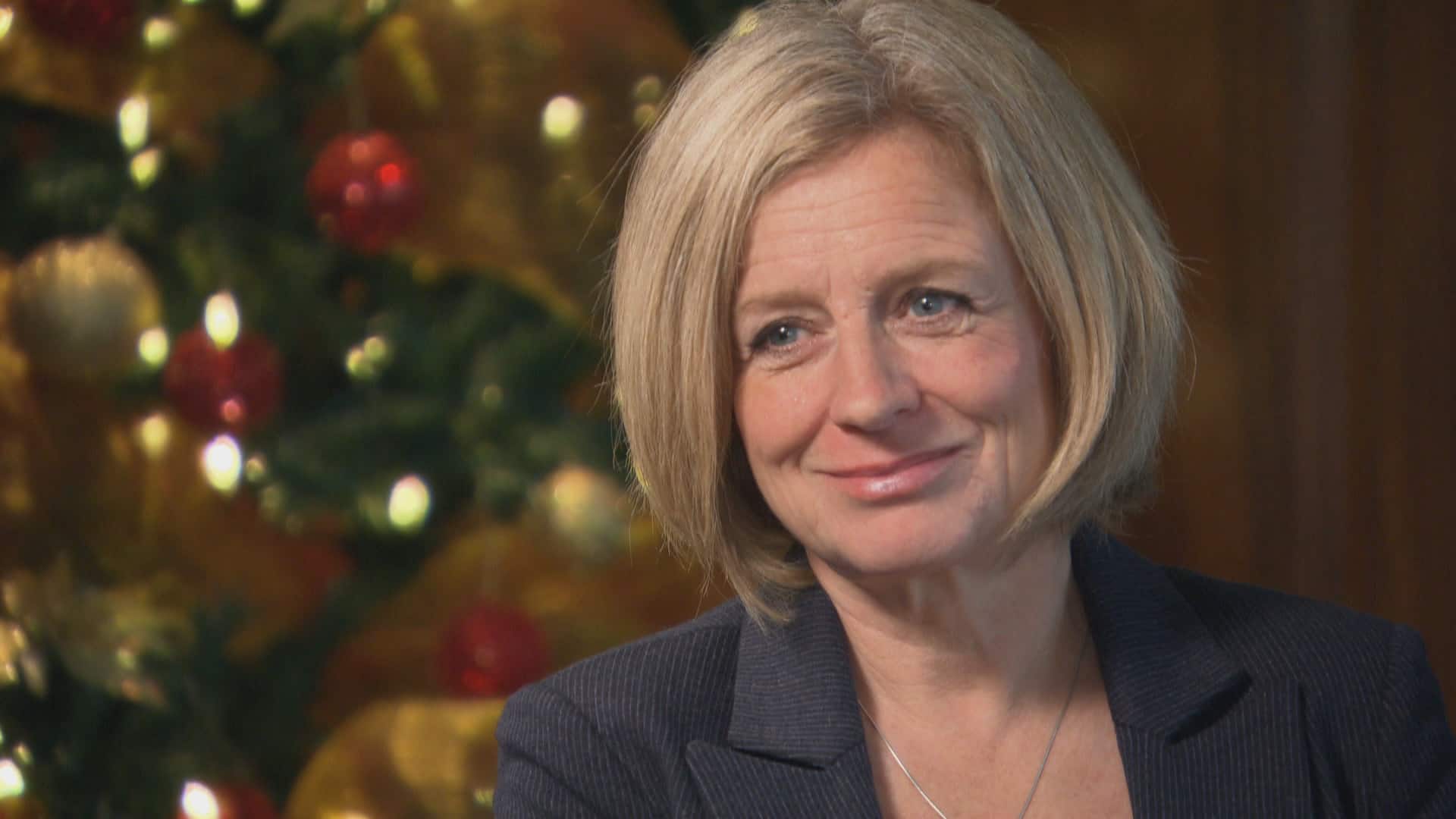 Notley on her plan to rescue record low oil prices

2 years agoVideo
10:58
Alberta Premier Rachel Notley says the province will buy rail cars to move more oil and she wants the federal government to chip in. The premier sat down with Power & Politics to discuss. 10:58

Instead, Kenney proposed Wednesday that the provincial government impose a "mandatory curtailment" on oil production — an even more aggressive step to shore up prices.

Kenney is pitching legislation that would force producers to cut total production by 10 per cent — the equivalent of 400,000 barrels of oil a day — to tighten supply and drive up prices.

"We are calling for a short-term, temporary measure that is well rooted in Alberta history, to save jobs and stop the giveaway of our greatest asset. It's time to act and end the fire sale of Alberta oil," said Kenney, a former federal Conservative minister.

Later, in an interview with CBC's Power & Politics, Notley said she would make a decision on whether to pursue mandatory production cuts — something that has been supported by major industry types like Cenovus CEO Alex Pourbaix, who first floated the idea — in a week's time.

"We haven't made a final decision on the curtailment issue," Notley said, saying the rail car purchase does not prevent further legislative action.

Crude-by-rail at an all-time high

Canada transports several types of crude oil by rail to various destinations throughout North America. Most of it is shipped to refineries on the U.S. Gulf Coast, where Canadian producers can fetch prices closer to the going 'world' rate, rather than the discounted rate offered by refineries in the U.S. Midwest.

While shipping crude by rail is typically far more expensive than transport by pipeline, it's a flexible alternative for producers facing a dearth of pipeline space.

With the Trans Mountain expansion stalled and the Northern Gateway project shelved, Alberta's producers have been forced to accept prices far below world levels for their oil.

Ninety-nine per cent of Canada's oil exports are destined for the U.S. American refineries have been offering lower prices for that oil, knowing that Alberta producers have few options and are desperate to unload excess product.

Western Canadian Select, which includes product from the oilsands, trades at just $11.56 US — less than a quarter of the $51.49 that West Texas Intermediate (WTI), the U.S. gold standard, fetches on the open market. (These prices were current as of Wednesday.)

"Coca-Cola sells sugar-flavoured water for more. We are essentially giving our oil away for free," Notley said.

This price gap is costing the Canadian economy roughly $80 million a day, she said.

Notley said that while Prime Minister Justin Trudeau and the federal Liberals should be commended for buying the Trans Mountain project in a period of investor uncertainty, Ottawa now needs to partner with Alberta by helping to finance the rail car purchase.

"The federal government should be at the table on this. There's no excuse for their absence. Either way, we will not allow delays to continue," she said. 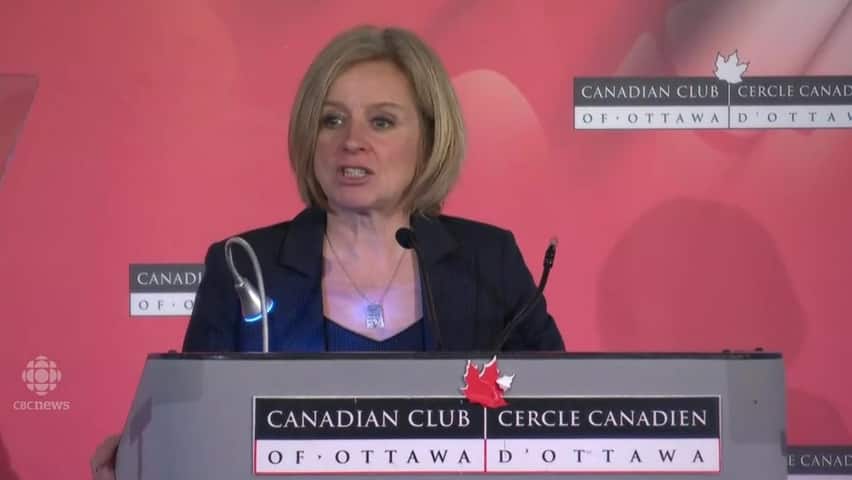 2 years agoVideo
1:53
Alberta Premier Rachel Notley delivers a speech in Ottawa where she outlines a provincial plan to buy railcars to ship oil while the Trans Mountain pipeline expansion waits in limbo. 1:53

When asked Wednesday whether she has received any indication from Ottawa that it's willing to help pay for the rail cars, Notley said the federal government has not yet formally responded to her request.

Notley said she has seen some media reports suggesting Ottawa prefers waiting for Enbridge's Line 3 to come on line (the earliest start-up date would be some time in 2019) to investing in more rail cars. She said that's the wrong approach.

"Our officials are still in good discussions," she said. "Line 3 cannot, on its own, clear the market for more than a few months."

Notley is not scheduled to meet with Trudeau or Finance Minister Bill Morneau during her swing through the nation's capital this week.

A spokesperson for Natural Resources Minister Amarjeet Sohi said the federal government is committed to "relieving the pain felt by so many" in Alberta due to the growing price differential.

"We are focused on ensuring that every barrel of Alberta oil gets its full value. That is why our government has made addressing this national issue — and increasing market access in general — an urgent priority," the spokesperson said in a statement to CBC News, pointing to Ottawa's support for the Keystone XL and Line 3 pipelines.

The spokesperson said Ottawa is "analyzing options, including the oil by rail proposal that we have recently received from the Alberta government."

Notley said Alberta would go forward with the purchase even if the federal government decides not to help.

She said the additional oil-by-rail capacity would narrow the price gap by about $4 a barrel, generating an additional $1 million a day in federal revenue — suggesting the purchase price would be "fully recouped" through increased royalties and by selling shipping capacity to producers.