No plans to end restrictions on prohibited guns, Harper says

Prime Minister Stephen Harper is distancing his government from recommendations made by its federal firearms advisory committee to loosen restrictions on guns, saying he has no plans to eliminate the prohibited weapons list. 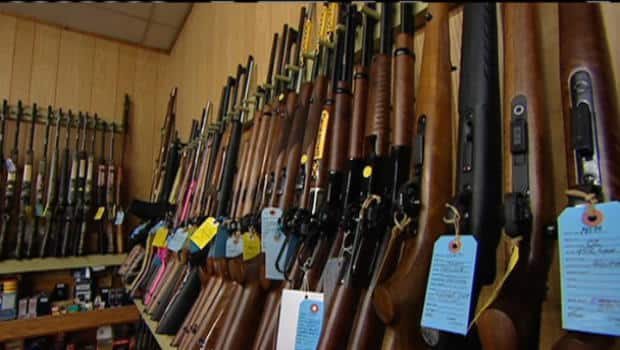 8 years agoVideo
2:31
Prime Minister Stephen Harper is distancing his government from recommendations made by an influential federal firearms advisory committee to further loosen restrictions on guns 2:31

Prime Minister Stephen Harper is distancing his government from recommendations made by an influential federal firearms advisory committee to further loosen restrictions on guns, including some prohibited weapons.

He was responding to a Toronto Star report that said the Conservatives were looking at the proposals, which include reclassifying "prohibited" firearms such as certain handguns and assault weapons as "restricted," and extending the duration of gun-owner licences from five to 10 years.

Harper said emphatically in the House of Commons during question period Thursday that the government has no plans to eliminate the prohibited weapons list.

"I am aware of the [Star] story and let me be as clear as I can be: prohibited weapons exist as a category under the law for essential reasons of public security. The government has absolutely no intention of weakening that category of protections," Harper said in answer to a question from Opposition Leader Tom Mulcair.

Before question period, interim Liberal Leader Bob Rae said it was regrettable the advisory group was recommending a loosening of restrictions on firearms, and said the government must listen to "lots of different people: Chiefs of police, the suicide prevention groups, the domestic violence groups."

"When you look at your advisory groups and who you're going to be consulting with there's a whole range of people you have to consult with, some of whom will take positions that are against the government's and I think that's something they have to recognize is the case," Rae told reporters before question period.

After Rae raised similar points in the House of Commons, Harper again distanced himself from the advisory group's recommendations.

"I just want to emphasize that the positions in this report do not reflect the positions of the government. I will take the advice of the leader of the Liberal Party under consideration. I'm obviously very concerned with some of the recommendations made in that report and I think the committee does need some re-examination in that light."

The Canadian Association of Chiefs of Police told CBC News it was "encouraged by the prime minister's response."

"There is a need for a constructive dialogue on this issue, in which the public should engage. The CACP's stand on gun control is well known and has been stated many times," the CACP said in an email. "Our priority, as always, is the public safety of Canadians. In that light, we have obvious concerns which we look forward to discussing directly with decision makers in government."

Before question period, MPs from all parties read statements condemning violence against women and marking the 23rd anniversary of the Dec. 6, 1989, shooting at Montreal's l'Ecole Polytechnique that left 14 women dead.

MPs also stood and observed a minute of silence in the Commons. Flags on all federal government buildings, including the Peace Tower on Parliament Hill, flew at half-mast from sunrise to sunset Thursday to observe the National Day of Remembrance and Action on Violence Against Women.

The parliamentary secretary to the veterans affairs minister made the comments while sharing her thoughts about the Ecole Polytechnique massacre.

"This has nothing to do with violence against women," Adams said as she left the House of Commons.

"Men will perpetrate violence against women with guns, with hatred, with ignorance," she said.

"And that really is what we need to clamp down on as an entire country."