Citizenship and Immigration Minister Chris Alexander is introducing sweeping changes today in what the Canadian government is calling "the first comprehensive reform to the Citizenship Act in more than a generation." 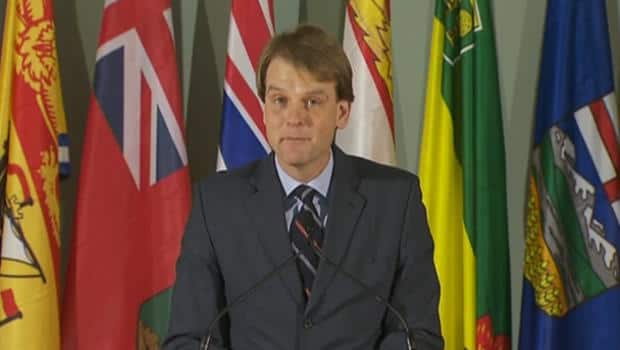 7 years agoVideo
2:08
Would-be citizens would have to live in Canada longer before applying for citizenship, but would see their applications for citizenship processed more quickly 2:08

The Canadian government is proposing sweeping changes today in what is being called "the first comprehensive reform to the Citizenship Act in more than a generation​."

Under the Conservative government's Bill C-24, dubbed the Strengthening Canadian Citizenship Act, would-be citizens would have to live in Canada longer before applying for citizenship but would see their applications for citizenship processed more quickly.

"Citizenship is not a right; it is a privilege," Citizenship and Immigration Minister Chris Alexander told reporters gathered at a news conference in Toronto after the bill was tabled in Parliament.

Permanent residents applying for citizenship would have to live in Canada for four years out of the last six years, instead of the current three years out of four.

Adults who apply for citizenship will also have to show they have filed Canadian income taxes.

Those age 14 to 64 would have to meet official language requirements and pass a citizenship test. Only those who are 18 to 54 have to meet those criteria now.

The proposed legislation would streamline the application process by allowing citizenship officers to make decisions on applications, something only citizenship judges can do now.

Alexander said this would help to reduce the backlog, which currently stands at 320,000 applications. The government hopes to reduce the wait time of two to three years to less than a year by 2015-16.

"The biggest change is clarity. For the first time, there's a definition of residence in the law," Kurland told CBC News on Thursday.

The proposed bill would also:

As Alexander told CBC News in an interview last month, the issue of "birth tourism" or "passport babies" is not addressed in this bill.

"It will be addressed down the road in an appropriate way. It does involve consultation and co-ordination with the provinces and territories," Alexander told reporters in Toronto today.

The proposed legislation would give the immigration minister the power to revoke a person's citizenship for acts against Canada.

The Canadian Security Intelligence Service said on Monday the agency is aware of more than 130 Canadians working abroad in support of extremist activities.

Under this bill, the government would have the power to strip Canadian citizenship from dual nationals "who were members of an armed force or an organized armed group engaged in armed conflict with Canada."

The government would also have the ability to revoke citizenship from those who has been "convicted of terrorism, high treason, treason, or spying offences, depending on the sentence received."

The immigration minister would have the final say in decisions to revoke citizenship, not the governor in council, as is the case now.

Complex cases such as "war crimes, crimes against humanity, security, and other human or international rights violations" would be decided by the Federal Court.

Cracking down on fraud

The new legislation would also look to regulate immigration consultants in an effort "to hold them to higher professional and ethical standards."

The bill would make it an offence for unauthorized individuals to represent or advise a person on a citizenship application or citizenship hearing for a fee.

In an effort to crack down on citizenship fraud, the government would increase the fines and penalties for anyone misrepresenting themselves as a paid immigration consultant with a fine of $100,000 and/or up to two years in prison.

The proposed new penalty for individuals who commit a fraud offence would run up to a maximum of $100,000 and/or five years in prison.

While the government implemented some changes in 2009 to restore citizenship to people who had lost it or had never received it due to outdated legislation, according to the government, a small number of people were still not eligible to receive it.

Under the proposed changes, the government would "retroactively" give citizenship to Canadians who have not been able to receive it for one reason or another over the years.

Citizenship would be extended to the so-called Lost Canadians born before 1947 as well as to their first-generation children born abroad.

The bill would give citizenship to individuals who were born or naturalized in Canada, as well as to any British person residing in Canada prior to Jan. 1, 1947, or April 1, 1949, in the case of Newfoundland.

The changes would also apply to the children of these "Lost Canadians."

Jackie Scott, one of hundreds of "Lost Canadians," told CBC News on Thursday she was moved to tears when she first read the proposed bill.

"At first reading … it caught me crying," she said from her home in Arizona.

Scott, who is fighting the federal government in court for the right to be able to say that she is legally a Canadian citizen, said the bill does not appear to close all the loopholes.

Scott was born out of wedlock to a Canadian father who served as a soldier in the Second World War and a British mother.

Although she was raised in Canada by her dad, Scott found out about 10 years ago that she was not officially a Canadian citizen.

The opposition parties had mixed reaction to the new government bill, welcoming some of the much sought after changes while expressing reservations with some of the more controversial aspects of it.

NDP immigration critic Lysanne Blanchette-Lamothe told CBC News the New Democrats were happy to see the government is ready to address the issue of "Lost Canadians."

On the other hand, she said, the NDP does have some concerns with the proposed changes that would give the immigration minister the power to revoke citizenship. "We want to make sure, for example, that it does respect the Charter of Rights and Freedoms."

Liberal immigration critic John McCallum told CBC News he was skeptical about the government's promise to reduce the processing time from upwards of 36 months to under a year, in time for an election year.

"Given their record on waiting times, which have all ballooned ... I have a hard time believing that. We'll see."