NDP Leader Jagmeet Singh says appealing to young voters and speaking to them where they are has been a key part of his campaign strategy.

NDP Leader Jagmeet Singh had one question for two young women asking for a selfie with him earlier this month: "Yo, you hear the word?"

It was a sunny day in downtown Toronto and Singh was greeting voters while strolling along sidewalks  what political parties call "mainstreeting" — and Singh was sunny about one of his latest Instagram followers.

The girls immediately gave him high-fives and asked Singh if the singer might hook him up with some her designer label merchandise.

The moment provided Singh a unique opportunity to chat with two young voters who otherwise might not have given him much time.

Singh has made it a priority to try to connect with young voters through this campaign, using tools and strategies other political leaders either can't or have chosen not to try.

Take, for example, his posts on TikTok  one of the world's fastest growing social media apps. 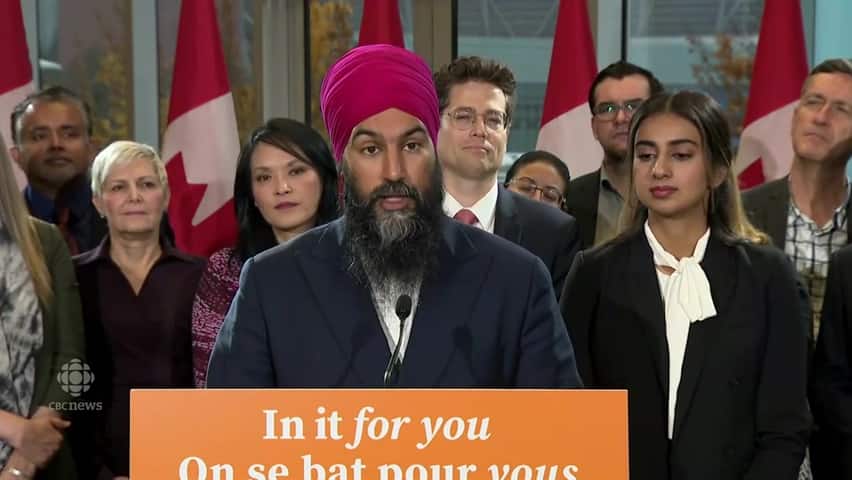 1 year ago
0:47
NDP Leader Jagmeet Singh says during the campaign he has focused on reaching out to youth voters on different platforms. 0:47

Earlier this week, Singh said the TikTok videos were a way to "show what I'm for, who we're in it for as a team," before adding it was a "cool way" to share his campaign message.

On Sunday, the New Democrat leader said young voters have told him they often feel ignored by political parties and by government decision-makers.

That's why Singh said he has made it a big part of his campaign to reach out to younger voters in ways that are relevant to them, and on platforms they regularly use.

"One of the things I've realized throughout the campaign and throughout my life is that you've got to speak to people where they are," he said on the eve of his first general election as a federal leader.

"Wherever they are, if you can speak to them and find them and you have a message that can actually make their life better, then use that platform."

With polls suggesting a possible minority government after Monday's election result, motivating people who often don't vote, such as young people, is a priority for all parties — but maybe most important for the NDP.

Four years ago, turnout from the youngest cohort of voters was up 12 per cent from the 2011 federal election. Many of these new, young voters cast their ballots for Liberal Leader Justin Trudeau, and the youth vote was credited with giving the party its majority government.

Recent polls suggest Singh's efforts to pull some of that youth support in his favour may be working, with the NDP first or second choice among the youngest cohort of eligible voters.

But it's not just young people taking a second look at the NDP.

Like other leaders, Singh saw crowds at his rallies get progressively larger and more boisterous as the final week of the
campaign unfolded — gaining momentum parties crave in the homestretch — aided by strong debate performances and a strategic ground campaign targeted at vote-rich ridings in Quebec, B.C. and the 905 region around Toronto.

Many pundits were writing the party's obituary at the start of the campaign, wondering whether it would even retain official party status after the vote.

Singh chuckled when asked about the shift in narrative from the start of the campaign last month.

"That's something that I've dealt with my whole life," Singh said Sunday.

"I also know that a lot of Canadians go through that. They face barriers, or they face naysayers based on who they are, based on their sexuality, their gender, the colour of their skin, the way they look, and they're told that they can't achieve things.

Singh will find out Monday whether his party can translate momentum and his populist appeal into votes and, most importantly, seats. Singh has asked voters to send enough New Democrats to Ottawa to ensure their voices are heard by whoever is in power, and reiterated Sunday he might work with any party in a minority Parliament — just not the Conservatives.

Singh opted for a light schedule for the final day of campaigning Sunday. The NDP leader had only three events, all in the Vancouver area, and wrapped things up by mid-afternoon — a stark difference from Trudeau and Conservative Leader Andrew Scheer, who spent Sunday feverishly whistle-stopping in multiple ridings in battleground B.C.

Singh dismissed the suggestion his schedule was motivated by financial constraints, saying in French that his campaign still had lots of energy and had made clear the NDP was the party of choice for progressive voters, including in Quebec, where the party is trying to hold on to seats.

He said his focus has remained on selling his message to Canadians that his is the party of hope, while the Liberals and Conservatives have been busy telling voters to "settle for less."

"We've made a really clear message to Canadians that they can choose to vote for hope, that they don't have to fall into the discussion or argument about who is worse for Canada and we are giving Canadians a real option here," Singh said.

A short while later, he headed out on to the sidewalk to shake hands and pose for selfies, hoping to connect with more voters.