The NDP policy convention kicked Friday in Ottawa, with several topics on the agenda.

As the #MeToo movement continues to rock Canadian politics, NDP president Marit Stiles offered delegates at the party's national convention Friday a public apology for how the party has handled harassment allegations in the recent past.

In the wake of allegations against former NDP MP Peter Stoffer and Saskatchewan NDP MP Erin Weir, Stiles told members that the party's harassment policy has failed too many women in its ranks. 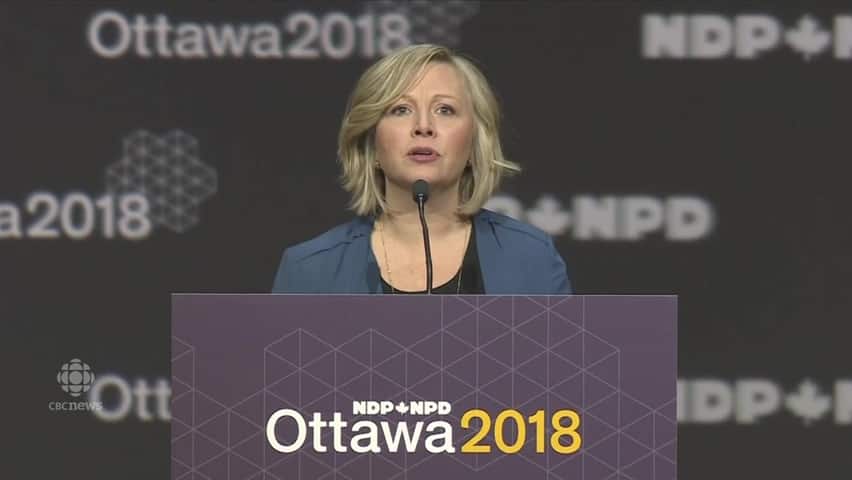 3 years ago
1:09
Marit Stiles started the NDP policy convention in Ottawa Friday with this apology 1:09

"There are women within our party — volunteers, staff, MPs — who have survived unacceptable and unwelcome behaviour from peers and people who wield power over them," Stiles told some 2,000 delegates gathered at a convention centre a stone's throw from Parliament Hill.

"We've all been shaken by incidents of harassment and inappropriate behaviour. We have failed and we apologize."

Stoffer, a popular Nova Scotia MP whose defeat in the 2015 election was met with shock among the party faithful, has been accused by several women of inappropriate behaviour. He apologized last week but insisted he has never physically or sexually abused anyone.

NDP Leader Jagmeet Singh recently ordered a third-party investigation of Weir and suspended him from party duties after fellow caucus member Christine Moore sent an email to caucus alleging that multiple women — including party staff — had told her Weir had harassed them. No specific allegations have been brought against him.

It's not just the NDP's handling of harassment that is testing party unity this weekend. Delegates are also again confronting the Leap Manifesto, a controversial policy document developed by a nominally non-partisan group of environmentalists who are demanding a radical rethink of the country's energy mix in order to halt climate change.

Leap Manifesto up for debate

Supporters of the manifesto were at the forefront of the push to dump former federal leader Thomas Mulcair, who lost a leadership review at the party's convention in 2016.

Backers of the manifesto, including prominent left-wing activists like author Naomi Klein and broadcaster Avi Lewis, have called for an end to all pipeline development and work in the "extractive" industries like oil and gas and mining — a proposition exceedingly difficult for many New Democrats from Alberta to stomach.

"I think its fair to say that [Alberta Premier] Rachel Notley is not a fan of the Leap Manifesto," Lewis said in an interview with CBC News.

Lewis said he believes many New Democrats want the party to adopt the manifesto. Some riding associations have gone as far as sponsoring motions from the manifesto to be debated at the convention.

"At the grassroots there is clearly a huge appetite for more transformative policy demands in the NDP," Lewis said.

While Leap organizers were present at the fateful Edmonton 2016 convention that resulted in Mulcair's departure, this year they decided not to get involved in the convention itself, opting instead to promote the manifesto at a separate event at the Canadian Museum of Nature before the convention kickoff.

The manifesto also calls for higher taxes on companies, a universal basic income and cuts to military spending.

Nearly half of the 300 people who attended the Leap event raised their hands when asked who was attending the convention. Singh himself was not in attendance.

On Friday evening, delegates backed a number of resolutions relating to the environment, including a call to enshrine environmental rights in law, to pursue a "full and rapid transition" to zero emission vehicles and to cut subsidies to non-renewable energy projects.

Delegates also were presented with a grave assessment of the party's finances, undermined by a precipitous decline in fundraising since the last federal election that has seen the NDP's budget fall from $18 million in 2015 to $6 million the last two years.

The trend is starting to reverse, said NDP treasurer Tania Jarzebiak, but the party still has $3 million in external debt from the last election and owes money to many riding associations that will need the cash soon to start preparing for 2019.

There was some good news: The number of party members has blossomed from a low of 41,000 in March 2017 to 124,000 in August, thanks in large part to the leadership campaign that ultimately elected Singh.