The admiral who is about to become the military's second in command delivered a harsh critique of political and bureaucratic indecision, and how it has affected the navy.

In speech that clearly serves as warning for the Trudeau government, the incoming deputy commander of the Canadian military delivered a harsh critique of political and bureaucratic indecision and its harm for the navy.

Vice-Admiral Mark Norman stepped down as commander of the navy on Thursday and will take up the post of the vice-chief of the defence staff later this summer.

His shot across the Liberal government's bow lamented the deterioration of the navy's size and combat power and the inability of the system to deliver replacement ships during his three-year tenure.

Over the last few years, age and mechanical reliability forced the military to retire its two supply ships and two command destroyers — which also provide anti-aircraft defence for the fleet. In both cases, new ships are still on the drawing board.

"It's important to keep in mind that the situation we had to manage was completely avoidable," said Norman.

"It should act as a powerful reminder of what happens when we allow ourselves to continually manage risk by putting off tough decisions in the interest of short-term expediency."​

Norman was referring to the previous Conservative government's decision to scrap a program to replace the navy's supply ships and the foot-dragging that has plagued the frigate-replacement program. But Norman's comments Thursday could also be applied to the Trudeau government's political gyrations over replacing the air force's CF-18s.

Norman reflects on the state of the Navy

4 years ago
1:34
Vice-Admiral Mark Norman the out going Chief of the Navy reflects on the state of the fleet 1:34

Lessons for the CF-18 debate

The Liberals committed in the last election to holding an open competition to replace the fighter jets, but have now waffled. One option under consideration is a sole-source purchase of Boeing Super Hornet fighters as an "interim" measure — something that would solve a political problem for the Liberals who promised not to buy the F-35 stealth fighter under any circumstances.

With Defence Minister Harjit Sajjan in the audience, Norman painted a stark picture of how political gamesmanship has hobbled the navy.

"The RCN has gotten noticeably smaller — both in terms of fleet and establishment — on my watch," he told the change of command ceremony, which ushered in his successor, Vice Admiral Ron Lloyd.

"There's about a 20 per cent reduction in the float capacity of the fleet, with acute losses in war-fighting capabilities, in particular in area air defence and sustainment. As well, we've seen alarming reductions in both our establishment and effective strength."

Norman described the absence of supply ships, which refuel and resupply warships at sea, as a gap that needed to be closed. Without them, the Canadian navy cannot assemble fleet task forces and must send frigates to sea individually.

With replacements still years away, the Harper government gave the green light last year to leasing a converted cargo ship for a few years.

Norman's speech wasn't all serious. It was punctuated with moments of self-deprecating humour, which included asking the military band to replay O Canada because the audience seemed to mumble and whisper their way through the lyrics.

"Now, don't you feel better?" he asked after the second rendition. "I thought I was at a funeral there for a moment."

Lloyd, who served as Norman's deputy, backed his old boss's critical policy assessment, saying you can't slip a piece of paper between their views.

"The decisions that he has made, I've fully supported," Lloyd said following the ceremony. "I've been privileged enough to actually provide advice on some of those decisions and I share his assessment."

The Liberals recently retooled the national shipbuilding strategy, promising to hire more staff to shepherd projects through the complex system, and offered up a streamlined process for delivering the navy's replacement frigates.

Norman gave a nod to those measures, but said more needed to be done.

"Although it's progressing, shipbuilding is still mired in process," he said. "Delays and criticism have cast an unnecessarily dark shadow on what should be a cause for national enthusiasm and optimism."

Lloyd, who served as a fleet commander on both coasts, will have his own set of tough decisions. It will be up to him to guide the frigate replacements, which could cost upward of $40 billion to construct, through government approval. In addition, he'll have to convince the Liberals to give the oft-maligned submarine fleet a facelift.

The country's top military commander, Gen. Jonathan Vance, was a junior classmate to Lloyd in the early 1980s and remarked how the new navy commander used to pull rank and force him to do push-ups when they were cadets.

The tables were turned Thursday, where Vance jokingly had Lloyd doing them in front of the cameras. 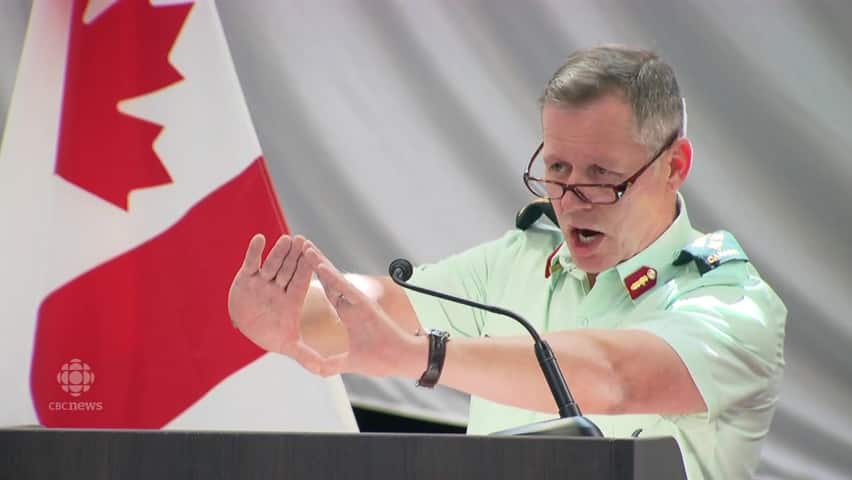