U.S. wants to scrap dispute mechanism, but it's 'nothing close to tearing up' the 3-way trade deal

Not long ago, U.S. presidential candidate Donald Trump was trashing the North America Free Trade Agreement, threatening to "rip up" the whole "one-sided" deal once he got to the White House.

Instead, the NAFTA's new objectives under the Trump administration — offered in an 18-page summary released  Monday by the U.S. Trade Representative's Office — are surprisingly tame, according to international trade and customs experts.

They see as downright sensible the U.S. proposals calling for regulatory co-operation, the addition of a chapter to address the digital economy, raising the duty-free spending limit for Canadians, and even the scrapping of a dispute resolution mechanism.

"This is nothing close to tearing up the NAFTA," said Daniel Ujczo, an international trade lawyer who focuses on Canada-U.S. matters.

That ought to be a relief to Canada and Mexico, the other parties in the three-way deal, after charm offensives by both nations to preserve it. Officials from all three countries will meet in Washington Tuesday to review the negotiation objectives.

"It doesn't throw a lot of red meat for the protectionist crowd," Ujczo said, calling the notice a "well-balanced approach to the modernization" of a pact that came into force 23 years ago, before the ubiquity of the internet.

For example, references to digital trading of goods and services, as well as full integration of labour and environmental standards into NAFTA — as opposed to making them "side agreements" — are provisions similar to what was negotiated in the TPP, a deal that Trump had disparaged.

In a statement, Senator Ron Wyden, a Democrat, called out the administration for "planning to come to the table with watered-down versions of TPP proposals," which he notes the president once said "was a bad agreement."

"The overall impression to be gleaned is not much is new," said Chi Carmody, the Canadian national director of the Canada – United States Law Institute at Western University in London, Ont.

"In the campaign, it was, 'We're going to do away with NAFTA,' and then Trump gets into office, and it was, 'Oh, we're going to renegotiate NAFTA,' Carmody said.

"And now, the renegotiation is more taking on the complexion of an updating. It's more expanding it than contracting it, which was the original bogeyman that Trump had floated in front of us."

To be sure, the top objective listed in Lighthizer's document mentions the need to "improve the U.S. trade balance and reduce the trade deficit with the NAFTA countries."

But there are no binding timelines or numbers stated on the wish list beyond this passing reference to "truly fair trade."

The U.S. trade deficit on goods with Mexico was $63.2 billion last year.

What we see in this document is a very trade law orthodox document.- Laura Dawson, the director for the Canada Institute at the Wilson Centre

Trump's biggest gift to Canadian consumers is lifting the so-called "de minimis" rate, raising the amount that can be shipped to Canada to $800 from $20 before online shoppers get dinged for duties. It would help promote the free flow of trade by popular services like Amazon or eBay.

But if that's a treat for Canadians, Ujczo said "the most specific negative aspect" is a section on trade remedies that calls for eliminating Chapter 19, the vehicle for resolving disputes over underpriced "dumping" of goods and countervailing duty claims.

That's been a big issue with respect to wheat, beef and pork products, and the binational panels have ruled in favour of Canada. Chapter 19 has also been used successfully by Canada in the long-running softwood lumber dispute.

Ujczo said Congress, which gets to approve the Trump administration's trade objectives before they can be negotiated, has long had Chapter 19 in its crosshairs. The U.S. trade czar's blueprint, however, still leaves open the door to "create new procedures" for resolving disputes at a later date.

In that respect, getting rid of Chapter 19 is nothing surprising, though Barry Appleton, an international trade attorney who advised the Ontario Cabinet Committee on North American Free Trade as the NAFTA was being negotiated, said the mechanism "was never really functioning very well anyways."

Canada's supply management dairy and poultry policies, an irritant for the U.S., were not expressly targeted. But there was a coded mention in a section on agriculture that the administration would "seek to eliminate non-tariff barriers to U.S. agricultural exports."

Western University's Carmody said his sense is that the U.S. "appreciates the political sensitivity" of supply management in Canada, but "didn't want to get involved in a long, drawn-out struggle on this issue that might torpedo the negotiations."

This way, he said, the Trump administration would be able to claim success in the negotiations when Republicans face the U.S. electorate in midterms next year.

There's also nothing controversial about tightening "country of origin" requirements, rules that spell out how much regional NAFTA-made content a product must contain to be tariff-free.

That was something Carmody said was an early worry for major automakers with plants in all three NAFTA countries. But the relevant language in the U.S. outline is "fairly weak," he said, only mentioning vaguely that U.S. negotiatiors will want to "update and strengthen the rules of origin, as necessary."

Laura Dawson, the director for the Canada Institute at the Wilson Centre think-tank in Washington, D.C., said her initial take on reviewing the broad NAFTA renegotiation points was "a sense of relief."

"The rhetoric and the reality, they come from two very different camps," she said. "The rhetoric was very politicized. What we see in this document is a very trade-law-orthodox document."

It's also just a beginning. With the objectives now published and a meeting scheduled to review them in Washington on Tuesday, the table is set for formal negotiations to begin as early as mid-August. 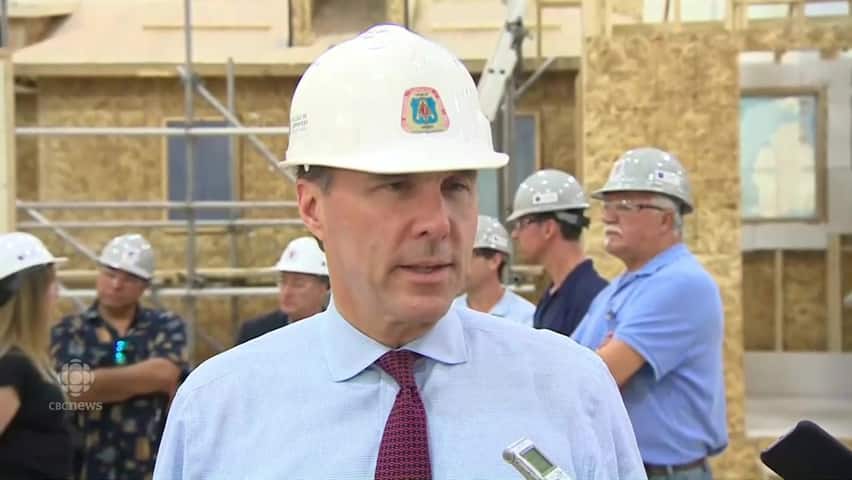 4 years ago
1:08
Finance Minister Bill Morneau speaks in Vaughan ahead of the US releasing its plans for the NAFTA renegotiations 1:08

With files from CBC's Lyndsay Duncombe