Foreign Affairs Minister Chrystia Freeland says North American Free Trade Agreement negotiations were moving at an intense pace as her team continues to hammer out a revised deal in Washington before the end of the week.

'We continue to be encouraged by the constructive atmosphere,' Freeland says

North American Free Trade Agreement negotiations will resume Friday morning, as Canada's team continues to hammer out a revised deal in Washington before the end of the week.

Foreign Affairs Minister Chrystia Freeland met U.S. Trade Representative Robert Lighthizer a total of four times Thursday, including a meeting late in the evening that lasted less than five minutes. She told reporters she "had a couple of things to say."

Earlier Thursday, Freeland and Lighthizer held the longest negotiating sessions since she arrived in Washington Tuesday.

Also earlier, Canada's high-ranking negotiators brought the provinces and territories up to speed on the state of the negotiations.

Trudeau "indicated that the federal government remains committed to ensuring that any agreement is in the best interests of Canadians," said spokesperson Eleanore Catenaro in a statement.

"We are at a very delicate moment, obviously, at the negotiations, and the first thing we agreed upon is that we would not comment on, we would not issue any comment on what we discussed and what we heard," Quebec Premier Philippe Couillard told reporters.

But the premier, who is up for re-election in October, said he "forcefully" made Quebec's position known on supply management, cultural exceptions and dispute resolution mechanisms.

The United States, Canada and Mexico are trying to come up with at least a preliminary agreement in principle by Friday.

"We continue to be encouraged by the constructive atmosphere," Freeland said. "There's a lot we're trying to do in a short period of time."

Finalizing something before the end of day on Friday sets up a scenario where a potential deal could be signed before a new political party assumes power in Mexico later this fall. There may be other ways for Canada to conclude a NAFTA deal, however, if this renewed push is not successful over the next 36 hours or so.

On Monday, the Trump administration announced that it had reached a preliminary agreement with Mexico.

When asked if Mexico would be returning to the table, Freeland said "we are focused on working hard on our issues with the United States." 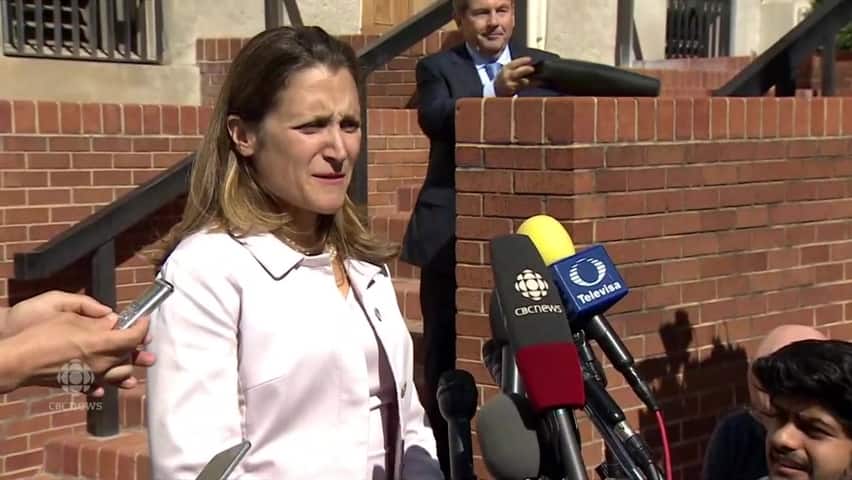 Jim Carr, Canada's minister of International Trade Diversification, said Friday in Singapore that Canada, the United States and Mexico are working to "get the right deal, not any deal," and there were risks to all if no agreement could be reached.

Canadian Labour Congress President Hassan Youssef, who is in Washington this week, said there is room for Canada to make concessions on dispute resolution and supply management.

Chapter 11 was designed to give investors confidence when they do business in another country by providing an impartial tribunal to settle disputes with the government over allegations of discriminatory treatment. The Trump administration wants to make participation voluntary.

"I've said to the government; there's no reason to even keep Chapter 11, we have a very robust judicial system in Canada. Should any investor choose to sue a provincial, territorial government or the federal government they can go to our courts," said Youssef, who also sits on the government's NAFTA council.

"The Canadian public should expect the American dairy industry will probably have more access to Canada by the time this agreement is concluded and we should not lose sleep over it," he said.

"Absolutely not," said Freeland when asked if a Federal Court of Appeal decision adds pressure to her work in Washington.

In a decision released Thursday, the Federal Court of Appeal found the National Energy Board's assessment of the Trans Mountain project was flawed and the federal cabinet should not have relied on it when it gave final approval to proceed in November 2016.

"The NAFTA negotiation is, as I think you all know, an extremely important negotiation for Canada," ​Freeland told reporters during a pause between meetings Thursday.

"We have our eyes resolutely on that prize and we are not focusing on or responding to any other factors."

With files from the CBC's Janyce McGregor, Katie Simpson, The Associated Press and Reuters