Canada has signed a new agreement updating the North American free trade agreement with Mexico and the United States, clearing the way for the contentious pact's long-awaited ratification.

'This is a day we've all been working to,' says U.S. House Speaker Nancy Pelosi

Canada has signed a new agreement updating the North American free trade agreement with Mexico and the United States, clearing the way for the contentious pact's long-awaited ratification.

Deputy Prime Minister Chrystia Freeland travelled to Mexico City for the signing ceremony today following a last-minute flurry of conversations between the three countries to address lingering issues with the deal.

"This has been a long arduous and, at times, fraught negotiation. We made it to the finish line because we learned how to work together," said Freeland during her remarks. 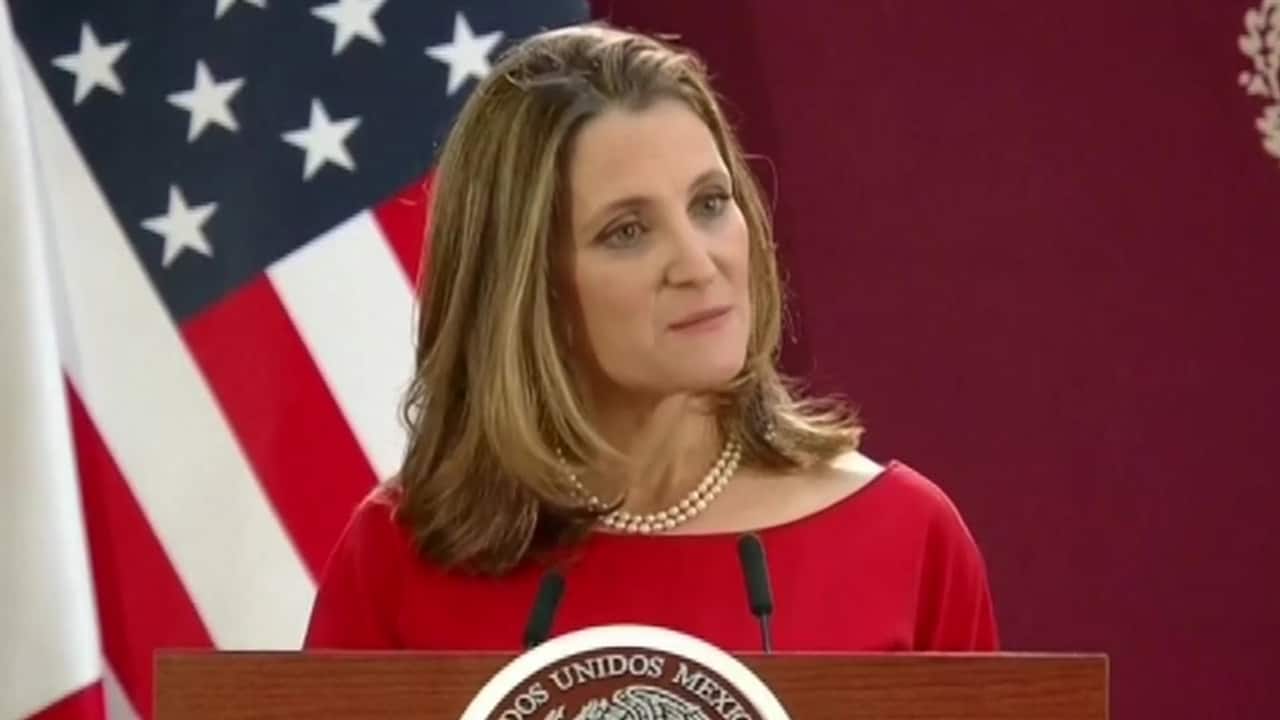 "Today Canada, the United States and Mexico have agreed to improvements of the new NAFTA that strengthen state-to-state dispute settlement, labour protection, environmental protection, intellectual property, the automotive rules of origin, and will help to keep the most advanced medicines affordable for Canadians."

Speaking to reporters after the official signing ceremony, Freeland said the amended deal was good for the whole country. But she singled out Quebec's aluminum industry as one that will benefit.

The revised deal requires that 70 per cent of the aluminum in all North American cars come from NAFTA countries, with Quebec being the primary producer of the metal within the three countries.

"These amendments will make the new NAFTA even better," Freeland said. "All three countries found a way to work productively and collaboratively together for the common prosperity of all of our people. And we achieved together a win, win, win, outcome."

Freeland said that every single one of the last-minute amendments that were agreed upon are in Canada's national interest.

The Canadian government released "a summary of revised outcomes" late Tuesday, but the official full text that Freeland signed on Canada's behalf in Mexico City has not yet been released.

After months of delays, U.S. House Speaker Nancy Pelosi endorsed the renegotiated deal on Tuesday, saying progress has been made on the Democrats' main areas of concerns: workers' rights, the environment and prescription drug prices.

At a media conference Tuesday morning, the California Democrat called the revised trade deal "infinitely better" than the original text.

"This is a day we've all been working to, and working for on the path to yes," said Pelosi. "There is no question, of course, that this trade agreement is much better than NAFTA, but in terms of our work here, it is infinitely better than what was initially proposed by the administration." 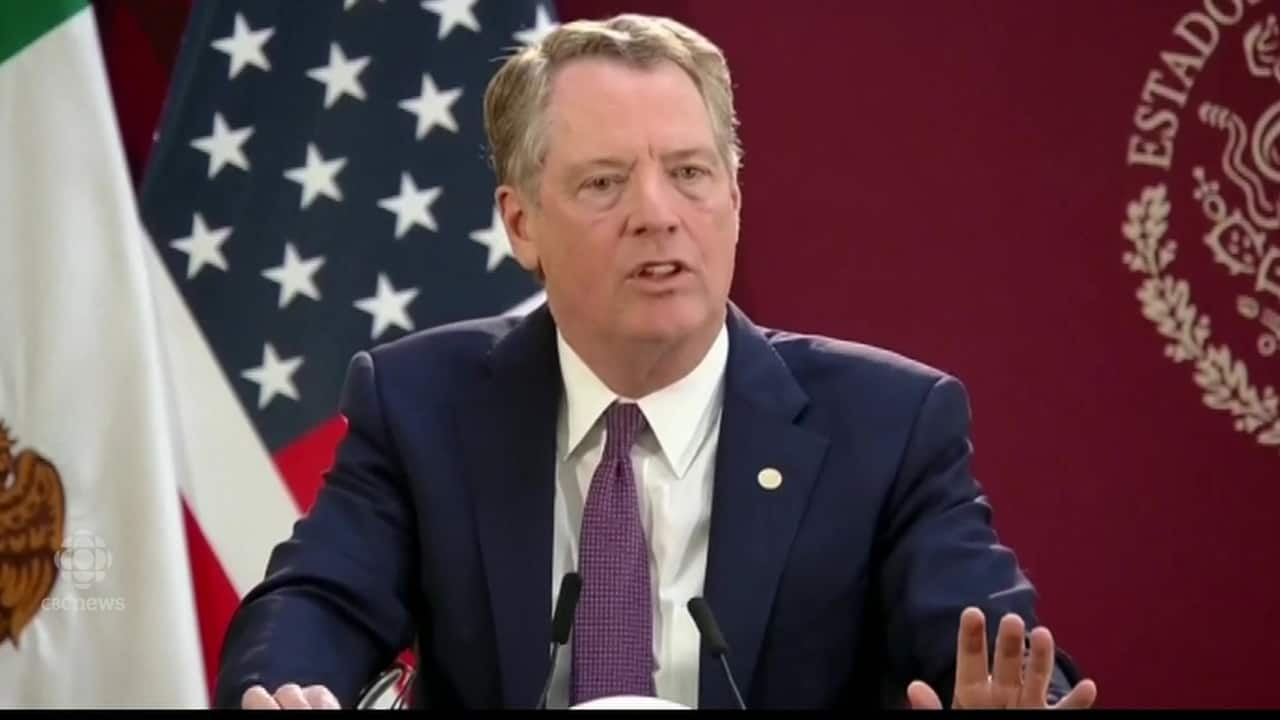 The leaders of the three countries signed the agreement over a year ago in a well-publicized event on the sidelines of the G20 summit in Argentina.

But the deal still had to be ratified by all three players, and congressional Democrats in Washington had been unwilling to move forward until now.

Lighthizer presented Seade with proposed changes on Saturday. The next day, Mexican senators met to consider the new text and signalled their approval. 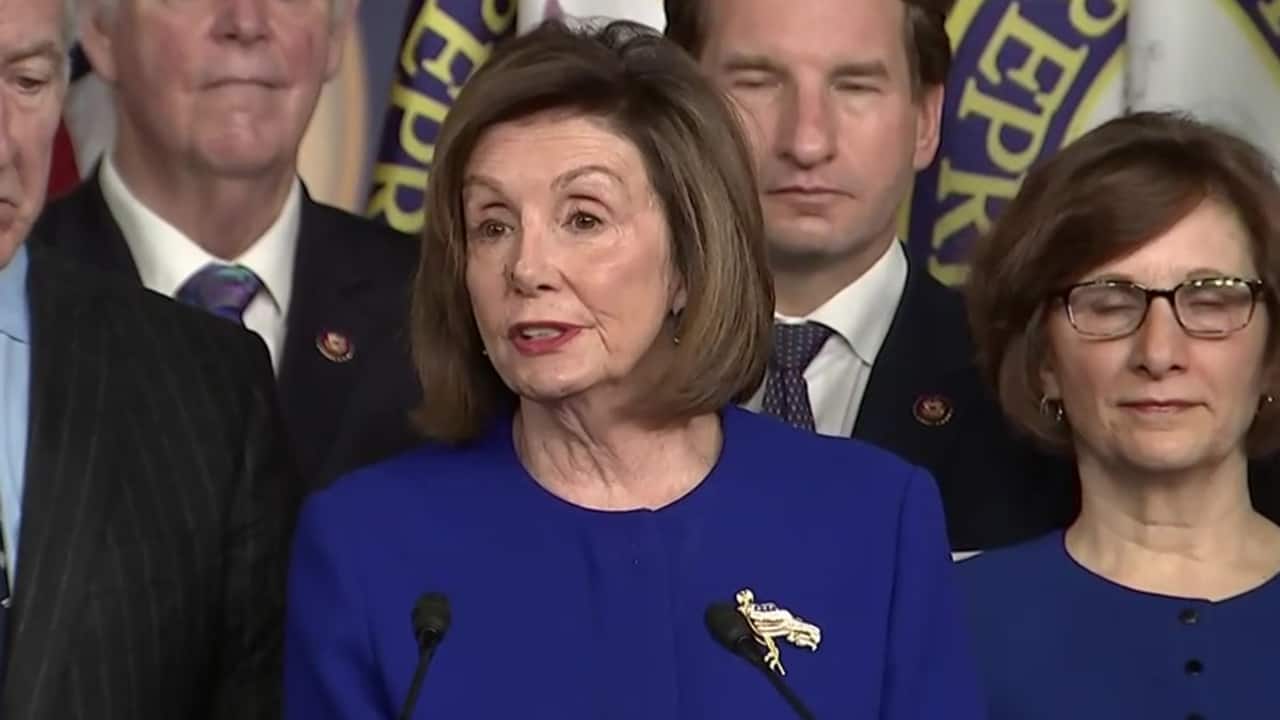 During his speech in Mexico City, Lighthizer called the amended deal the "best trade agreement in history."

"You know that the U.S. and President Trump viewed the old NAFTA as being a flawed agreement. It clearly was an agreement that needed to be upgraded in very important ways," he said.

"It's nothing short of a miracle that we have all come together. I think that's a testament to how good the agreement is."

"Today the Trump Administration has reached a deal with House Democrats on the USMCA, the biggest and best trade agreement in the history of the world," she said. "This agreement, which was negotiated over a year ago, rebalances trade in North America and is historically strong on manufacturing, agriculture, labour, services, digital trade, IP, environment, and much more."

According to a release from Richard Neal, Democratic congressman and chair of the U.S. House Ways and Means committee, the final tweaks to the deal close enforcement loopholes and bring in "new mechanisms and resources to ensure that the U.S. Government effectively monitors compliance."

The Democrats also pointed to their work in removing some provisions on prescription drug prices. Neal said the changes they made, such as the clarification of provisions on patents, will help to make needed drugs more affordable.

"I think this is good news for Canadians. It allows us to keep control of a segment of the pharmaceutical industry in Canada that's very important to Canadians, and so I'm looking forward to speaking with Minister Freeland about some of the details," she said.

Neal didn't say when the new deal will be tabled in the U.S., but Pelosi added they're hoping to get things in motion before the end of the congressional session on Dec. 20.

Canada also has yet to ratify the successor to the North American Free Trade Agreement. The Trudeau government introduced an implementation bill in the previous Parliament, but it did not pass before this fall's election.

Pelosi, surrounded by a team of Democrats, announced her support for the deal the same day they introduced articles of impeachment against Trump.

With files from the CBC's Janyce McGregor, Katie Simpson and The Canadian Press