Trump warns Congress to keep out of NAFTA talks with Canada

U.S. President Donald Trump renewed his threat to withdraw entirely from the North American Free Trade Agreement on Saturday and warned Congress to butt out of negotiations with Canada. He also tweeted: "There is no political necessity to keep Canada in the new NAFTA deal."

'There is no political necessity to keep Canada in the new NAFTA deal,' U.S. president tweets

U.S. President Donald Trump renewed his threat to withdraw entirely from the North American Free Trade Agreement on Saturday and warned Congress to butt out of negotiations with Canada.

Trudeau worked the phones Saturday in the aftermath of Friday's deadlocked trade negotiations with Washington.

The Prime Minister's Office confirmed the conversation with Mulroney, whose government delivered the Canada-U.S. Free Trade deal, a predecessor to NAFTA, after similarly hard bargaining.

Trump has threatened to impose tariffs on Canadian auto imports, which could lead to job losses in the auto sector.

The consultations took place after Canadian and American negotiators failed to reach a deal by Friday's deadline amid reports that Trump had said he would not compromise at all to get a deal with Canada. They agreed to resume talks on Wednesday.

The deadline had been set by the Trump Administration, because the White House is trying to sign a new trade pact before Mexican President Enrique Pena Nieto leaves office on Dec. 1.

Trump, however, kept up the pressure on social media, saying "there is no political necessity to keep Canada in the new NAFTA deal."

"If they can't strike an agreement that is good to the U.S. "Canada will be out," he went on to write.

I love Canada, but they’ve taken advantage of our Country for many years!

Trump also warned U.S. lawmakers, who have become increasingly uneasy that the new trade deal, formally signalled in a letter to Congress Friday, might not include Canada. The deal would then not be a reworked version of NAFTA, but a bilateral U.S.-Mexico trade deal.

"Congress should not interfere [with] these negotiations or I will simply terminate NAFTA entirely [and] we will be far better off..." Trump tweeted.

Both Republicans and Democrats have objected to a straight up bilateral deal with Mexico. Republican Senate Majority Whip John Cornyn was quoted by the American media on Wednesday saying that, without Canada, it would, "reduce the likelihood that it would actually be approved."

....Remember, NAFTA was one of the WORST Trade Deals ever made. The U.S. lost thousands of businesses and millions of jobs. We were far better off before NAFTA - should never have been signed. Even the Vat Tax was not accounted for. We make new deal or go back to pre-NAFTA!

Canadian officials, speaking on background Saturday, said they were not going to respond to tweets. They said it's not the first time the tactic has been used and the comments are "designed to pressure us and it's not going to work."

A spokesperson for the prime minister was asked for comment on the threats, but declined to address them directly.

"As we've said all week, we're working toward a modernized NAFTA, a modernized NAFTA that will be good for Canada and the middle class," said Cameron Ahmad. "We will only sign a good deal and we will not negotiate in public."

Under NAFTA's withdrawal rules, Trump must give six months' notice to the leaders of Canada and Mexico, the other stakeholders in the current pact, for the U.S. to pull out. He also must seek the support of Congress to pass such a change.

The Conservative Opposition grew more impatient on Saturday and described the absence of a deal as a "botched" negotiation where Canada was left on the sidelines.

"They knew they needed to get a deal, how important it was to their country. And when they had the opportunity to move their auto talks on bilateral standards — or auto tariffs — to the next level of talking about everything else, including intellectual property and sunset clauses, they took the opportunity." 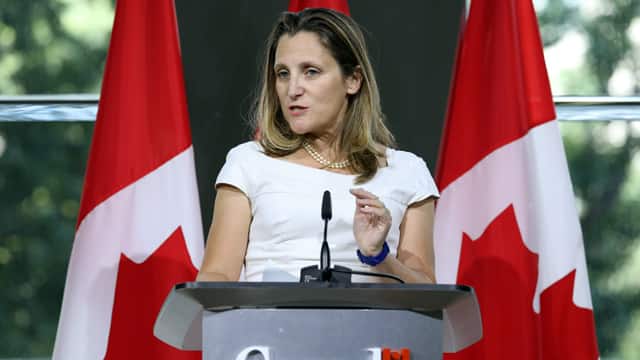 2 years ago
10:02
U.S. President Donald Trump issues threats toward Canada on Twitter as trade negotiators get set to resume discussions this week. 10:02