Quebec MP Thomas Mulcair kicked off his campaign for the NDP leadership Thursday in Montreal, surrounded by MPs and high-profile party members backing his bid. 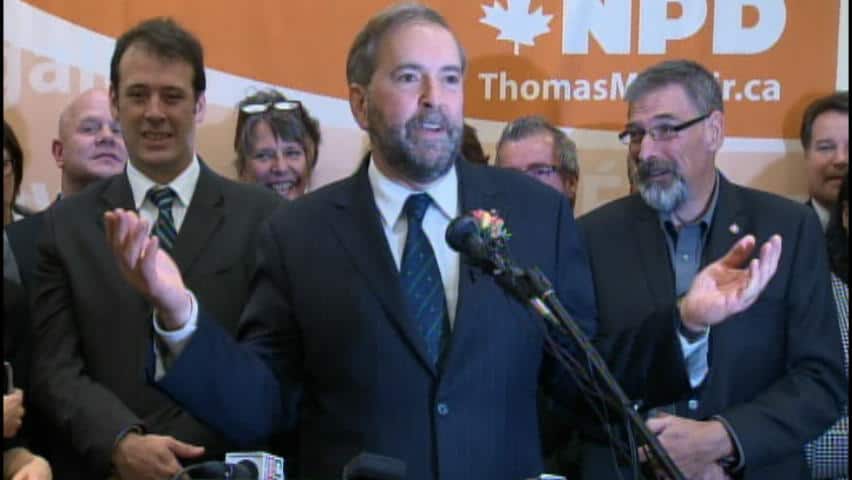 9 years agoVideo
11:24
Surrounded by MPs and other supporters, Quebec MP Thomas Mulcair announced his bid for the party leadership in Montreal Thursday. 11:24

Quebec MP Thomas Mulcair launched his bid for the NDP leadership on Thursday by highlighting his political experience, calling for a clean and fair competition and making a promise to build and unite his party.

Mulcair kicked off his campaign in Montreal with the endorsement of 33 of his fellow NDP MPs and other high-profile party members including Lorne Nystrom and New Brunswick NDP Leader Dominic Cardy. The strong caucus support for Mulcair comes mostly from Quebec, with four MPs from outside the province, all from Ontario. Thirty MPs attended the event and provided a backdrop for Mulcair as he made his remarks to launch his bid for the leadership.

Mulcair laid out the themes for his campaign and described how Jack Layton, the party's leader who died in August, recruited him to the NDP. They worked together to grow the party in Quebec from one seat, Mulcair's, to 59 in the spring election. Mulcair won a byelection in Montreal for the NDP in 2007, after quitting provincial politics where he served as a cabinet minister in Premier Jean Charest's Liberal government.

Mulcair said he is not trying to replace Layton, but aims to build upon what he did for the party. Layton led the NDP to Official Opposition status for the first time in its history by winning 103 seats in May. He said the party needs to make breakthroughs outside of Quebec so that it can move from Opposition to government in the next election, and he positioned himself as the best candidate to do so.

"This leadership race is about picking the person who is best placed to beat Stephen Harper in the next election," he said, as he bashed the Conservatives over the way they govern.

Mulcair is joining the race a month after it officially started on Sept.15. Brian Topp, the NDP's president, was the first to declare his candidacy, followed by NDP MPs Romeo Saganash, Nathan Cullen and Paul Dewar. A New Democrat member from Nova Scotia, Martin Singh, has also launched a campaign.

Mulcair called on party members to make the competition a clean, fair and honest one. He said his political experience in Ottawa and at the provincial level in Quebec, and his ability to bring people together are among the qualities he has to offer.

Mulcair's political experience was also highlighted by Nystrom, who said that the party's next leader must have "proven parliamentary experience" and "proven electoral experience."

"That is certainly Tom Mulcair," he said. Nystrom said Mulcair is the person who can take on Harper in the House of Commons and who can take the NDP from Official Opposition to government in the next election.

Cardy made similar comments about Mulcair's experience and abilities. "The NDP needs Thomas Mulcair to win," he said.

Topp is the candidate who has so far dominated the race and has some big NDP backers behind him. They include former leader Ed Broadbent and former Saskatchewan premier Roy Romanow, his old boss, and Topp has held several news conferences to showcase current MPs who support him, including Libby Davies, Françoise Boivin and Yvon Godin. Topp, a longtime NDP organizer, was elected president of the party this spring and has promised to run for a seat in the House of Commons.

Mulcair's entry in the race will pose a particular challenge to Topp, who also has deep ties in Quebec. Mulcair was named Quebec lieutenant by Layton after he was elected to Parliament in 2007 and deputy leader, along with Davies.

Mulcair said that in the wake of Layton's death he heard from "hundreds" of people across the country who encouraged him to run and that he has nationwide support.

The new leader will be chosen at a convention in Toronto on March 24. He or she will be elected using a one vote per member system and that means candidates will spend the next several months trying to sign up new members who support them in order to boost their chances of victory.

Mulcair noted that there are some delays with new members receiving their cards in Quebec, and said he's confident the party can remedy the situation quickly given the leadership race.

Peter Julian, the NDP's caucus chair, hopes even more candidates will enter the competition and he told CBC News he'd like to see some women in the race.

Topp welcomes Mulcair to the race

Topp, who welcomed Mulcair to the competition via a message on Twitter, said the role of women in the NDP is "critical" and that he's been making an effort to highlight the female supporters of his campaign. He told CBC's Susan Lunn that he also hopes more candidates, male or female, get in the game.

"I don't think that this is about quotas, I think it's about who is best to lead the party and I certainly hope that more candidates get in. The more candidates that are in, the better. It highlights the strength of our team," he said.

He also said he is pleased that Mulcair has entered the competition.

"He joins an already very good group of candidates and that's all to the good of the party. It demonstrates what an incredibly strong front bench we've got, what a great team we've got and that this is a team that is ready to govern the country," said Topp.

Topp, Mulcair, Saganash and Dewar are the declared candidates that have paid their $15,000 entry fee and filed the required paperwork to be considered official candidates by the party.

While Mulcair was launching his campaign in Montreal, Dewar held an event in Manitoba. The Ottawa MP spoke to supporters in Winnipeg and he said his goal is to get to as many communities as he can in the next five months. He also described himself as someone keen to replace Harper as prime minister.

"I want to build the NDP to reflect the hopes and aspirations of everyday Canadians and be ready to replace Stephen Harper in four years," Dewar said in a statement.