Parliamentarians were all atwitter over Manitoba MP Pat Martin's use of off-colour language in a tweet after the Conservative government ended debate on a bill to implement last spring's federal budget. 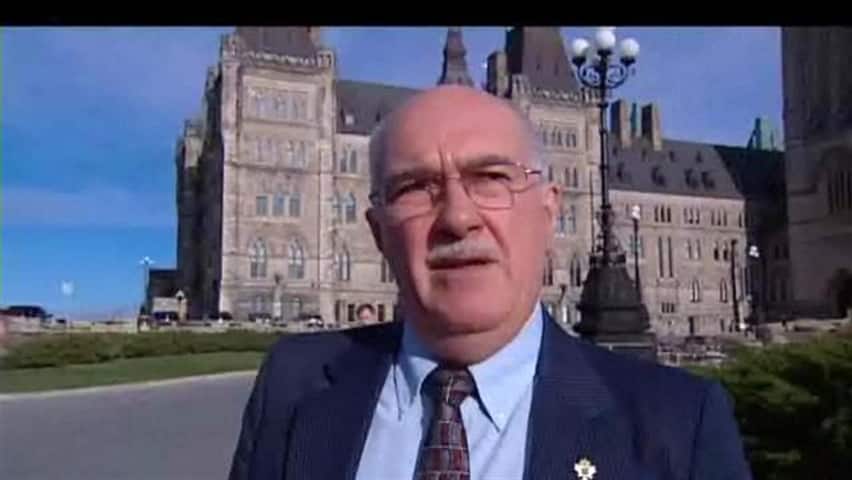 9 years ago
3:43
MPs react to NDP MP Pat Martin's use of the f-bomb on Twitter to express his frustration over a budget vote. 3:43

Parliamentarians were all atwitter Thursday over Manitoba MP Pat Martin's use of off-colour language in a tweet after the Conservative government ended debate on a bill to implement last spring's federal budget.

"This is a f--king disgrace ... closure again. And on the Budget! There’s not a democracy in the world that would tolerate this jackboot sh--."

When another tweeter called Martin a "foul mouth socialist," the response was "f--k you."

Later, another critic was invited to "eat my shorts."

"I don't think I owe anybody an apology. It was a genuine sincere expression of frustration and the public should take note: There's something very wrong going on here in Ottawa."

"It's industrial language. I'm not the first guy to use that term, that phrase, frankly. I'm a construction worker by trade. It's the way we communicate with each other," he said.

On CBC's Power & Politics with Evan Solomon, Conservative Tom Lukiwski said Martin's language crossed a line. He noted that Martin was in his seat in the Commons when he made the tweet, and called on Commons Speaker Andrew Scheer to issue a ruling on whether such use of Twitter is appropriate.

"This is uncalled for. It doesn't merit any comment on my behalf. I don't think he's really generating respect for what happens here in Parliament."

"The use of offensive, provocative or threatening language in the House is strictly forbidden. Personal attacks, insults and obscene language or words are not in order.

From the Rules of Debate

Conservative MP Harold Albrecht (Kitchener-Conestoga) said he didn't know whether the matter had been raised with the Commons Speaker.

"At the end of the day I would hope that Pat would rethink his use of inappropriate language in an environment that should be a model for co-operation. We all get frustrated. But to use that kind of language, I'm sorry, it's inappropriate."

"It's disgusting. Nothing is going to happen. I think that everyone should simply recognize the guy for the idiot he is and simply move on," Toews said.

Martin, NDP MP for Winnipeg Centre, added another tweet Thursday to confirm his account was not hacked — his earlier language on Twitter had simply reflected his anger with the Tories.

"Nope. Not hacked. Just truly p---ed off ... you should have seen them last night laughing and joking in their smug ignorance," he said of the governing Conservatives.

"I think it is a disgrace what's happening [in Parliament]. I've never seen a bunch of guys that are so angry that they have power," Angus said. "They come in here, they shout, they heckle, they shut down committees, they go in camera. They're like spoiled brats. So right on Pat. He called it what it is. People need to know."

'The people of Canada will judge'

Liberal MP Carolyn Bennett said she shared Martin's frustration with the government's moves to curtail debate, even if she didn't condone his method of expression.

Was Pat Martin out of line? Take our survey.

But Breitkreuz said it was the opposition who wasn't being serious.

"If the NDP truly wanted to have a serious debate on this, they wouldn't be employing all these tactics to basically shut down debate [on the bill]," Breitkreuz said. "Because they played games, that debate was shortened."

Government House leader Peter Van Loan said Thursday that the House has been debating the budget since it was first introduced last March.

"We're now almost near the end of 2011 and it's about time that we implemented this budget," Van Loan said. "The real issue is we've had the broadest debate I've ever seen on any budget in Canadian history, including a full election on the subject."

"There's something seriously fundamentally wrong here in Ottawa and if it took an f-bomb to draw attention to it so be it," Martin said.