Motion to study when life begins defeated in Parliament

A motion to study the Criminal Code's definition of when human life begins was defeated in the House of Commons Wednesday night. 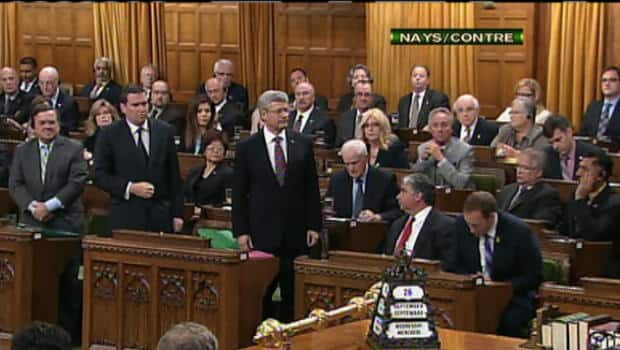 8 years ago
2:27
A motion to study the Criminal Code's definition of when human life begins was defeated in the House of Commons Wednesday night, but eyebrows were raised when Status of Women Minister Rona Ambrose voted in favour 2:27

A motion to study the Criminal Code's definition of when human life begins was defeated in the House of Commons Wednesday night.

Members of Parliament voted 203 to 91 against Motion 312, sponsored by Conservative MP Stephen Woodworth.

The private member's motion sought to set up a committee to study how the Criminal Code defines when life begins. The provision, in the homicide section of the code, says a child becomes a human being when it has fully left its mother's body.

Labour Minister Lisa Raitt said she voted the way her constituents knew she would, against the motion.

"It's time to move on," she said. "My constituents knew that this was something the government would not be opening up."

Critics said the motion was an excuse to reopen the debate on abortion in Canada and set limits on the procedure. Woodworth had said he hoped having a debate would convince Canadians to oppose abortion.

After the vote, Woodworth said he thought some of his colleagues voted against the motion out of respect for Harper.

"I'm a great believer in democracy … and ultimately the House of Commons will respond," Woodworth said.

Woodworth said last week that he didn't expect the motion to pass. The Conservatives, NDP and Liberals treated it as a free vote, meaning MPs were not told how to vote on the motion.

The NDP accused the government of using a private member's motion to push an agenda it's afraid to tackle more officially.

Interim Liberal Leader Bob Rae said the House reflected the will of Canadians that the issue is closed.

But Rae said that Ambrose's vote in favour of the motion reflects the divide within the Conservative caucus over abortion.

Woodworth said he was "grateful to [Ambrose] for reflecting the desire I have on this issue."

Read a recap of the live blog below - mobile users read it here.