Conservative MPs get into tense, snarky exchange with Morneau at finance committee

It became testy and a personal Monday when Finance Minister Bill Morneau appeared before a House of Commons committee to defend the Liberal government’s latest budget.

The talk turned testy and personal Monday when Finance Minister Bill Morneau appeared before a House of Commons committee to defend the Liberal government's latest budget.

He tangled with Conservative members of the finance committee who attempted to take him to task over the growing size of the federal debt and questioned his commitment to promoting gender equality.

Morneau turned aside MPs concerns about how the federal market debt — the debt Canada pays interest on — crossed the $1 trillion threshold in the current budget year.

"Canada's fiscal house is in order, which means we are resilient to shocks and uncertainty in the economy," he told the all-party committee, pointing to the fact that the country's debt as a share of the overall economy was going down.

The Liberals would not "take the Conservative approach to cuts," he said, adding that $150 billion of the federal government's budgetary debt was run up by the previous government during the financial crisis.

The $1 trillion reflects the federal government's estimated total liabilities or "cash needs" and what must be borrowed from the markets. The figure includes the debts of Crown corporations and accumulated federal budgetary deficits.

Conservative MP Pierre Poilievre and Morneau got into an extended — sometimes snarky — exchange over the broken Liberal 2015 election promise to run "modest" deficits but return to balance in the coming budget year.

"This was your platform," Poilievre said. "You said you would balance the budget next year. That was the Liberal approach that you ran on. Are you now saying you were wrong?"

Morneau, who remained composed throughout the grilling, took a parting shot at Poilievre, a career politician who served as the secretary of state for democratic institutions and as employment minister under former prime minister Stephen Harper.

"It's a challenge when someone hasn't had experience in managing a balance sheet, or in fact managing anything of substance," he said. Conservative MP Dan Albas piled on with a bit of political theatre, handing Morneau a cheque, supposedly written by a constituent in his riding. It was meant as a payment on the federal debt.

He demanded to know what the plan was to eliminate the budget deficit, which stands at $18.1 billion in the 2018-19 fiscal year.

"We're not going to go back to doing things the way the Conservative government before us did, and focus on one number," said Morneau, referring to the previous government's single-minded determination to eliminate the deficit.

That figure on market debt — which appeared in the latest budget — is a number that, under the previous government, had not been reported.

"With greater transparency, there comes responsibility for people" to look at the numbers, Morneau said, noting that a portion of the market debt belongs to the Canada Mortgage and Housing Corporation, which backs housing loans. 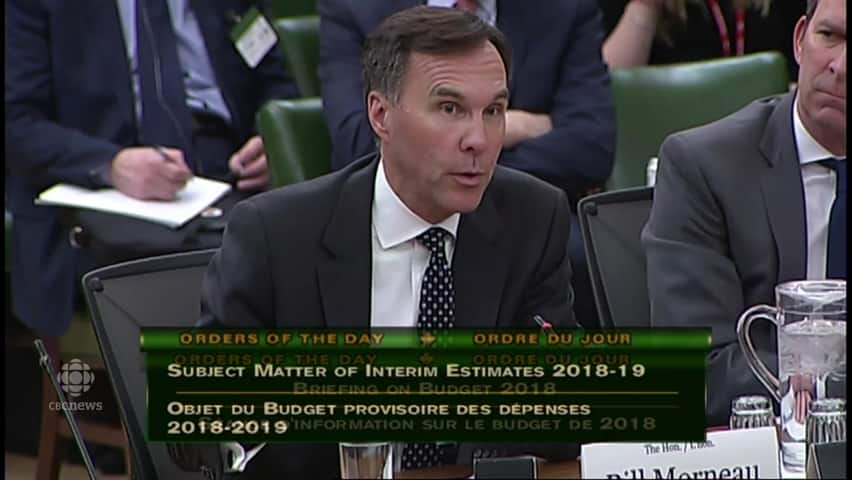 Taking a closer look at the numbers is precisely what former parliamentary budget officer Kevin Page has done; he said borrowing on behalf of Crown corporations over the last few years has been extraordinarily high, with little in the way of explanation.

Also, the budget shortfalls being run by the Liberals have mostly been to finance increased program spending because many capital projects remain stalled.

"It's not like we're running deficits to pay for military equipment that's going to be around for 30 years, or infrastructure," Page said. "We're not even getting that money out the door. It looks like we're borrowing more for current consumption."

Page equated the spending to running up the VISA bill in a time of rising interest rates.

Conservative MP Lisa Raitt left the deficit aside to launch her own spirited attack on Morneau, claiming that his record in promoting and advancing women was not up to par.

"Now minister, I think it makes sense for us to look at your track record when we determine whether or not we can trust you to implement what you say you are going to do," Raitt said.

Morneau said he's hasn't played a role in Morneau Shepell since entering politics and that he subsequently sold all of his shares in the firm.

"What I can tell you is that during the course of my business career I found the effective way for us to be successful included trying to promote people who were highly effective and promoting women was an important part of that objective," Morneau said.

Raitt interrupted, saying that none of the Morneau's appointments at his former company made it to the "C suite" or senior executive level. "Three out of 11 is abysmal," Raitt said.

Morneau shot back, defending his record at Morneau Shepell.

Raitt replied that the person in question "is still a woman and indeed she was paid less than any other director in 2012 when you were there."

A 2017 report by the international business law firm Osler found that among all companies that disclosed the number of women on their boards in Canada, women held only 14.5 per cent of all board positions.

The report also notes that for TSX listed companies, that number rises to 26 per cent.

With files from Peter Zimonjic