A month ahead of the federal budget, Finance Minister Bill Morneau tells Canadians that the deficit will be at least $18 billion. But, as Aaron Wherry writes, he also sets a goal of "reimagining the Canadian economy."

Appearing amidst an audience of interested citizens at a community centre in east Ottawa, Bill Morneau seemed at one moment to be reading his own stage directions.

"The most important thing I'm doing today," he said, responding to a reporter's question, "is I'm reaffirming for Canadians that our approach to focus on growing the economy is the right approach."

But his interesting notion of economic policy is competing with a large number.

Morneau displayed an odd habit of telling his audience what he was telling them — half a dozen sentences prefaced with unnecessary transitions like "I can tell you" and "what I can tell you." And to another question, he similarly clarified that, "I'm here this morning to tell Canadians that we believe our plan to grow the economy is doubly important in the face of a volatile economic situation."

So the right government has arrived at precisely the hour of need. What luck (if Morneau is lucky).

What he did not tell his audience was the number that was reverberating elsewhere as he spoke: $18.4 billion. That number, disclosed an hour earlier in a briefing for reporters, is the projected deficit for the next fiscal year. It is, unquestionably, a large number. A number that is noticeably larger than the "modest" $10-billion deficit the Liberals promised during last year's campaign.

And a number that doesn't yet include the new spending the Liberals are committed to implementing.

"Our starting point is much further back than we thought," the finance minister said. "In order for us to provide the growth the middle class needs, short-term deficits will be larger than expected."

Morneau — handsome in an everyday sort of way, tall and seemingly good natured — arrived to federal politics two years ago as something of a star candidate and he was an easily plausible option for finance minister: the chief executive of a prominent pension management firm that bears his surname, former chair of the C.D. Howe Institute, an alumnus of the London School of Economics. 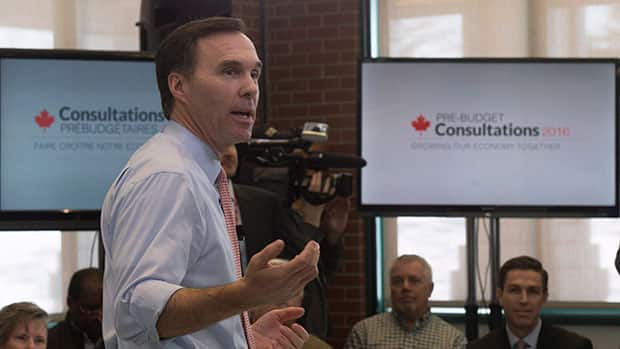 5 years ago
4:11
Finance Minister Bill Morneau is forecasting larger-than-expected deficits for the next two years because the economy has deteriorated since November update 4:11

But he is also still a rookie. And he is presumably still figuring out how to be a finance minister (the effort of formulating responses is still apparent). And now he must play a prominent role in justifying a larger deficit — and an unclear return to surplus — and rehabilitating a national economy.

His turn today at starting to do so involved him standing, perhaps a bit awkwardly, in the middle of the room — sleeves rolled up to the elbows, red polka-dot tie hanging a little long — glancing back and forth between teleprompters in front of him, while screens behind him flashed slogans and important-looking line graphs. "A New Path Forward" was illustrated with a sun-dappled, tree-lined highway stretching out toward mountains.

He pointed to a low price for oil and a weak rate of economic growth — officially, some $12 billion of that $18-billion shortfall is credited to economic conditions beyond the Liberal government's decisions — but also the "Band-Aid solutions and inaction" of the previous government that apparently left Canada's economy "too vulnerable" to the global economic situation.

"We know that it's important to be open and transparent with you about our economic situation," the minister said, flattering himself.

In between enthusing about the "long term" perspective and his government's "plan," he dismissed unnamed reactionaries. "I won't have budget 2016 simply become a knee-jerk reaction to recent economic shifts," Morneau explained.

And there was, in conclusion, a folksy analogy about digging ourselves out after a snowstorm, which at the very least was blessedly not a hockey analogy.

'A troubling day for taxpayers'

Insofar as the Liberals were already publicly committed to running deficits, they might at least be better placed than either the Conservatives or New Democrats, they of the commitments to balance the budget, might have been in the same situation. And no one has yet come forward with a list of expenditures and initiatives that should not be pursued.

But the leader of the Opposition still greeted today as "a troubling day for taxpayers." And no doubt the Conservatives are cheered now by the chance to point to an expanding deficit as damning evidence of a reckless government incapable of making the difficult decisions. That much will chase this government as it goes. Precisely one month ahead of the budget, the Liberals might have at least undercut the shock that something like a $25-billion deficit might have been on March 22. But that is a limited victory. The economy, so dependent on factors beyond any government's control, is crawling along. The price of oil is not rebounding. Regional tensions are simmering. The federal treasury is, against orthodoxy, in deficit.

Next month's budget, the details of which might now be better dwelled upon, must seem like a plan. The ensuing three years must presumably justify those deficits.

"A less ambitious government," Morneau humbly bragged this morning, "might see these conditions as a reason to hide, to make cuts or to be overly cautious."

Fans of both knee-jerk haste and fearful caution will thus apparently be disappointed.

Later, casting beyond even short-term responses to stagnation, he put the goal at nothing less than "reimagining the Canadian economy."

That — an innovative, productive and low-carbon economy, the likes of which the government teases and aspires to — sounds like the sort of thing that might not come easy.