Mohamed Fahmy is calling on Prime Minister Stephen Harper to intervene after a meeting between Foreign Affairs Minister John Baird and his Egyptian counterpart didn't secure his release. 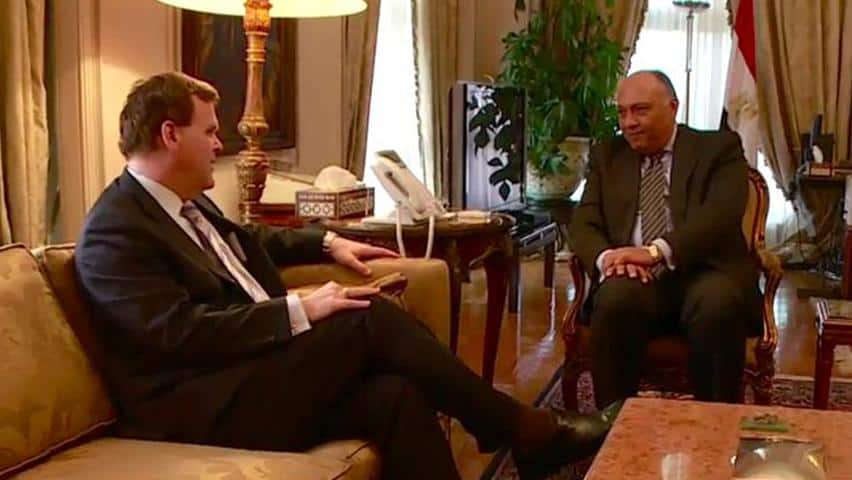 "I understand that the ability of the Canadian government to help me is limited by the rules of diplomacy. But I do believe that Prime Minister Harper could do more to obtain my release if he were to directly intervene in our case," he said in a statement issued through his lawyers.

"It's still not resolved today," Baird said after the meeting in Cairo. "But that's why I came.

"I wasn't naive to suggest that I would come and the situation would be resolved. But I think by coming here, by meeting directly with the minister and engaging in a constructive, productive dialogue, we will resolve, successfully resolve, this issue."

Fahmy's statement said it was "vital that Ottawa continues to engage with my lawyers Amal Clooney and Lorne Waldman at this critical stage of the negotiations so that my colleagues and I can achieve a smooth transition to freedom."

Baird turned down a request to meet with Clooney directly earlier this month.

'Anyone can become a victim'

"My situation and the ongoing legal limbo that I am enduring affects all Canadians who are in the Middle East, because it shows that anyone, regardless of how innocent, can become a victim of the political turbulence here," Fahmy's statement said.

Earlier this month, an Egyptian court ordered a retrial for Fahmy and his colleagues, Australian correspondent Peter Greste and Baher Mohamed, an Egyptian producer, but a date has yet to be set.

The three Al-Jazeera English journalists were convicted last year of terror-related charges and sentenced to between seven and 10 years in prison — charges all three men deny.

They were convicted of spreading false information on behalf of the banned Muslim Brotherhood organization, now considered a terrorist group in Egypt. The evidence used against them is widely seen as unrelated or fabricated, the CBC's Derek Stoffel reported from Cairo.

"We want to see Mr. Fahmy returned home as expeditiously as possible, whether it’s through deportation, pardon, whether it's through a retrial," Baird said, giving no indication of how close a resolution may be.

"I feel better than when I left Canada," Canada's foreign affairs minister said.

The statements came as a disappointment to Fahmy's family, who had expressed hope that Baird's visit would mark the "finale" to Fahmy's ordeal.

"We expected that the deal would be sealed during Mr. Baird's visit," Fahmy's fiancée, Marwa Omara, told The Canadian Press before meeting with Baird Thursday. "However it seems that … there is no decision made or nothing will be done during the visit."

"We hope that there will be good news. We have to keep, to always be hopeful and always look at the bright side in order to survive," she told CBC News later.

NDP foreign affairs critic Paul Dewar suspects that a day or two after Baird leaves, Fahmy's case could be resolved, meaning he might be coming home within in a week or two. But it's about more than one Canadian in jail — freedom of the press is also at stake, he says.

"The Egyptians did pass a new law recently which would allow the government of Egypt to essentially deport people back to their country of origin, if they were going to serve and be subject to the justice system of the country of origin," he told host Hallie Cotnam on CBC Radio's Ottawa Morning. "Obviously we don't find that acceptable. But obviously if you are the family of Mohamed Fahmy you want him home. So this is where the negotiations are important.

"Are we going to see a retrial that says … the evidence was flawed, we'll allow Mohamed Fahmy to leave without charge, being sent home, or will there be a requirement to have him come back here and be subject to justice?"

No trial in Canada: Baird

"In Canada we would have no basis to put Mr. Fahmy on trial. That would not be an option which would be acceptable to the government of Canada," Baird said Thursday.

Fahmy's fiancée, Omara, wasn't sure if Baird's position would help or complicate things.

“What if the Egyptian government wants him to face a trial [in Canada]? Then this might delay the process. I really don’t know,” she said.

Dewar said Baird's visit was a chance to plead Fahmy's case again and get clarification from the Egyptians on the timelines for the retrial that has been promised.

"The Egyptian government knows that it has to be accountable," Dewar said. "This is a time to keep our foot on the pedal, to stay engaged."

With files from Derek Stoffel, Sasa Petricic and The Canadian Press