The P.E.I. senator is expected to take the stand, once the Crown wraps up its case. Duffy has said almost nothing publicly since the trial began in April.

The P.E.I. senator is expected to take the stand, once the Crown wraps up its case

The last chapter of the long trial of Sen. Mike Duffy will be headlined by a much anticipated appearance by the main character himself.

On Thursday, Ontario Justice Charles Vaillancourt will resume hearing the Crown's case against Duffy on 31 charges of fraud, breach of trust, and bribery. The senator for Prince Edward Island has pleaded not guilty, arguing he followed all the Senate's expense and spending rules as they were spelled out at the time.

Crown prosecutors will be wrapping up their evidence over the span of roughly a week, bringing forward a final set of witnesses. Chief among them will be Duffy's friend and former colleague Gerald Donohue.

Duffy himself is expected to take the stand once the defence begins presenting its case, once the Crown is done.

Duffy awarded Donohue some Senate contracts for research and consulting services, and Donohue in turn cut cheques to other service providers through family companies, including a private trainer and a makeup artist. Donohue has been in poor health, and the court has had difficulty organizing dates for his testimony.

That particular element of the trial will hardly be as compelling as the testimony in August of senior members of former prime minister Stephen Harper's staff, including former chief of staff Nigel Wright. The details of who was involved in dealing with Duffy's $90,000 in contested expenses, and who knew that Wright secretly repaid them, reverberated through the first weeks of the election campaign.

With Harper and the Conservatives now out of power, interest in the details of how his Prime Minister's Office and Senate leadership tried to make the scandal go away might wane.

Still, the main attraction for the late fall sitting will be Duffy himself, who defence lawyer Donald Bayne has always promised would appear as a witness. Duffy has said almost nothing publicly since the trial began in April.

Duffy, a former broadcaster, made two dramatic speeches on the Senate floor two years ago, striking out at Harper and his team and promising that he would have many more details to reveal. 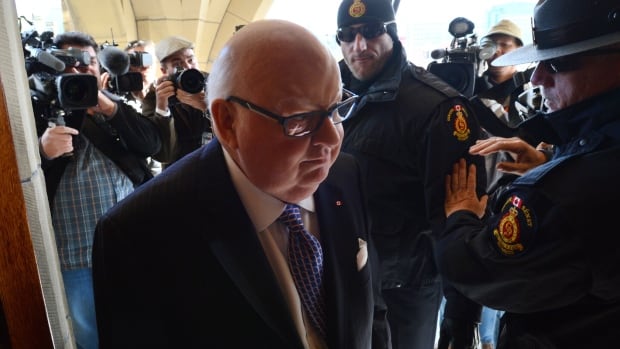 He has always maintained that he was coerced into saying he would repay his Senate living expenses, even though he never thought he had done wrong.

"Canadians know me as an honest guy. To pay back money I didn't owe would destroy my reputation," Duffy told the Senate in October 2013.

"The PMO piled on the pressure. Some honourable senators called me in P.E.I. One senator in particular left several particularly nasty and menacing messages: Do what the prime minister wants. Do it for the PM and for the good of the party. I continued to resist. Finally, the message from the PMO became: Do what we want or else."

The court has scheduled this portion of the trial to run until Dec. 18, but there is a possibility the lawyers will need more time to present their final arguments at another juncture.

"It's been a very long and difficult experience for Sen. Duffy and his wife Heather," Bayne told The Canadian Press. "Any Canadian can understand how difficult this is and particularly for someone dealing with the health issues he has."