Senate finance officials signed off on Mike Duffy's expenses to live in Ottawa even though they had been informed he had been living in his Kanata home for seven years, the suspended senator's lawyer argued in court today.

Trial of suspended senator enters its 15th day in Ottawa 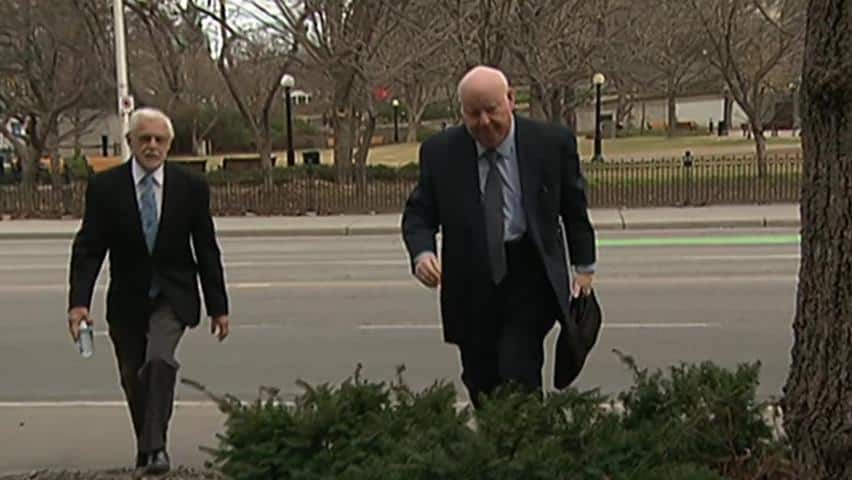 Senate finance officials signed off on Mike Duffy's expenses to live in Ottawa, even though they had been informed he had been living in his Kanata home for seven years, the suspended senator's lawyer argued in court today.

Duffy's lawyer Donald Bayne continued his cross-examination Monday of Nicole Proulx, the former head of Senate finance, which oversees the budgets, contracts and expenses of senators.

Duffy has pleaded not guilty to 31 charges of fraud, breach of trust and bribery related to expenses he claimed as a senator and later repaid with money provided by the prime minister's former chief of staff Nigel Wright.

On the 15th day of the trial, Bayne argued in provincial court in Ottawa that his client never tried to hide that he lived in the Ottawa area. Duffy mentioned in an email to finance officials that he and his wife had paid utilities at his Kanata-based home for seven years.

Bayne asked Proulx whether, with this disclosure, Senate finance officials said, "Wait a minute...we've got to inquire further into this." He also asked whether Proulx, in her oversight role, caused anyone to raise questions.

Proulx said she didn't recall having that information brought to her at the time.

Residency is one of the central issues in the case against Duffy. He designated his home in P.E.I. as his primary residence, and he maintains that's the case, making him eligible to claim meals and living expenses for his time in Ottawa. The Crown disputes that Duffy's primary residence is in P.E.I.

Bayne has argued that the various rules and regulations guiding senators provide no clear definition on the term "primary residency." Proulx testified that when a senator signs a primacy residency declaration, officials "don't assess the primary residency."

She also agreed with a Deloitte audit that found there were no definitions or criteria clearly laid out for establishing "primary" or "secondary" residence.

Bayne also took a shot at New Brunswick Senator Carolyn Stewart-Olson, Prime Minister Stephen Harper's former communications director. Stewart-Olson had claimed her primary residence to be in New Brunswick but lived in Ottawa, meaning she too received living expenses as she "sat in judgment" of Duffy, Bayne said.

Court also learned of the existence of an unpublished 2013 internal audit on Senate residency that Bayne might want to put into evidence. Details of this audit have not been made public, and the Senate has served notice it will assert privilege, meaning its findings will remain secret.

Earlier, Bayne continued his intense grilling of Proulx, suggesting she lacks objectivity as a witness at the trial and is favourable to the Crown's case. He pointed out emails between Proulx and RCMP Sgt. Greg Horton, the lead investigator in the Duffy case, in which they addressed each other by their first name. Bayne also highlighted portions of her emails that included the lines, "Hope you are enjoying your holidays," or "Hope this will be helpful."

During cross-examination on Friday, Bayne repeatedly asked Proulx why she was not willing to meet with him about the case, yet agreed to meet with Crown officials on a number of occasions.

"You're not an advocate, you're a witness Ms. Proulx," Bayne said. Proulx defended her actions, saying she received a subpoena from the prosecution and that, after consulting her lawyer, had decided not to meet with Bayne.

Bayne asked whether, during an interview Proulx had with Crown officials, she expressed concerns over how her administration was being portrayed in the courts and the media.  Proulx said there was a general feeling that the administration was on trial, adding that she was told she would not be on trial.

Duffy's lawyer responded that she's not [on trial]. and that there's "only one person whose liberty is at stake."

This week, the trial is expected to hear from former Sun News host Ezra Levant, who will testify about two cheques he received for writing speeches for Duffy.

But court may also hear from Gerald Donohue, one of the key witnesses, who is also recovering from serious health issues. Duffy awarded contracts worth roughly $65,000 to Donohue, but the RCMP have alleged that "little or no apparent work" was done in exchange for the payments.

The Crown has argued that Donohue instead used some of that taxpayer money to pay for inappropriate or non-parliamentary services for Duffy.

Court has heard that Donohue issued cheques for services expensed by Duffy that included payments to an office volunteer, a makeup artist, a photo processing firm and a personal fitness trainer. Cheques signed by Donohue to pay for those services came from either Maple Ridge Media, or later Ottawa ICF, companies owned by Donohue's family, court has heard.

Proulx has testified that Duffy did not have the discretion to change the nature of the work described in those contracts, meaning money allocated for those contracts could not be used for other Senate services.

With files from Kady O'Malley