Mike Duffy's lawyer attempted to swat away some of the accusations that his client billed for expenses not related to parliamentary functions, arguing that they may have been "administratively irregular," but appropriate work-related costs nonetheless. 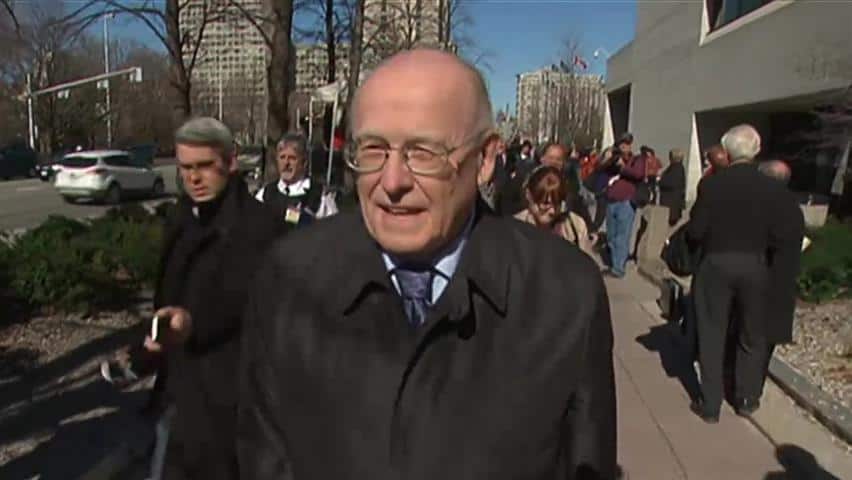 Duffy trial timing up in the air

6 years agoVideo
2:13
Ontario court Justice Charles Vaillancourt says it is up to the lawyers as to how long the trial will take. 2:13

Mike Duffy's lawyer attempted to swat away some of the accusations that his client billed for expenses not related to parliamentary functions, arguing that they may have been "administratively irregular," but appropriate work-related costs nonetheless.

Donald Bayne battled back against testimony given earlier this week by Sonia Makhlouf, a Senate human resources official, whose job it was to assess Senate research contracts and ensure the services being billed pertained to parliamentary business.

Duffy has pleaded not guilty to 31 charges of fraud, breach of trust and bribery related to expenses he claimed as a senator and later repaid with money provided by the prime minister's former chief of staff. On Wednesday, Ontario provincial court Judge Charles Vaillancourt told the court that he expected the trial would go on longer than the allotted number of days (41).

Today marked the seventh day of the trial, and Makhlouf has been only the second witness to testify.

Bayne went over Makhlouf's previous testimony. She had been asked on Monday if contracts would have been approved if the description of services included a $500 payment to a volunteer, a $500 payment to staff, payment for physical fitness training and payment for a makeup artist. She has said they would likely not have been approved because none of those services are considered parliamentary work,

She was also asked if photographic services, including enlarging a picture of Barbara Bush or an enlargement of an image of Duffy's daughter and grandson, would be approved.

Again, Makhlouf said it "has to be in the context of Senate business related."

But Bayne suggested these payments were all appropriate and expanded on those services. The expense for the physical fitness training was actually for a consultant to help Duffy with a project regarding the health and fitness of Canadians, Bayne said.

He suggested the makeup cost was for Duffy to attend a G8 meeting at the invitation of Prime Minister Stephen Harper.

Bayne said a $500 payment was to receive consulting services from a qualified expert on reputation management. Another $500 payment to a volunteer, Bayne said, was for office work conducted over five months.

And he also pointed out that photographs and development of films are valid uses of senators' expense budgets and that the Harper government has spent $2.3 million on photographic services.

Bayne argued that while it may have been "administratively irregular" for Duffy to treat some of these services as part of research and contracts, the work, as described by Bayne, would be considered senate related. And Makhlouf agreed.

Earlier, court heard that some contracts are approved after work has been completed and that in other cases, it's left to Senators to approximate the value of the work.

Bayne was reviewing with Makhlouf contracts totalling nearly $65,000 that had been made with the firm of the suspended senator's friend, Gerald Donohue.

Makhlouf explained that senators would sometimes submit requests after the start date of a contract. Human resources, she said, would advise senators that next time they would "appreciate you send your request earlier."

But she insisted that Senate administration had a "legal obligation" to pay the contract.

Bayne said the guidelines and policies may be one thing, "but the practices are another." "Yes." Makhlouf replied.

On another contract with Donohue's firm, Duffy had written that the total cost was to be determined because it was based on an hourly rate. But Duffy was informed by another human resources officer (not Makhlouf) that a contract needs an actual amount.

Bayne said that human resources officer was basically telling Duffy he could give an approximate amount, and if he went over that amount he could modify it and put in another amount.

"That again is evidence of the degree of discretion all these senators have," he said. "Just put an amount in there and you can change it up or down later."

On Tuesday, Bayne peppered Makhlouf with questions about senators' office budgets, and got her to concede that senators have broad administrative discretion when it comes to deciding how to use their office budgets, including who they can hire and the duties of their researchers.

But he also zeroed in on the research contracts themselves, and the lack of oversight relating to, as he put it, "whether the work was done, what was done, who did [the work], whether there was value for money for the taxpayer."

With files from Kady O'Malley and Rosemary Barton