A former legal advisor to the Prime Minister's Office said that he believed Stephen Harper's current chief of staff was part of a conference call in which Nigel Wright's plan to personally repay Mike Duffy's questionable expenses was discussed. 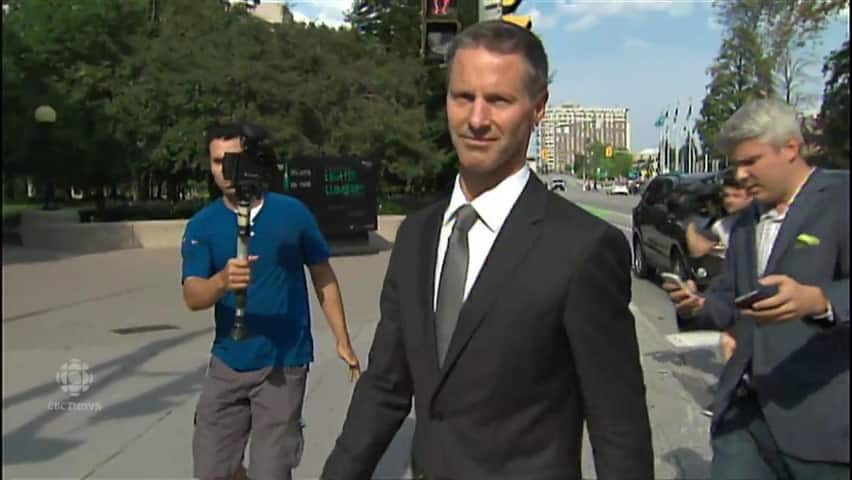 5 years agoVideo
1:25
Nigel Wright leaves the Ottawa Courthouse after his fifth day of testimony at the Mike Duffy trial. 1:25

A former legal advisor to the Prime Minister's Office said that he believed Stephen Harper's current chief of staff was part of a conference call in which Nigel Wright's plan to personally repay Mike Duffy's questionable expenses was discussed.

But Benjamin Perrin's statement to the RCMP, which was read out at the Duffy trial today, seems to be at odds with what Wright and the Harper campaign have said about Ray Novak's knowledge regarding the $90,000 cheque.

"Ray was in that meeting and Ray heard this," Perrin said, according to the Feb. 2014 statement read out in court by Duffy's lawyer Donald Bayne. "And I remember looking at Ray to see his reaction ... So this is black and white, OK?"

The evidence came as Wright also revealed that he had been in touch with Novak as little as two weeks ago.

Novak has been in the headlines since emails revealed at the Duffy trial suggested Novak, who was Harper's deputy chief of staff in 2013, may have been aware of Wright's plan.

In court today, Wright told Bayne that he had last spoken to Novak in May or June. But when pressed on when he last communicated with Novak, Wright said it was about two weeks ago.

He said it was through BlackBerry messages for "a minute or two."

'Ray wasn't on the call'

Wright also testified that Novak did not take part in the conference call in March 2013 in which he discussed personally paying back Duffy's controversial expenses.

"Ray wasn't on the call. He may have dropped into the office for part of it. He was not on the call," Wright said.

"I think I wanted him on the call but he didn't participate," Wright said.

One email presented in court,  dated March 22, 2013, said Novak would be part of a conference call with Wright, Duffy's then-lawyer Janice Payne, and Perrin.

Wright told court on Tuesday Novak had "popped in and out."

In another email, on March 23, Wright wrote to Novak and Perrin saying, "I will send my cheque on Monday."

A Conservative spokesman has said Novak was on the first part of that conference call, but didn't hear discussion of Wright's cheque. He also said that Novak never opened the email from Wright in which Wright says he will send the cheque.

But Perrin said, according to the transcript read out in court, that he believed Novak was in the room at the time of that conference call.

"My testimony is that he was in the meeting and you have a follow-up email to that meeting to Ray Novak where Nigel Wright says, 'I will send my cheque on Monday," Perrin said in the statement.

"The people that I, from my own personal knowledge, knew about this was obviously Nigel Wright, myself, Ray Novak and David van Hemmen, Nigel's assistant."  Perrin is expected to testify at a later date.

Earlier, Wright had denied that he attempted "to fix" an outside audit being conducted by Deloitte that was looking into the residency and expense claims of senators.

Bayne has pored over a series of emails from members of the Prime Minister's Office, including Wright during his time as Harper's right-hand man, all related to Duffy's expenses.

In the one email, Wright said he wanted Conservative Senator Irving Gerstein to "work through senior contacts at Deloitte."

"You are the director of this scheme to have Senator Gerstein secretly approach Deloitte to fix their [report]," Bayne asked Wright on Tuesday.

"No it's not true," Wright said. I'm actually trying to get clarity."

Wright said he was just hoping to get Gerstein together with Senator David Tkachuk —  the chair of the Senate steering committee that had asked for the audit — and members of Deloitte to "close the loop."

Wright said he wanted Deloitte to be aware of a proposal by Tkachuk that Deloitte drop the review into Duffy since Duffy had agreed to repay his expenses.

Also Tuesday, Bayne referred to another email from Patrick Rogers, who was manager of parliamentary affairs at the PMO, in which Rogers said he spoke with Gerstein. Rogers wrote that Gerstein "agrees with our understanding of the situation and his Deloitte contact agrees.

"The stage we are at now is waiting for the Senator's contact to get the actual Deloitte auditor on the file to agree. The Senator will call back once we have Deloitte locked in," Rogers wrote.

Bayne charged: "The senior guy at Deloitte is going to try and influence the actual auditor conducting the strictly confidential work to agree that we can call it off now because ...  Duffy's repaid."

But Wright said those were Rogers's words, not his, and that's not what he had intended or asked Gerstein to do.

Bayne asked Wright whether he immediately wrote back to Rogers to say that his characterization of what Gerstein was doing was wrong.

"I didn't do that, but I was highly confident that Senator Gerstein wouldn't do the kinds of things that were suggested here," Wright said. "I knew I had spoken to him and he was clear."

​Wright has faced tough questioning from Bayne, who has painstakingly gone through emails related to a scheme in 2013 to have the Canadian public believe that Duffy himself had paid back his expenses. Bayne had argued that Wright forced Duffy to accept the deal.

The PMO had been attempting to quash the controversy that had arisen because Duffy, a P.E.I. senator, had designated his home in that province as his primary residence. That made him eligible to claim living expenses for his Ottawa residence, even though he spent most of his time in Canada's capital.

Members of the PMO, including Wright, wanted Duffy to agree to a deal in which he would admit he had made an unintentional mistake and say that he would repay the expenses, at the time thought to be $32,000.

In turn, Gerstein, who was chair of a Conservative Party fund, had arranged with Wright that the fund would be used to secretly cover Duffy's expenses. Duffy, by agreeing to go along with the plan, would have his name kept out of an audit being conducted by the outside firm Deloitte.

Duffy did go public with his admission that he may have made a mistake and would pay the expenses back. But the deal eventually went sour when it was learned Duffy's expenses included per diem claims and actually totalled $90,000.

Gerstein would no longer allow money from the fund to be used to cover the expenses. That's when Wright personally intervened with his own money, court has heard.

Wright's fifth day of testimony comes on the 41st day of Duffy's judge-only trial, which resumed last Wednesday after breaking on June 18. It was the second hiatus of the high-profile trial, which began April 7 in the Ontario Court of Justice in Ottawa. This third phase will continue until Aug. 28, and, with more time assuredly needed, break until it would resume again in mid-November.